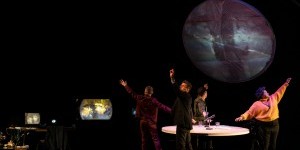 IMPRESSIONS: ONEOFUS’ "Jack and the Beanstalk" at Abrons Arts Center 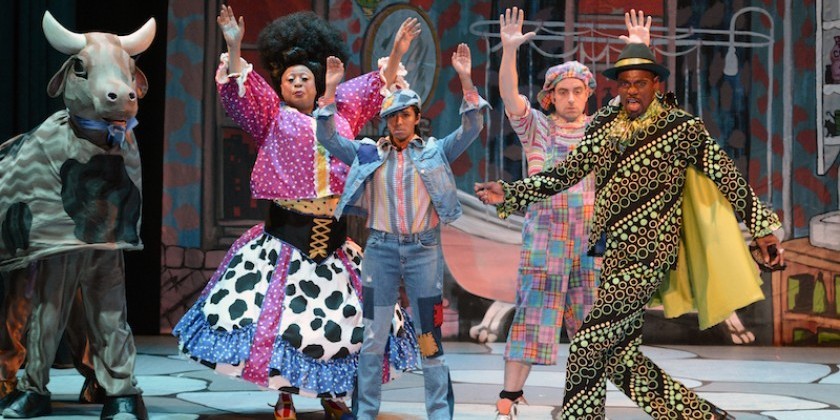 Jack and the Beanstalk isn’t the first fairytale that comes to mind during the holidays. Yet this is artist power couple Julie Atlas Muz and Mat Fraser’s holiday gift to New York. Branded ONEOFUS, the pair knows a thing or two about fables. After all, their X-rated Beauty and the Beast (2014) was a hit. Their shiny and new, Off-Broadway rendition of Jack and the Beanstalk, however, is a family affair.

Let’s be clear. This is no Nutcracker. This is pantomime or “panto” as the cool, cultured kids call it. The fairytale becomes an allegory brought to vaudevillian life complete with slapstick, drag, song, and dance. You remember the story: a poor, young boy is duped into trading the family cow for magic beans. Overnight, they grow a beanstalk so tall that it reaches the castle of the mean, child-eating giant who torments the town below.

The ONEOFUS version jazzes up a few details. It’s reimagined in the Lower East Side, in an area called Stoneybroke, complete with a Mayor De Blasé. As for the villain, enter Giant Rump. The creation of MacArthur genius Basil Twist, Giant Rump is a 12-foot puppet designed in Trump’s likeness right up to a pile of orange hair.

The performance is boldly eclectic from the outlandish costumes to the mashup of pop hits to the cast of 20 artists. Along with downtown and Broadway talent, the cast includes a Babe Chorus of local kids. The Babes’ standalone dance numbers, featuring hip hop, breakdancing, and acrobatic stunts, add innocence and that true community feel. It’s a welcome contrast to the nuanced, PG-13 comedy driving the adults’ action. This dynamic works well for the family audience. Children are encouraged to partake as their naturally loud, spontaneous, and curious selves. For everyone with a driver’s license, a healthy dose of double entendres, innuendos, and references to today’s political climate abound.

Our tour guide, Silly Simon (Matt Roper), initiates call and response games and solicits heckling of all kinds. Michael Johnnie Lynch has excellent comedic timing as the cow-print donning Dame Delancey, Jack’s mother. Both Lynch and burlesque dancer Dirty Martini (playing Mary the Good Fairy) captivate during their respective vocal numbers. But Hawthorn Albatross III’s performance as Giant Rump’s sly, debaucherous henchman steals the show. His caricatured portrayal of the “bad guy” shines through the incessant booing and hissing every time he’s on stage. What a surprise to learn this is Albatross’ acting debut.

Was the performance a little too long with a few stagnant patches? Sure. But the homemade, piecemeal feel is meant to be. The more polished scenes impress, like Lynch’s powerful “I’m A Woman,” while the amateur moments of fumbled lines or cautious singing remain endearing. The holiday flourishes are just plain fun. The image of Albatross taking five sudsy pies to the face at each refrain of “The Twelve Days of Christmas” will linger for some time.

How refreshing it is to see family theater revel in diversity. At the end, the (literally) glittering townspeople gather to celebrate a triple wedding in their newly liberated home. Equality, forgiveness, and inclusivity reign in Stoneybroke. This holiday message is apropos for everyone, young and old, living in today’s America.

The Dance Enthusiast Shares IMPRESSIONS/ our brand of review and Creates Conversation.
For more IMPRESSIONS, click here, including a review of Julie Atlas Muz and Mat Fraser's Beauty and The Beast.
Share your #AudienceReview of performances for a chance to win a prize.