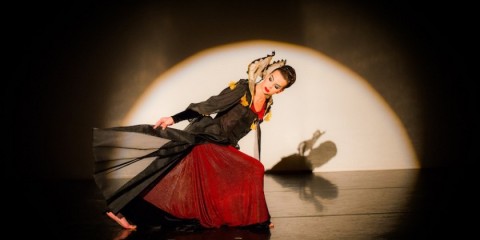 Published on March 15, 2017
Photo by JulenPhoto

If imitation is the best form of flattery, then Martha Graham (1894-1991) would preen with delight at Richard Move.

Move has been conjuring the spirit of Graham since 1996. Martha@20, the first of Move’s two-work program at New York Live Arts, which opens the Justin Vivian Bond-curated Live Ideas Festival, fetes her enduring genius and pokes fun at her indefatigable ego.

Calling Move a Graham impersonator, though, isn’t quite apt. They is (Move prefers the pronoun “they” coupled with verbs conjugated in the third-person singular) more an alchemist. Move unearths archival information such as quotes and videos and uses their own communion with Graham’s spirit to present a version of modern dance’s grand dame that’s steeped in historical accuracy yet tonally appropriate to 2017 — Lady Gaga is mentioned with a derisive twist.

Move, a majestic bun tacked to their head, is attended by former Martha Graham Dance Company performers Katherine Crockett and Catherine Cabeen. Unfolding like a lec-dem but with the zingers of stand-up comedy, Martha@20 cycles through Graham trivia and selections from her dances. Much of it will be familiar to anyone who’s sat through Dance History 101.

Richard Move as Martha in Martha@20; Photo by JulenPhoto

Move relates the impact of Graham’s Lamentations (she writhes in a cube of purple — grief externalized) on an audience member who cried for the first time after seeing it. Her Greek period (Cave of the Heart, Night Journey, and Clytemnestra) gets the Cliff Notes treatment with Move opining as Crockett and Cabeen give speedy, melodramatic performances.

While Graham’s choreographic legacy remains intact, she, as with many historical figures, can become two-dimensional, reachable only through photos and newspaper clippings. By enlarging her to three dimensions, Move presents Graham as she was and who she could be.

At intermission, disco thumps through the auditorium, and the promise of more arch fun feels imminent. It’s misdirection because Move is about to rip your heart out with the world premiere of XXYY.

XXYY acts as a meditation on the vulnerability of gender nonconformity. Its inspiration stems from Autobiography of an Androgyne, published in 1918 by Earl Lind, who was also known as Jennie June and Ralph Werther. The memoir exposes the brutality — both physical and emotional — directed at one transsexual in New York City.

The score by Martux-m with songs by Alessandro Moreschi (the only castrato to make solo recordings) haunts and the text from Autobiography of an Androgyne chills and the deconstructed steampunk costumes by Alba Clemente captivate. But it’s the sensual, postural dancing from Move, Cabeen, and Crockett that fully realizes the source material where one exists on the marginalia of society and in the liminality of gender performance. Move, in particular, imbues the shaking paces and swirling gestures with resigned melancholia.

One motif — a plié in first position, arms aloft with wrists touching — evokes a broken swan that can strain toward, but never assume, flight. When Move affects it, their face cracks in vacated hope and essential despair.

XXYY is timely and important. It’s also crushingly gorgeous. As we figure out how to combat the hate and ignorance that currently plagues our country, Move reminds us that beauty can slice deep into a heart and may be the most potent weapon of all.