Impressions (The Dance Enthusiast's Brand of Review) of Work Up 2.3 at Gibney Dance 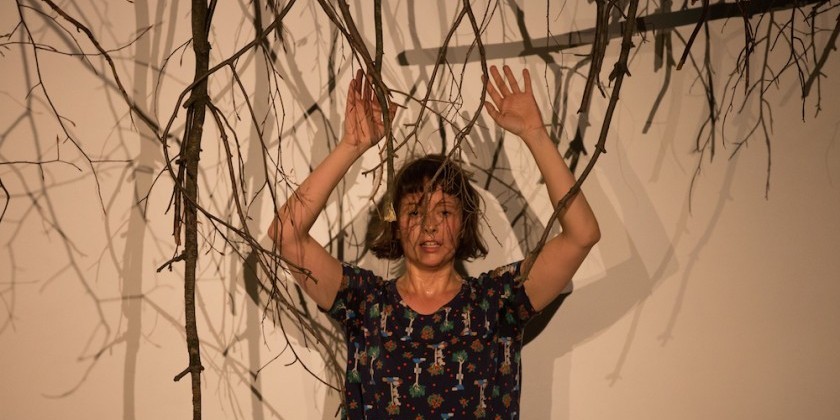 Published on May 25, 2016
Nora Stephens Photo by Scott Shaw

The third installment of Gibney Dance’s Work Up series presented two dances that were thought experiments made visible and one that introspectively considered visibility.

Randy Reyes’ solo, Never Arriving or (A B C D E — E D C B A) or † ∞ †, was a gentle, mournful exploration that touched on the cartography of his company’s name. The stage, littered with Christmas lights, a globe and various other objects, conjured both a messy bedroom and a debris-filled beach after a storm. Reyes turned the stage into a foreign land, but seemed uninterested in mapping it, leaving the audience wondering what was trash and what was significant—and if there was a difference. He only interacted with a very few of the objects while the rest remained inert. Notably, he balanced a long wooden beam across his wrists as he moved, creating a quality that was simultaneously delicate and weighted. 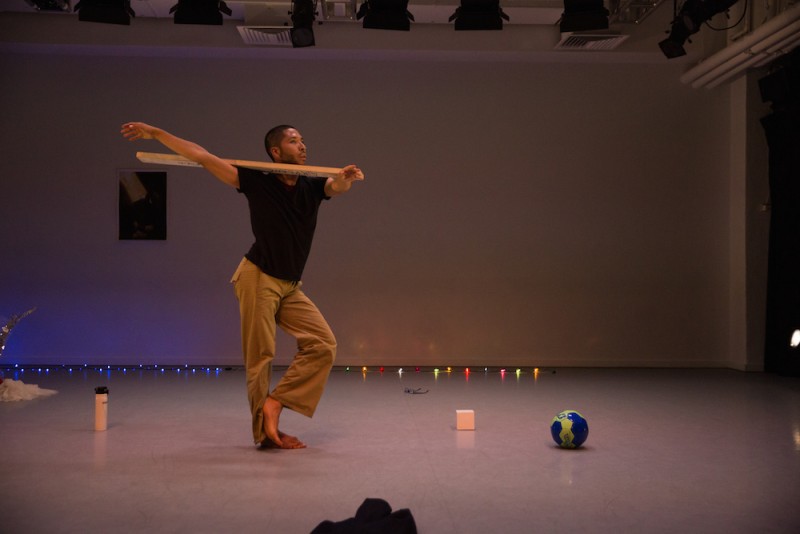 Three-quarters of the way through, Never Arriving dramatically changed tack. A projection appeared against the upstage wall, showing people walking up the steps of the central monument at Columbus Circle, sitting or standing for a moment, and then exiting the frame. At first, it seemed that something was about to happen. But it quickly became clear that the film was voyeuristic—no one did anything “worth” seeing, but the audience stared anyway. Just as dramatically, Reyes reappeared, this time dancing like nobody was watching. His chest pops and voguing arms, performed in semi-darkness, created the same feeling of voyeurism as the film.

Reyes transformed vividly throughout this work, but I had hoped to see more development—especially considering how many suggestions and possible routes he laid outfor himself within the set design. 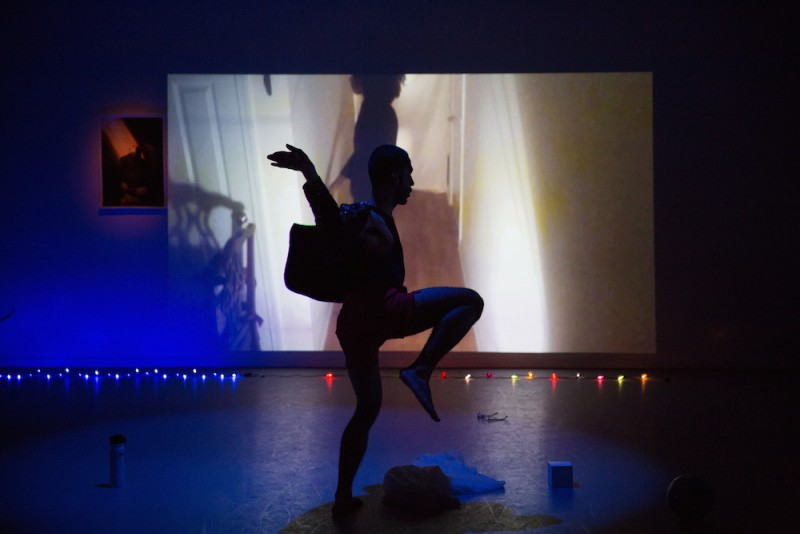 In Mayonnaise, Conner Voss (who uses the gender-neutral pronouns “they/their”) and Morgan Wallace attempted to use performance art as political commentary, forcing a confrontation about reparations for Black Americans.

The house lights came up as the two of them sipped cups of tea and quietly chatted with each other. Eventually, Voss approached a young man in the audience and asked if he would stand up. The man obliged, and Voss sat behind him, in his seat, and gently laid their forehead against the man’s belt. Just as gently, they patted him down until they found the man’s wallet. After pulling it out of his pocket, Voss returned to the stage and rifled through it in front of the audience, removing the cash. They repeated the process with an older man. 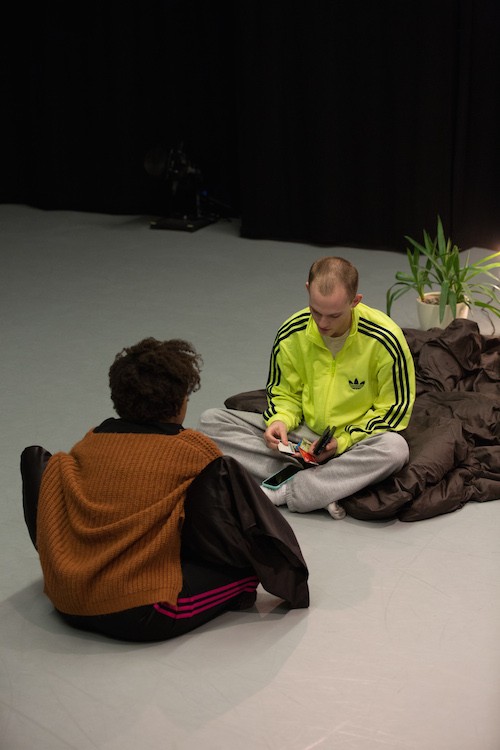 After Voss retreated back to the stage for a second time, they asked the first man if he believed he had earned his money. The young man admitted that he hadn’t earned it—his parents gave it to him. Voss then asked the same question of the older man. He confirmed that he did believe he had earned it. Voss immediately pivoted into questions about reparations: Did he feel obligated to repay the wealth he had accumulated through the exploitation of others? Did he feel a particular debt to Black Americans? Did he believe imperialism was still happening? Did he think he owned his money? The man generally expressed autonomous ownership over his wealth and denied that imperialism is an ongoing process. It was incredibly uncomfortable to witness a white man uphold the belief that his wealth had accumulated in a bubble, free from exploitation and oppression. It seemed that Voss had set up a perfect moment to suddenly use performance as a tool for social justice. 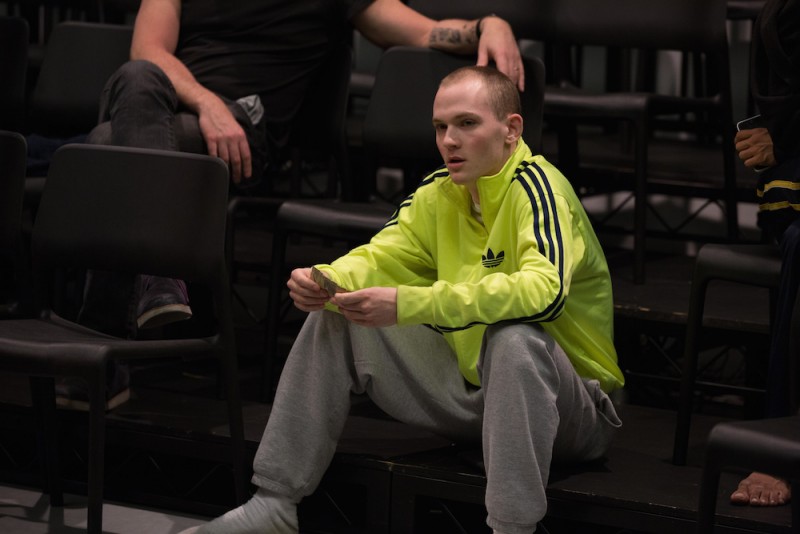 Instead, the situation lurched, veering into unproductive territory. A different audience member, perhaps reacting to his feelings of discomfort, started questioning Voss about their own contributions toward reparations. Their accusatory, defensive back and forth ate up the rest of the performance. Rather than achieving education, white guilt and fragility took center stage in a conversation that was supposed to be about oppression borne by Black people. It’s important to note that Wallace, a Black woman, barely spoke during the performance. The irony of her relative silence seemed to go unnoticed by Voss.

As the lights went down and Voss and Wallace exited, the audience collectively realized that the two performers had disappeared with the audience members’ cash—which they didn’t return.

The conceptual structure of the performance was surprisingly elegant: In stealing from their audience, Voss and Wallace mirrored the relationship between colonizers and their subjects, pointing out that everyday life under capitalism can be theft. But despite its palpability, their intention was unrealized. They were unprepared to handle the situation they created, and so Voss resorted to shaming in order to retain the upper hand. Shame as a social justice tool is always unsuccessful because it recreates the damaging power dynamics that are being questioned in the first place. I would be very curious to see this piece expanded into a teaching method, but it needs an overhaul and a bit of humility first. 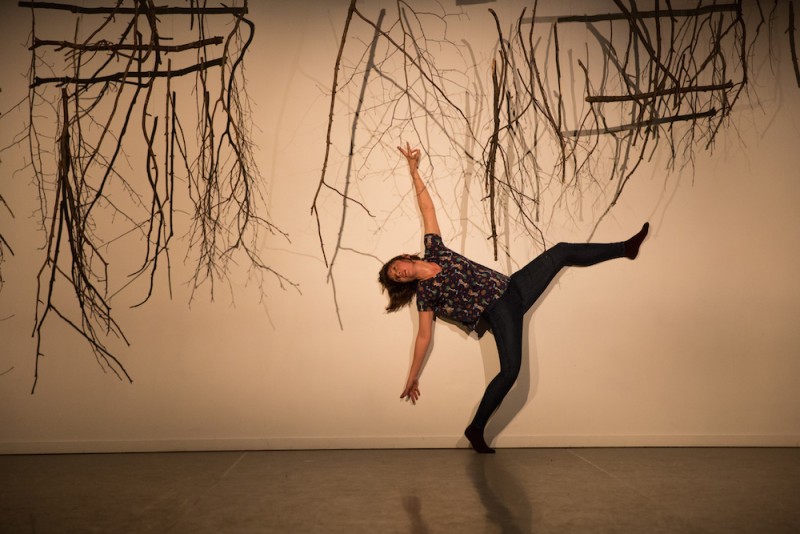 The final performance of the evening, Nora Stephens' Living with Trees had a hard time following its somewhat disastrous predecessor. However, Stephens cheerful personality managed to dissipate the remaining tension.

Living with Trees was either unselfconsciously twee, or fully in control of its irony. It was hard to tell. Stephens' costume (a shirt printed with woodland creatures), her set design of rustic branches and her singing instead of talking reminded me of a kooky Wes Anderson character. Her technique was weak and the technical steps were few enough that this piece would be better off without them.

When she invited an audience member to join her, turning her solo into a duet, the result was a sweet, real-time exploration of teamwork and artistic choices. The pair danced together after a brief conference to determine the work’s remaining structure, and ended the evening on a happy note.