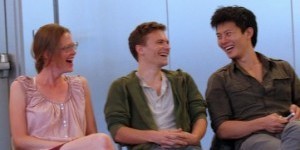 Sharing Ideas of Performance Across Borders and Disciplines at Earthdance

Go then and make of the world something beautiful, set up a light in the darkness. –Normandy Ellis, Awakening Osiris

Since the much-heralded, New Age-heralding “Great Convergence” of 2012 came and went, societies around the planet have continued to be seized up in one dispiriting crisis after another. Economic turmoil. Natural disasters and escalating environmental peril. Large-scale acts of violence. Political instability. Flare ups of resistance to social justice. The beat, in other words, goes on.

And it takes someone with the appetite and steady patience for process to see through all of this mess to the inner workings of personal and social transformation. It takes, perhaps, an artist.

Certainly Jawole Willa Jo Zollar (Founding Artistic Director and “Chief Visioning Officer” of Urban Bush Women) and Liz Lerman (Founding Artistic Director of Liz Lerman Dance Exchange) have faith in artists and in communal creativity. Their combined histories of progressive, community-minded dancemaking and dance-sharing serve as a living textbook for how to use art’s tools to make a difference in people’s lives.

On October 12, the two choreographers convened a small group of people for a free “discussion and presentation” at Harlem Stage’s Marian Anderson Theater in Aaron Davis Hall, “related to the Great Convergence.” For this 90-minute gathering--Blood, Muscle, Bone: the anatomy of wealth and poverty, one of the final offerings of the citywide Blink Your Eyes: Sekou Sundiata Revisted festival--participants sat onstage with our backs to the empty hall. We faced the two facilitators and a trio of dancers and, at times, were invited to converse with one another and to make meaningful physical gestures.

Blood, Muscle, Bone cohered for me more in retrospect as a germinating idea than in actual execution. As Lerman noted, the topic of economic inequity is “loaded and not something people want to get out of bed and rush to the theater for.” True enough. Unfortunately, Zollar and Lerman’s introductory remarks, rather than guiding us into the topic, seemed scattered and ineffective.

In one example, Zollar challenged us with a riddle on the names Jefferson, Washington, Lincoln and Jackson, a gambit that remained mystifying, despite her giving the answer: “The last white men to have those names.” She might have meant to take us somewhere, but the point of her riddle was unexplored, quickly dropped.

The “chat with your neighbor” activity--about various types of resources that can be considered community wealth, like creativity or political agency–was too rushed for depth or useful complexity. Asking participants to make gestures to represent things like how our grandparents thought about wealth seemed, at best, a lovely way to give Zollar and Lerman material for their work-in-progress. Perhaps some of us could take away a sensation, an insight, from this exercise, but no time was allotted for the contemplation or sharing of it.

At the end, Zollar and Lerman directed us to reverse the direction of our chairs and face the theater’s hall. Surprise! The three dancers appeared high atop the hall’s balcony, writhing and ducking like characters in a puppet show accompanied by Baroque music. The purpose of this choreographed segment, in the context of “the anatomy of wealth and poverty,” remains unclear.

Heading home for dinner, I thought about how, late in the session, Lerman replied to one woman’s remarks. She said, “Getting people to accept multiple ways of looking at things is challenging.”

There it is, finally. What artists do as well as they breathe. And why artists rock. And why art belongs in our political discourse.

Impressions of: "James Brown: Get on The Good Foot, A Celebration in Dance" at The Apollo Theater