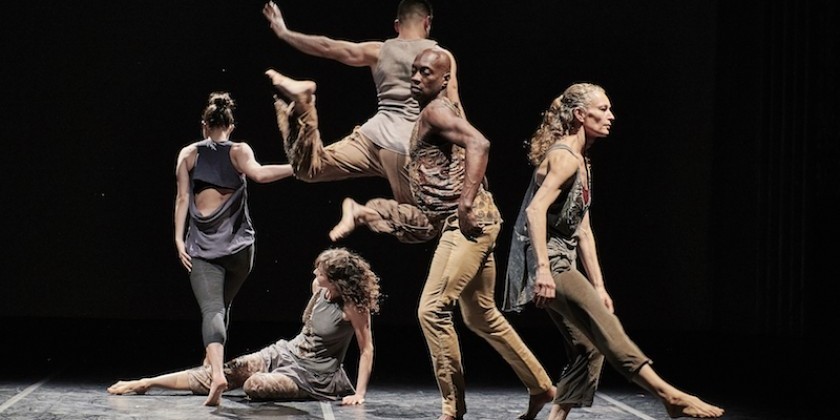 From the start, it’s all about family at Jane Comfort and Company’s 40th Anniversary Retrospective. In the opening film, For the Spider Woman (1979-1980), Comfort casually leaps and scampers as each clip charts her pregnancy with her son, Gardiner. Her belly gets bigger; her movements grow slower; until, at the end, she clutches the baby to her chest while she slowly rocks from foot to foot.

When she bows, Comfort does so with Gardiner, now a man nearing forty — an explicit hint at the retrospective’s purpose. While it superficially celebrates Comfort’s oeuvre, it also acts as her tribute to her many collaborators, whom she calls her family.

The show has a breathless feel, four decades of art and ambition stuffed into two hours. Interspersed among the excerpts and short works are video interviews of Comfort, footage from original performances, candid family films, and photographs of dancers past and present. The programming reflects that some compositions may clash with 21st-century mores (only judiciously edited clips from the provocative Deportment are shown). Others prove too complex from which to extract. Even with these strictures, the ten pieces presented at La Mama’s Ellen Stewart Theatre display one artist’s preoccupations with gestural specificity, communal exchange, and sly commentary on gender, race, and identity.

The push and pull of discourse, both verbal and physical, appears again and again. In Four Screaming Women (1982), first a duet and then a quartet spar with each other. They trade lines like “Did you win?” while raising their arms in a victory salute, and they demand “I want!” while pulsing their pointer finger. During Street Talk (1984), Cori Marquis and Javier Perez (my MVP for his explosive energy) flaunt the keeping-up-with-the-Jones consumerism of the ‘80s. With aerobic prances and kicks, they, just barely, stay on top of Auchee Lee’s punchy drumming. Altiplano (2015) forgoes confrontation for cooperation. Nine dancers churn in a kaleidoscope of clasping hands that shift into reclining lunges that become handstands or, sometimes, a hug.

Comfort inverts traditional expressions of identity to reveal internalized biases. An excerpt from Faith Healing (1992) stitches together iconic scenes from movies and plays into a tapestry that’s, at first, comic and, later, thought-provoking. The pièce de résistance is Mark Dendy’s portrayal of Amanda Wingfield from The Glass Menagerie. He affects the mannerisms of a Southern belle — overwrought politesse, reflexive flirting — to point out the plight of women whose heightened femininity keeps them dependent on men to feel valued.

S/He, Comfort tells us, was her most requested revival — for good reason. As relevant as ever, it recasts the genders and races of the protagonists and antagonists of Anita Hill’s testimony during Clarence Thomas’ confirmation hearings. The brutal interrogation of Hill (Sean Donovan, who ends naked in a pile of pale limbs and crushed objectives) by Black women playing white male senators seems even more harrowing in the deluge of #MeToo stories.

Comfort’s longevity may be due to her eagerness to welcome collaborators into the fold. Besides her committed performers — some, like David Neumann returned for the show — she often joins forces with other gifted creators.

Americana singer/composer Toshi Reagon contributes scores to Underground River (1998) and Asphalt (2002), both of which are excerpted here. A dance opera about coping with childhood trauma, Asphalt unleashes an arrow to the heart. In a home video filmed by her son Gardiner, Comfort gushes about the standing ovation it received — a rare moment in any artist’s career. Other stars in Underground River are the puppets of Basil Twist. A Gumby-esque marionette jigs when manipulated by performers as they syllabically vocalize à la Meredith Monk.

For all the thematic perpetuation, another arc emerges in juxtaposition — Comfort’s transition from effusion to contemplation. In the penultimate You Are Here (2016), spines waver, arms swing, and abstraction reigns. The mood, enhanced by Brandon Wolcott’s gurgling score, resonates as a meditation on interiority, dancers navigating personal journeys among the fray.

A moment of wit segues to the finale, Amazing Grace (2018). Darrin Wright, rapt in an outburst of movement, cringes when he turns to find others watching him.

Soon, the stage fills with bodies as a microphone stand is placed center-stage, a MAGA cap hanging atop it. Donald Trump’s voice booms through the theater in a recording of the speech where he accepted the GOP presidential nomination. Marquis counters this by singing “Amazing Grace” as the company glides through lyric-evoking gestures. And just like that, everyone — audience, cast, and crew — becomes a family united against hate and bigotry because of one resilient matriarch.

The Dance Enthusiast Shares IMPRESSIONS/ our brand of review and Creates Conversation.
For more IMPRESSIONS, click here, and for our feature with Jane Comfort, click here.
Share your #AudienceReview of performances for a chance to win a prize.