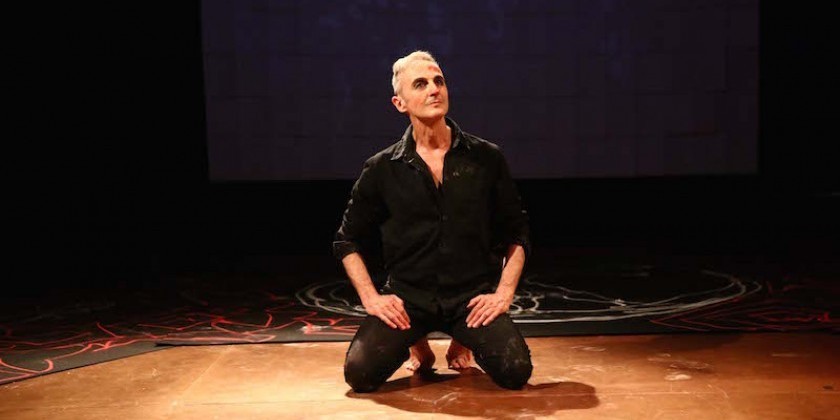 Kelly prepares the space by folding pieces of cloth to place on a bench against the wall. He matter-of-factly walks back and forth draping material on hooks, arranging shoes, and sliding a red rope across the floor. He occupies a wooden chair tucked underneath a desk that’s adorned with a black notebook binder, tiny wooden figurine, and microphone. White block text scrolls on a large screen upstage center, detailing Kelly’s artistic beginnings, “A young boy from Jersey comes to New York City to see the Cockettes in 1971 . . .”

Two projection screens hover in the back corners of the space where calendar years appear and fade. Kelly sits silently, flourishing his fingers in front of his face, until 1976 remains etched. He reads memories from the 1970s in the binder, fast forwards to 2017 with mention of the movie Arrival, and then rochiets back into the ‘70s. Our focus seamlessly vacillates between the past and the present.

The piece segues from text to movement when a female ballet dancer in a tutu dances across the large screen. Kelly breaks his trance from a flickering light (as if watching TV) and enters the space leaving a trail of white footprints in his wake. It feels reminiscent of a Family Circus comic strip where the child’s journey is traced for all to see.

Kelly pliés. Ballet’s idealism melts into imperfection as his knees bend inward and almost touch. He confesses he started ballet at 17, and his body would not yield to ballet’s expectations.

Repurposing the use of his body and mind, Kelly turns to visual arts. He extends his limbs to trace a rectangular outline in chalk. During another moment, he sketches a circle around a pool of light and connects the edges to reveal Leonardo da Vinci’s The Vitruvian man.

As he remembers losing friends to AIDS and his own HIV diagnosis, Kelly uses his body to create four outlines on the floor. He adds spirals of red chalk around the overlapping extremities to connect the corresponding forms. They become the blood pumping through the veins of the work.

Among the tribulations there is also joy. Kelly’s drag persona Dagmar makes a wistful and romantic appearance. Later, he even sings a duet with a projection of his 1992 self.

Kelly ends by gingerly pulling the red rope behind him as if it is a symbolic talismen where blood memory and stories intersect. While this performative memoir finds collective histories through the individual, this history is framed within a white, male, queer lens of the ‘70s and ‘80s East Village. Nonetheless, sharing and remembering is important, which likely prompted Kelly to recently invite the young queer community to continue the conversation via Facebook.