Performances continue from May 19-21

For tickets go to Danspace Project

If you’ve lived in New York for two decades, you’ve seen some changes. Big ones. As people have poured into the city, previously ignored neighborhoods have shape-shifted into hot commodities. Nowhere is this more apparent than Williamsburg, Brooklyn. Attracted by low rents and proximity to Manhattan, artists gravitated to the area and refashioned it into a hip enclave. Now, there’s a Starbucks and a City MD on Bedford Avenue, a hop, skip, and jump away from the soon-to-be-beleaguered L train.

Choreographer Juliette Mapp has lived in Williamsburg for a number of years and witnessed firsthand its drastic gentrification and commodification. In Luxury Rentals, which received its premiere at Danspace, she braids together two strands from her life: going to and from her son’s preschool in Bedford-Stuyvesant (another gentrifying neighborhood) and being a Movement Research Artist-in-Residence to reflect on community — the kind you create and the kind created for you. 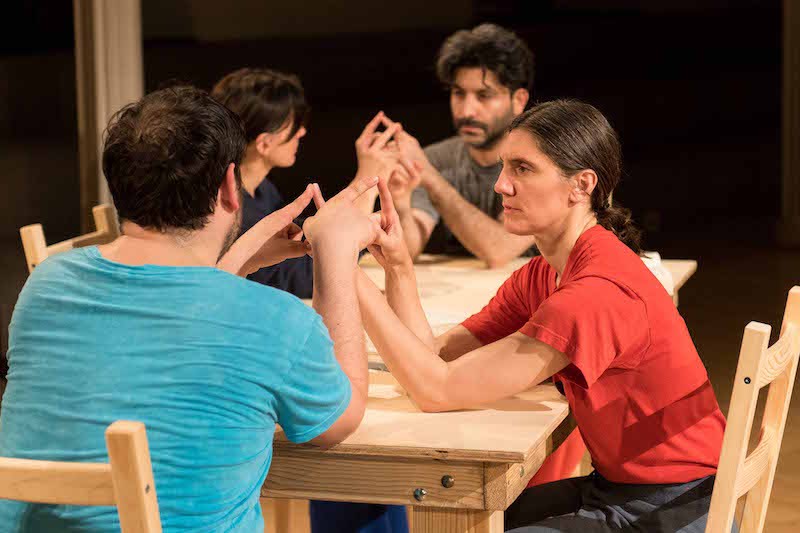 Luxury Rentals creates community by sharing space. Mapp, Levi Gonzalez, Kayvon Pourazar, and Jimena Paz press palms together in intricate versions of pat-a-cake. They hold hands and step in a small circle; they rhythmically skitter and stomp. One dancer reaches out a pointer finger like ET. Another reciprocates.

Luxury Rentals creates community by sharing time. An adult-sized version of a blocky nursery table and chairs rests downstage, and the cast gathers around it, legs splayed, shoulders slouchy. They gaze at a small clock like kids stuck in an endless time-out. Another time, they flip apathetically through books. There are occasional dance breaks to Daft Punk’s “Get Lucky.”

Luxury Rentals creates community for Mapp. During an ostensible re-creation of a Movement Research Artist-in-Residence meeting, Mapp discusses the random and jarring events that occur during her routine to drop her son on and off at preschool. To New Yorkers, these will sound depressingly familiar: the creep who yells obscenities, a recalcitrant landlord who refuses to fix the heat, a subway jumper. She pads these narrations with the questions and commentary of her young son, who manifests the brilliance and naiveté of every four year old. 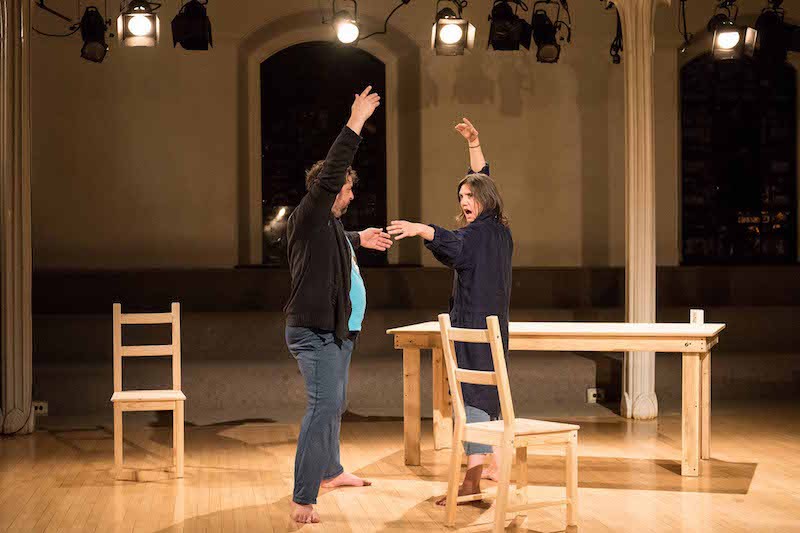 The work shuffles on like this for sometime: prosaic gestural sequences, Mapp’s anecdotes, more slumping around the table, some writhing on the floor in the fetal position. About four-fifths of the way through, the cast ghosts to the sidelines and watches an arbitrary black-and-white film of rehearsal footage. Ninety minutes later, an eon in kid time and about as long in adult time, it’s done when the four take their places at the table, for, perhaps, another meeting.

“The context of no context,” shouts Mapp. It’s an idea pioneered by George W.S. Trow in 1980 that suggests American life is increasingly isolated and determined by commercialism. Today’s doomsayers would surely agree, pointing to our smartphone addiction and Amazon devotion. But while this may feel true to Mapp as she pilots the ever-changing streets of her longtime neighborhood, it seems that she’s operating within another context — her role as mom. Her yarns take on the epic proportions of a quest as she attempts to shield her son from the uncertainty and casual violence of everyday life. The more communities change, the more communities stay the same.