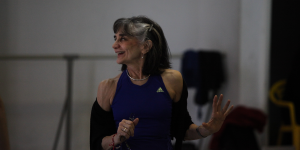 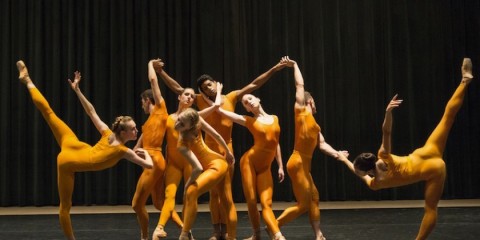 Can you separate the art from the artist? With Kathryn Posin, you get the feeling there’s no distinction between the dances and her. She must be just like her work: dainty, exuberant, sincere, and with the occasional flight of fancy that only makes sense to her.

Posin’s three-work program opens the five-week Harkness Dance Festival at the 92Y. Her terrific seven-member company plus guest artist Amar Ramasar, a principal from New York City Ballet, do some heavy lifting — both literal and figurative — throughout the evening. Perhaps an even bigger draw than the dancers is Meredith Monk who, along with Theo Bleckmann, sings selections from her 1990 album, Facing North for Posin’s Climate Control, a premiere.

Two of the pieces celebrate the evocative power of dance. In Century Rolls (2014), eight hot-to-trot performers in sleek marigold costumes whiz through blistering small jumps and swishing high kicks. Waves (1975), the gorgeous yin to Century Rolls’ yang, meditates on the impermanence of water: A septet ripples and rolls through kneels and yearning gestures. As one undulating organism, they drift apart and reform to land where they started.

The middle piece, Climate Control, takes a hard left from these pure dance numbers. It seemingly details what would happen if Alaska (or some other warren of cold weather) met and then fell in love with Hawaii (or any balmy locale). Yumelia Garcia (in Nanook of the North chic) and Cristian Laverde König (bare-chested with a skirt of silver tinsel) play the polar-opposite couple. König hoists Garcia in some lovely lifts, and they express amazement at various technologies from their respective cultures. Their two posses and one broom-pushing reindeer add to the shenanigans, which include tentative outings on skis and a surfboard. In the end, the seven dancers blend fire and ice to refashion themselves into what resembles a land-locked troupe of Ice Capades. It’s about as head scratching as it sounds, and its earnestness prevents it from fully embodying its witty potential.

Posin works within the framework of academic ballet, but her ballet beats with a jazzy heart. She delights in taking the obvious — a developpé, in some instances — and flipping the wrist and flexing the foot. This cheekiness infects not just the content but also the style. Everything, from flittering brisé volés to perky temps de cuisses, twinkles like a star to wish upon.

Her dancers navigate the demanding choreography with the mouth-set determination of seeing a very hard class from beginning to end. Mostly, they succeed. Yumelia Garcia balances for almost a full minute in arabesque after König releases her. Daniel Baker belies his sturdy physique with a molten execution. Ramasar scorches in a blaze of chainés, but his tense shoulders and ferocious glower render him into the resident grump. Monk and Bleckmann captivate throughout Climate Control by augmenting their vocal gymnastics with tender gestures. During one cutesy moment, they hang out behind a small bar (dubbed the Arctic Bar after Monk’s piece from Facing North) and swig from amber-hued bottles.

Posin debuted her choreography in 1967 at 92Y, and almost fifty years later, this feels like a well-earned champagne toast. Choreography — particularly the kind Posin creates, which requires care in its visual, aural, and kinesthetic components — isn’t easy even in the best of times, and Posin continues undaunted without losing her sparkle.