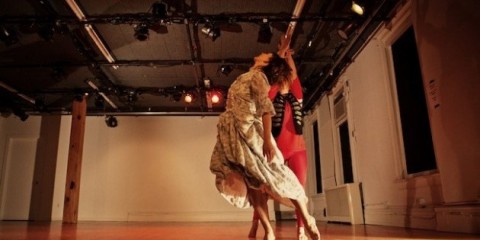 Pyle — sporting lavender locks, a sparkly frock, and two bright circles of blush on her cheeks — is a Lesbian Princess on a journey of self-discovery. In a magical forest, depicted by Hedia Maron’s delightful video, she chances upon a Tranimal, half boy/half animal. The Tranimal, a sloe-eyed Jules Skloot, and the Princess awkwardly pursue a romantic connection, exemplified when he detaches his red feather earring and scribbles his number on her hand. This burgeoning courtship ends on a sour note, but the Princess soon rediscovers the Tranimal, in his prince form, kept in a harem by a domineering Sorceress. The Princess’s attempts to free her Tranimal fail and he perishes, only to be reborn in a blazing climax. Spunky narrator, Sacha Yanow, helps befuddled audience members follow along.
While there’s not a pointe shoe in sight, Pyle evinces a deep appreciation for classical ballet. In an opening solo, she executes springy pas de chats and a handful of snappy fouettés with textbook precision. The first appearance of the twelve princes suggests a hat tip to La Bayadère’s “Kingdom of the Shades.” Each prince steps onto a raised stair to perform a sequence of delicate port de bras before another appears behind him, replicating the sequence.

The princes, in ballet’s uniform for boys — white t-shirts and black leggings, exhibit a graceful virility. Unlike the virgins that populate traditional works, this “corps de ballet” freely experiments with sexual desire. In one scene, the twelve princes frolic with pieces of fruit. Tossing and sniffing each other’s fruit, they form a line downstage and thrust the produce down their pants in a burlesque send up.
The Firebird, A Ballez is uneven in places. Carol Mullins’ lighting design often overshadows Maron’s video, and some of the staging obscures pivotal sequences. Most noticeably, the technique of the corps de ballet ranges wildly; several dancers have a firm grounding while others are novices. Childlike abandon replaces ordered exactitude — which may be the point. This variegated group attacks steps and strikes poses with an expansive innocence.
Pyle and her dancers perform jubilantly and affirm that ballet, historically rigid in its depictions of sexuality, can embrace queer culture.
Share: