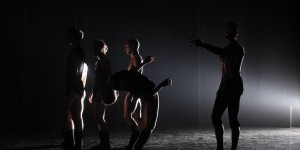 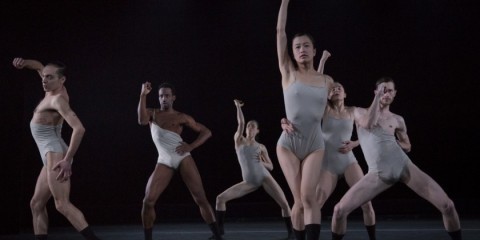 To the sound of a strong repetitive beat, six silhouettes face upstage in dim bluish light. Arching backward, each body in a loose gray leotard displays apparent effort through every muscular limb. No action is flippant or casual. Moving deliberately but without uniformity, the dancers distinguish themselves as individuals right out of the gate. You want to watch them all, but you’ll have to pick.

Love Chapter 2, Sharon Eyal’s latest creation for her company L-E-V, is a feat of stamina and carnal physicality. L-E-V’s movement vocabulary stays true to the Gaga roots common in the work of Ohad Naharin and Batsheva Dance Company where Eyal was a member for 18 years. Grounded in exertion, all actions stem from deep within and extends to a full expression. Arms span far past a shoulder’s range, stomachs pull in and up to reveal every curve of the ribcage, hands and feet tense to display the veins and tendons beneath.

This physicality evokes both awe and disturbance. The performers writhe, always about to fall off balance or crawl out of their skins. The movement is not about space  — no locomotion or sweeping pathways. In ongoing step with the music, perched on the balls of their feet, they navigate only the scope of their own bones and organs. Nothing is at rest.

The electric quality of their movement begs a close-up focus on one performer rather than zooming out to see the overall composition. Within the shifting formations of six that largely make up Love Chapter 2, you are never directed where to look. Even when an undulating body breaks off in solo, the eye is drawn by competing forces. Featured moments can be easily missed. It’s a bit of a “choose your own adventure,” created both by a dancer’s ability to hold interest and by the nonstop, in-place motion that aims to match an escalating techno soundscape.

DJ Ori Lichtik plays his entire score live but out of view, supplying the trance that traps and tosses L-E-V’s performers. His presence is so tangible that you find yourself trying to locate him. Put accurately in the company’s program notes, “‘L-E-V’ could be equally at home at a techno club or opera house.” The shared pulse of sound and movement delivers the same communal power and drive you might find in the pit at a concert. As audience, your body takes on the same rhythms you are witnessing.

Love Chapter 2 presents some recognizable gestures of heartache that hint at an underlying narrative. Dancers grab their throats as if trying to speak. They skitter sideways like a shiver up the spine. They clutch and claw at themselves. In one undeniable solo, dancer Mariko Kakazaki is knocked side to side as the collective punches at the air near her head. Beyond these motifs, little else illuminates the story — dancers neither make eye contact nor touch one another but instead cope as lone wolves. Eyal’s thesis on love, if there is one, remains concealed.

Just when an accumulation of steps heralds a grand finale, the curtain drops on the piece mid-sentence. Without winding down, the long-held pace snaps in a satisfying and surprising ending that suggests this haze will go on without end. The house is now quiet; you immediately wonder if the six dancers have collapsed in a sweaty heap. It seems anything beyond the tight hour would have been too much to chew. Something about Love Chapter 2 has exhausted you as well, even though you never moved an inch.