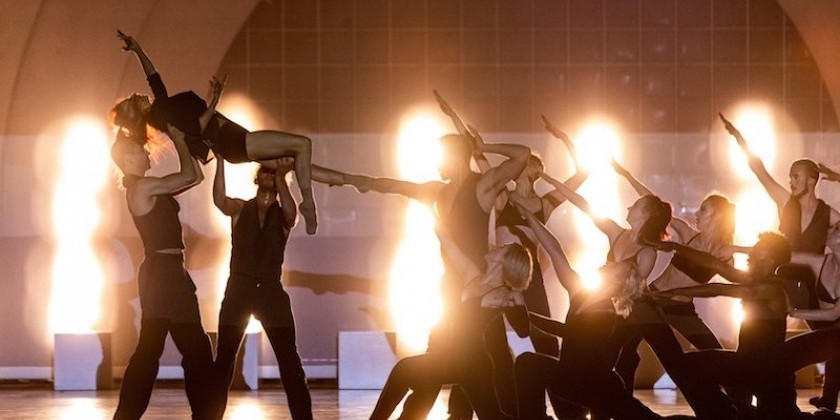 November 7, 2016 was a dark day indeed. At 82 and suffering from leukemia, Leonard Cohen died after a fall in his home. The world grieved for the singer-songwriter who probed the raw ingredients of life for truth and meaning. Using a voice that was like pilled satin, he instructed us in love and loss, in god and goodness.

Although Cohen would neither release new music nor grace a stage again, an artist of his caliber never truly dies. He left a legacy that can be rediscovered and engaged with, which is exactly what Les Ballets Jazz de Montréal under the artistic direction of Louis Robitaille does in Dance Me. Presented as part of BRIC Celebrate Brooklyn! Festival, the 80-minute piece acts as an homage to Cohen, who, a native of Montréal, approved its conception before his death.

Andonis Foniadakis, Annabelle Lopez Ochoa, and Ihsan Rustem contribute the choreography, which, at its best, reveals the capacity of Cohen’s music for diverse interpretations. Taken as a whole, though, the effect is patchy, the seams showing among the artistic responses of percolating gestures, a video of red lips that looks pulled from a Twizzlers commercial, show-stopping group numbers, and a couple of poles deployed for dancers to twist and jump around. Dance Me ends, predictably but not disappointingly, with “Hallelujah,” the company gathered onstage, sober and reverent.

Jayson Syrette, attired in a dark hat and overcoat, emerges as the through-line. He roams around the stage, sometimes stopping to watch. Although he evokes Cohen, his ramblings lack narrative purpose and, thus, add little beyond atmosphere. Eventually, Syrette is absorbed into the tide of movement, just another face in the crowd.

Like every other contemporary ballet, Dance Me transpires as a surge of brief episodes. Duets flow into splashy group numbers before being overtaken by small assemblies of dancers rolling on, soaring over, and skimming across the floor. The fevered tempo blunts the impact of the twisty, tricky phrases, which are easy to appreciate in the moment but difficult to reconstruct later. The most striking moments are the simplest — prone dancers flicking their legs in the air like an upside-down kick line or a performer bumping her head against her partner’s chest like a lovelorn goat.

Sex sells, and at first blush, the sex being sold here is pretty sexy. The luscious 14-person cast flaunts plenty of skin as they sport half-buttoned white dress shirts and suits with no shirts. The men are often topless, the women barelegged. Chests glisten and hair flies, yet the performers stay so cool, so contained that the eroticism registers more as a coy marketing ploy rather than a primal, undeniable urge.

All that skin rubbing up against and sticking to other dancers’ skin materializes in the many, many instances of partnering. These sensual couplings begin to feel clichéd as the dancers repetitively clutch at each other’s bodies with splayed legs and rippling spines. Ihsan Rustem’s “Suzanne,” though, exposes the softer side of sex in an exquisite duet performed by principal dancers Alexander Hille and Céline Cassone. Hille wheels Cassone around and above his body; she rarely alights to the ground. To love and be loved involves caretaking, lifting another up, allowing oneself to be lifted.

The dancing exists on top of Cohen’s music, rarely dipping below the words to elevate them. Yet this reads more as a nod to Cohen’s inimitable skill rather than a choreographic shortcoming. For all the spectacle (the best of which is Andonis Foniadakis’ jazzy spree to “First We Take Manhattan”), Dance Me overwhelmingly succeeds at its purpose — to celebrate the music of Leonard Cohen.

The Dance Enthusiast Shares IMPRESSIONS/our brand of review and Creates Conversation.
For more IMPRESSIONS, click here.
Share your #AudienceReview of performances for a chance to win a prize.