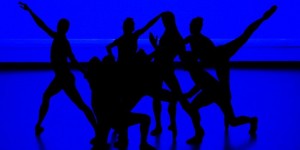 What is the point of making a climate change ballet?

At first, I was skeptical. How can a proscenium contain the vastness of an environment in danger or convey the human-landscape integration necessary to alter our ideas about the earth’s needs? Ballet provides a delicate yet powerful vehicle for stylized storytelling. Contemporary ballet, specifically, breaks down formal aesthetics to address issues of the current moment.

For Diana Movius, recycled contemporary ballet tropes can serve a political agenda. Her MOVEIUS Contemporary Ballet performed Glacier: A Climate Ballet and Other Works and tackled well-known calamities: climate change, obviously, and the 2008 financial crash. This bill was performed as an official part of Climate Week NYC.

A pale blue swath of fabric hangs in a triangle upstage to suggest an icy landscape. The dancers dart and fall, weaving mesmerizing patterns. Projections glaciers doing glacier things (melting, mostly) appear on the scrim, melting as the dancers change their movements. Instrumental pieces by Max Richter, David Lang, and Andrew Thomas blend into a sonic landscape of driving rhythms and repeated melodies. The shuddering delicacy of three women boureé-ing slowly across the stage evokes the shifting ice. The fragile formalism of the dancers’ lines matches the frozen profile of the glaciers in Robin Bell’s video montage.

Movius tells the easy, true, and relatable tragedy of polar bears losing habitat through a 10-part structure as the dancers demonstrate the anatomy of the ice as it disappears. “Glaciers” and “Ice Sheets” are full of canons and tableaux evoking the shapes and movements of the polar environment. “Meltwater,” rendered beautifully by Emily Hashiguchi, drips with petit allegro flourishes like the foam on running water. “Sea Ice” is flickering and angular. “Calving” and “Icebergs” show off the thrilling virtuosity of Noah Strand and Amr Mohyeldin as they leap away from the ensemble. “Polar Bear,” embodied by the lanky Adam Chavis, emphasizes the popular image of a big bear as a noble victim of lost habitat. “Time,” “Melting,” and “2050 AD” spell a watery doom for humanity. As the lights dim on the now-melted dancers, my skepticism dissolves too. We must use the tools we have to relate to the disasters at hand.

Next came Rite of Spring, Crash of Fall, a reckoning with two devastating phenomena: Stravinsky’s notorious 1913 orchestral piece, The Rite of Spring, and the 2008 financial crash. Movius puts as much hair-tearing and anarchy into the piece as in the real events. Carrie Denyer, Sarah Bradna, Etta Hulcher, and Kamilia McCracken skulk, gloat, and plot as The CEO and The Bankers while Giovanna Montoya, Noah Strand, and Emily Hashiguchi cower, protest, and commiserate en masse as The Civilians. Kimberly Thompson flexes her acting chops as the Whistleblower, appearing at the end with an OCCUPY sign hoisted high. The piece, though humorous and relevant, couldn’t stand up to Stravinski’s monumental score. The choreography lacks the narrative simplicity and lush movement variety that other variations on Rite have delivered.

Ground Control closes the program with a fanciful and fluffy reflection on early pictures taken of the earth from space. Set to a twinkly, nuanced score by Mason Bates, backlit by videos of the earth and the moon, and accented by shimmery lamé costumes by Kimberly Thompson, it looks like Balanchine’s Jewels, as seen from space: sparkly, but too familiar. Standout moments are a moonwalking pas-de-deux featuring Chavis and Talya Krumholz and a starstruck duet between Mohyeldin and Montoya. For a final gimmick, the entire company appears carrying palm-sized balls filled with multi-colored lights. After digging into heavy political themes, Movius sends us home on a high note.