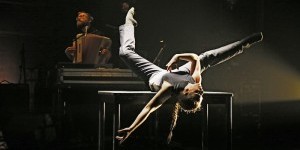 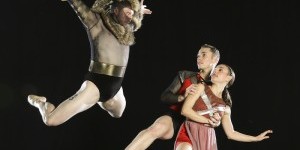 "The Lion, the Witch, and the Wardrobe" Returns to the Stage

The truth is in the title. During Maks and Val: Live Stripped Down at NJPAC, the brothers Chmerkovskiy will do as promised. Yes, that means taking off their shirts, which elicits a Pavlovian roar from the crowd, but they’ll strip down in other ways, too, revealing emotional and mental turmoil brought on by this never-ending pandemic.

Maks and Val have accrued titles and accolades in the Latin division of competitive ballroom dancing, yet they’re most well-known for stints on Dancing with the Stars. (Both have won the coveted mirror ball trophy although Val has bested his big brother by claiming it twice.) That’s exciting for the audience who’s come to know and love them in a digital medium, but it’s a disappointment for me, who’d been hoping for meatier fare than the simplistic razzle-dazzle of dancing made for TV.

The brothers have a charming stage presence, which they’ve been honing since their salad days when they did shows for $25 at the Brighton Beach supper clubs. (Dressed to the nines and beyond, Russian-speaking folks gather to wine, dine, and boogie until the wee hours—even the babushkas.)

In between short dance pieces with Alexis Warr Burton and Jessica Rabone, they tell anecdotes about their life as immigrants from the Ukraine. (Maks had his roller blades stolen on his second day in the US; Val used his funds from performing to purchase wide-legged jeans.) Although they hit snags on the way to fame and fortune, they attribute their success to bumper-sticker slogans: don’t give up, work hard, America is great.

They also address the fallout from COVID, and the dancing brings catharsis in a way that a thousand articles and television segments have not. In one work set to Max Richter’s “On the Nature of Daylight,” the four performers sit in a row of chairs, reaching out, trying to touch someone, anyone. It’s exactly how we all felt in the early days—isolated and starving for human contact.

It’s not all melancholy reminiscences, though. Maks and Val slink through an impassioned duet with Val dressed up as a pint of ice cream as Whitney Houston croons “I Will Always Love You.” For those of us who developed soulful connections with frozen dairy treats, we have never felt so understood. Later, they select a good-natured audience member for a spoof on cleanliness theater and social distancing. While the laughs come thick and fast for that number, a note of terror resounds underneath: the Delta variant continues to pick up speed.

Although Maks and Val are considered top dancers of their respective generations, much of the choreography feels beneath their abilities. Little ballroom dancing appears save the occasional Rumba fan or flicker of Paso Doble figures. Instead, it’s a stream of So You Think You Can Dance contemporary routines—all emotive gestures, frontal presentations, and tight pathways. This flattens the cavernous, three-dimensional stage into something akin to a screen.

The biggest disappointment resides in the anodyne musicality. Every downbeat is acknowledged, each musical arc is acted out, and weight changes often occur in quarter and half note increments. Adding counterpoint or playing with syncopation would not only texturize the choreography, but it would allow the brothers to flout their rhythmical chops. Still, it’s an easy-to-watch 90-minute show that passes by in a blur of feel-good vibes.

Special shoutout to the NJPAC staff, who were beyond gracious as we audience members arrived, dripping and bedraggled, in the middle of a surprise thunderstorm.

Meet Keo Motsepe of "Dancing with the Stars"

IMPRESSIONS: HOLDTIGHT Company's "What Keeps You Going" at the cell theatre

IMPRESSIONS: HOLDTIGHT Company's "What Keeps You Going" at the cell theatre