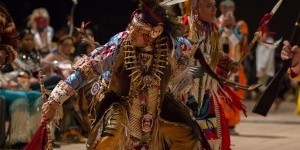 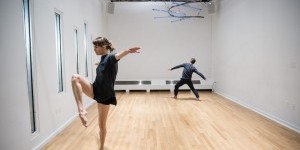 This question spurs Footwork/Technique by Mariaa Randall, which received its US premiere as part of First Nations Dialogues: KIN. Curated by Emily Johnson and presented by Performance Space New York in partnership with BlakDance and American Realness, the work unfolds as two-thirds workshop and one-third traditional concert dance piece.

Unlike in America, where we use the word mob to describe a random assembly of people, it refers, Down Under, to a cohesive collection of people such as one’s extended family.

Randall, who belongs to the Bundjalung and Yaegl people of the Far North Coast of New South Wales, opens the work by gathering us — shoeless — in a loose ring for a yarning circle. Also known as a dialogue circle, this group process within the Aboriginal and Torres Strait Islander cultures fosters respectful conservation of and conversation about heritage. She instructs us to share three facts with partners who rotate counterclockwise around the circle: our name, where we’re from, and, most tellingly, who’s our mob.

In the beginning, the yarning circle feels like a corporate team-building exercise. My first partner and I spend several minutes awkwardly grinning at each other, having exchanged our information in record time. I discover that I don’t have a mob (my answer is anyone who makes me laugh), at least not in the way the Native American, First Nations, and Aboriginal People do. I meet many of them, who hail from tribes throughout the United States, Canada, and Australia.

Progress around the circle is slow with everyone yarning and yarning (among the Aboriginal people, yarning is a verb — to talk). Eventually, Randall organizes us into pairs where we draw pictures of water that has personal meaning. My partner sketches the sharply winding Murray River, which, at 1558 miles, is the longest river in Australia. She explains that, not only is the river essential to her people in regards to trade and travel, it is also the inspiration for stories including one that stars a giant cod.

We develop our water drawings into a footwork sequence. I lap my feet against the floor as my new friend traces curlicues. Around us, people swivel, shuffle, and ripple across the floor. Without stopping our steps, we reach out a hand to a neighbor and then another until we’ve become a duo, a chain, and ultimately a streaming mass — a human version of the Murray River. It’s a powerful moment, everyone moving in accord even as we each move on our own accord. Later, we take strips of black tape and twine them over a pitchforked river that Randall formed prior to our arrival.

The last portion of Footwork/Technique features Randall in a fifteen-minute solo. She sprinkles brightly hued powder into small hills before stamping, flicking, and pressing them into the floor in footwork sequences of the Aboriginal People. Her posture is hunched, her gaze downward. Articulated at the heels, toes, and arches, her feet smudge and strew the powder into a glorious suggestion of a sunset.

At one point, several First Nations individuals join her, hands behind their backs or on their knees. A man assumes a deep, wide-legged pose and stomps. These crack through the air like thunder, startling in their force.

At the end, Randall peels the tape off the floor, our haphazard forks and bends revealed to be a map of our memories. “We’ve created this together,” Randall says. In other words, her mob, your mob, my mob created it.