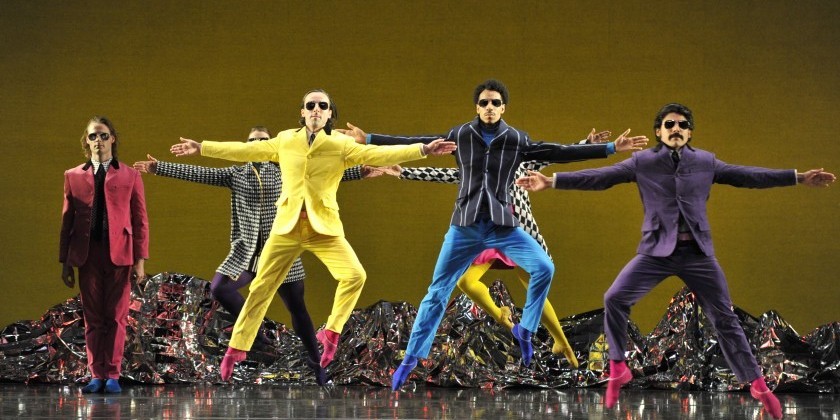 Released in 1967, The Beatles’ Sgt. Pepper’s Lonely Hearts Club Band is lauded as one of the most influential albums of its time, bridging the gap between popular music and high art. Choreographer Mark Morris has achieved similar ends in dance, creating works that are as consumable as they are complex. His Pepperland, commissioned by the city of Liverpool for the album’s 50th anniversary, expounds upon familiar themes and brings new ones to life.

While many musicologists consider Sgt. Pepper the first rock concept album, members of The Beatles have noted its lack of a through-line. Composer Ethan Iverson deconstructs and rearranges five of the album’s original tunes (“Sgt. Pepper’s Lonely Hearts Club Band,” “With a Little Help from My Friends,” “A Day in the Life,” "When I’m Sixty-Four,” plus "Penny Lane" which wasn’t included on the original album). He also adds his own compositions to assemble a more cohesive score for the dance.

Like a psychedelic trip, Pepperland throws us off balance to capture a malleable, non-linear sense of time as repeating moments create a sense of déjà vu. Sometimes, a single dancer reclines at center stage with sunglasses on as the action swirling around him suggests time passing rapidly.

Elizabeth Kurtzman’s snazzy costumes contribute to the mind-bending nature. They produce a satisfying kaleidoscope of pinks, purples, yellows, blues, and reds, peppered with sassy patterns in black and white: tweed, zigzags, and stripes. The scrim is bright yellow, and iridescent rock-like formations line the back of the space.

Iverson’s “Magna Carta” references the album’s artwork, which features the Beatles among a host of historical characters. The dancers run up, one at a time, as their characters are introduced (“Shirley Temple! Oscar Wilde! Marilyn Monroe! Fred Astaire!”). The theme of a band within a band is a unifying concept of the album, and Morris and Iverson play with this self-referential idea. The dancers assume abstract personas throughout, donning sunglasses to represent a new character.

Morris portrays the theme of a “Lonely Hearts Club” in iterations of coupling off versus aloneness. Dancers prance in pairs, and many moments highlight a soloist against the group. There are cute little character vignettes, like when Nicole Sabella rushes in, waving hello to another dancer, who, to her chagrin, waves goodbye and exits.

The choreography is drunken precision, where dancers whirl and stumble, but are always perfectly on beat. Certain gestures repeat throughout — an extending of a palm, like an offering, and a covering of the eyes, as if to reject all the visual stimuli. Pepperland is a controlled, metered explosion that harnesses excitement and spontaneity. Yet it satisfies our inherent desire for order. When dancers catapult into space, the disruption to the formation always resolves.

Album themes also surface in Morris’s choreography. Sgt. Pepper juxtaposes nostalgia for a Liverpudlian childhood, conveyed in tunes like “When I’m 64,” with the brave new world of psychedelic drugs described in trippy numbers like “Lucy In the Sky With Diamonds.” The concept comes full circle in the idea that these mind-altering substances can recreate childlike curiosity and excitement. At the apex of Pepperland, two dancers hoist a third into the air, her arms extended behind her like airplane wings. The entire cast, awed, follows her around the stage, vividly capturing a pure joy that soars out of the banality of day-to-day existence.

Like the album,Pepperland takes us on a long, abstract journey that ends near where it begins, with the cast in a circle at center, enclosing two women, who sway together lazily. As though emerging from the haze of a psychedelic experience, we wake up right back where we started. Only an hour has passed.