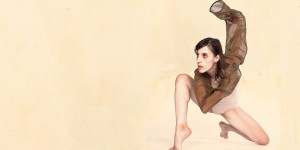 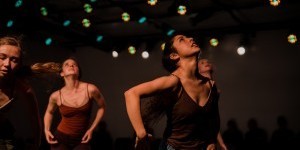 Day in the Life of Dance: Circle Return at CPR

A woman with a melodic British accent ushers us into the waiting room of a secret holding laboratory. Protective gear must be worn at all times. We must stay with the facilitator. Absolutely no talking. Do not touch anything.

We file in and place our belongings in cubbies to our left. To our right, we see plastic drums containing white paper jumpsuits akin to the thin-but-resilient fabric of hospital-shoe coverings. Puzzled, we put on the gear, and place our feet in a large box, as instructed. When we withdraw our feet, elasticized plastic booties encase our shoes. A video screen at the far right side of room shows images of an adjacent chamber with  what appears to be a living creature lying prone in a bubble. As we watch, a recording of the instructions we heard outside play on a loop and are projected on a screen in multiple languages. The atmosphere is serious and sterile, yet eerily cheerful.

We learn that the creature held captive in this secret cryogenic facility was named Eve by her creator, Dr. Red. She is the first humanoid to be bioengineered with reanimated alien DNA, discovered in the mouth of the underworld. Naked, except for flesh-colored fabric wound around her chest and torso, Eve has patches stuck to her legs where IV tubes can be inserted. There are red suction-like marks on her hands and upper arms. Her hair, a long tangle of silver-grey dreadlocks, resembles Medusa. Ambient electronic music plays, and green lasers pulse over the her clear encasing while scientists in yellow suits and goggles study her.

As we circle the enclosure with our facilitators, Eve starts to subtly shift, waking up. Her head rolls to one side and her hand reaches out slowly — delicate and cautious. As she notices us she recoils, her eyes wide with fear.

Another doctor called X wheels a video monitor up to Eve, so she can look at images of cells dividing pictures of burning planets and geometric patterns in the sky. Dr. X makes notes on his clipboard, and Eve grows agitated, her eyes frantic. The air in the make-shift laboratory becomes fraught with expectation and uneasiness. Staring at a living creature who is unable to protest feels voyeuristic and wrong.

In the silence where we watch and are being watched, prohibited from communicating with one another, each visitor to the “lab” undergoes a solitary experience.  Our experience mirrors the isolation and lack of volition inherent in Eve’s. We  are forced to confront our beliefs and predjudices: thoughts about animal testing, cloning, and whether or not it’s right to suppress the freedoms of other living beings for scientific or societal advancement. Will our quest for progress and control ruin or uplift our species?

Toward the end of my group’s visit, which happened to be the first tour of the installation, Dr. Red carefully approaches the entrance to Eve’s bubble. She slowly unzips the flap to the antechamber and steps cautiously inside. As the facilitators usher us out, we see Dr. Red and Eve slowly drawing closer, a thin layer of plastic between them. The scientist crouches and meets Eve at eye level, a sense of awe, distrust, and curiosity coursing like electric currents between them. As we remove our jumpsuits and prepare to return to the real world, curiosity lingers like an itch. Will Eve be the key to humanity’s evolution, or its undoing?

Visitations to Circle occurred in thirty-minute time slots, four times an evening, over a period of three days. As one group of visitors filed out, another group entered. The action inside the holding lab continued, and observers were not privy to what activities took place before they entered or after they left.