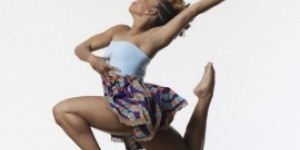 Dance and radio: on the surface, these two mediums could not be more different. Dance relies on the visual, and radio on sound. This, at least, is the premise of Three Acts, Two Dancers, One Radio Host – an unlikely meeting of disparate art forms. But of course, dance can produce all kinds of sound, and radio can be very visual, though it usually relies on the individual minds of listeners to provide that visualization. Three Acts, while providing an exhilarating experience for its audience, only scratches the surface of this potential interplay between art forms.

Ira Glass, host of the popular public radio program This American Life, was thoroughly taken with Monica Bill Barnes & Company after seeing them perform. He is, in fact, no stranger to the stage, as This American Life has done a number of live shows over the years. Glass began inviting choreographer Monica Bill Barnes and her frequent collaborator Anna Bass to have a hand in these live shows, and Three Acts was eventually born. The show toured the country this year, culminating in a three-night run at the Town Hall.

The theater was packed, and clearly, most of the audience members came to see Glass. They responded most enthusiastically to his segments, laughing raucously and frequently bursting into applause at his witticisms. Three Acts is designed for his audience – in structure, it is much like an episode of This American Life, and it is something of a retrospective of the program, using clips from the very first episode and others from throughout its nearly 20-year run. These radio stories are expertly chosen. They range from hilarious (a Riverdance performer's story of the touring cast's attempt to win the lottery), to oddly endearing (an ad man's story of learning to please his most important "customer" – his wife), to poignant (poet Donald Hall's telling of the last days of his wife's life). But these stories, and Glass's adept presentation of them, are the centerpiece of the show. Stellar performers Monica Bill Barnes and Anna Bass are too often relegated to a supporting role.

This is not to say that Bass and Barnes are upstaged by Glass. When the two dancers are on stage, frequently moving in unison, it is difficult to decide whom to watch. They are both utterly engaging, every movement and facial expression precise and perfectly timed. Their dances, sometimes inserted between Glass's stories and other times occurring simultaneously, are imbued with subtle, clever humor, as well as delightful slapstick comedy.

Glass interviewed both Barnes and Bass for the show, and these interviews form the soundtrack to some of their segments. In one particularly amusing section, Bass is heard talking about the playful competition she and Barnes share onstage. According to her, their performances are a constant game of one-uppery. This commentary, of course, invites the audience to watch for such a game between Bass and Barnes. But from the outside, the most striking aspect of their performance is how incredibly attuned they are to one another. They dance together the way only two people who have such an intimate creative relationship can.

Barnes and Bass showcase an impressive range over the course of the evening. At times, they are smiling showgirls sporting sparkling dresses. In another dance they appear in suits, punching and swaggering to a Dean Martin song about Las Vegas. And in the show's most poignant moment, they trade in their athletic physicality for powerful subtlety. To Donald Hall’s poem about his wife's last days, they dance atop a small, black table, dressed in long trench coats. The dance consists mostly of small shifts of weight, but conveys an overwhelming tenderness and sense of loss.

Three Acts provides a highly pleasurable and entertaining experience, but it falls short of truly integrating dance and radio. However, it does seem to have introduced a new audience – the fans of This American Life – to dance, and that we can happily accept. Maybe next time there will be more dancing.