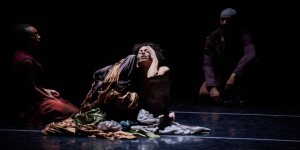 On the occasion of Merce Cunningham’s 100th birthday on April 16, the Merce Cunningham Trust threw a tremendous birthday bash honoring the choreographer in three cities: London, Los Angeles and New York. Cunningham, who passed away ten years ago, would have approved: He liked big events and, restlessly creative, sought throughout his life to keep breaking new ground.

In each city, 25 dancers were slated to perform 100 solos taken from, or adapted from, Cunningham’s oeuvre, though at BAM, the numberswelled to 26 with the addition of an understudy. Most of the dancers had never worked with Cunningham. But they had all been carefully coached by dancers who had.

The evening was structured as an Event, Cunningham’s term for performances consisting of a collage of sequences from his repertoire. His definition of an Event was included in the program notes: “Presented without intermission, Events consist of excerpts of dances from the repertory and new sequences arranged for the particular performance and place, with the possibility of several separate activities happening at the same time.” The 100 solos, then, were not literally “solos,” but movement monologues that dancers performed in the company of other dancers, each in their own space, cycling on and off the stage to give the appearance of a single unified work.

The curtain opens on two men and a woman dressed in body-skimming costumes in shades of sherbet orange. They move with slow fluidity against a semi-abstract black-and-white set projection that suggests a pen-and-ink drawing of a waterfall. The scene is tranquil, as is the music: a soprano voice singing wordless notes punctuated by the sounds of a bass saxophone. The stage world suggests one of Cunningham’s nature studies. It’s easy to imagine the dancers as birds existing in a peaceable kingdom.

A fourth dancer enters to break up the slow-moving peace with a skittering dance of small jumps that become increasingly large as he exits offstage. Other dancers enter and exit, and the stage world breaks up like a shifting kaleidoscope image, no longer a natural world but bodies in abstract motion.

Indeed, as the evening unfolds, Cunningham as nature poet gives way to Cunningham as urban poet. The soundscape steadily spills over into cacophony, with layers of electronic sound and buzzing nearly drowning out the saxophone. Almost imperceptibly, the backdrop of projections has been shifting and the waterfall has given way to a wall of bricks from which paint seems to drip. The dancers enter as a group, freeze-framing in the casual movements of a crowd, reminding us that Cunningham was as inspired by the street scenes on the sidewalk below his Manhattan apartment as by the wilderness.

But there is nothing remotely pedestrian about his choreographic style. It requires extreme physical control, as Cunningham almost fetishizes the moving body, celebrating its beauty much as classical sculptures do. Most of the performers here are dressed in unitards, revealing all the lines of their bodies. Line and shape are all-important—no matter how fast the tempo, the shape must hold. This, along with the special use of weight—more grounded than ballet but less grounded than in the work of classic moderns like José Limón—may be among the hardest elements of Cunningham style to master.

Moments of humor surface, too: In one passage, a man weaves among other dancers hopping on one leg, the other sculpted into a beautiful low front attitude—a single-step solo. The episode has a silly whimsy while also evoking the movements of a wild creature afraid to alight anywhere too long. Elsewhere, a man (Keith Sabado) rides a bike in figure eights around the stage and a woman (Lindsey Jones) does a little march with picky turned-in and turned-out legwork while holding a large black umbrella over her head. Another man (Jason Collins) enters wearing leggings covered by aluminum cans. The cans clink and clank as he moves, and then they fan out like strands of hair as he exits in a chain of barreling turns.

In many ways, the choreography is the star at a Cunningham performance, as the nonpresentational style privileges the dance over the dancers. And yet, certain performers stood out. Sara Mearns, the New York City Ballet principal who was tackling Cunningham for the first time, offered an incandescent performance. Her movements were at once supple and laser-focused, and always enormously scaled.

Other standout performers included Peiju Chien-Pott, a principal dancer with the Martha Graham Dance Company who was a model of lissome grace; Forrest Hersey, who stood out for his fast, athletic jumps; and Tamisha Guy, powerful and precise in long skeins of steps.

The evening offered a welcome chance to see Cunningham’s sublime choreography in New York once again. The last time Cunningham was presented at BAM was 2011, during one of the final performances of the company’s farewell tour. What the evening didn’t provide, however, was an opportunity to see a complete Cunningham work. That’s because there is no longer a permanent troupe to keep the works alive. Presenting a compilation of solos sidestepped this problem, as the participating dancers could rehearse on their own.

A program note says that the Merce Cunningham Trust and the three theaters presenting the program “hope to demonstrate that the Cunningham legacy is alive and well and that his work can be performed by a diverse group of dancers.” This performance proved the second point but not the first. The Cunningham legacy is alive and well only in France, where his works are still performed regularly by professional companies. The decision to shut down the Merce Cunningham Dance Company was heartbreaking for dance fans who love his work, and Night of 100 Solos, for all its pleasures, only highlighted the dance world’s loss.