Visits by Pacific Northwest Ballet to New York are always most welcome – and not to be taken for granted, given how rarely the major American ballet companies manage to arrange a New York season.

Fortunately, since Peter Boal became artistic director in 2005, PNB has managed  four New York tours.They appeared at the Joyce in 2010 and 2014, and this was their second visit to City Center, the previous one being exactly three years ago.

The two mixed bills (each performed twice, with some cast changes) were fascinating and well-chosen to display the company's range. The first offered an ideally balanced Balanchine program, and the second showcased three contemporary works, two of them New York premieres. All but one of the six works were accompanied by PNB's exemplary orchestra, with conducting duties shared by Music Director Emil de Cou and Allan Dameron.

The Balanchine program spanned nearly 50 years of his choreography in three wonderfully contrasting masterworks. The company, which has had an extensive Balanchinean pedigree for decades, danced these ballets with the authority and naturalness that comes with experience. 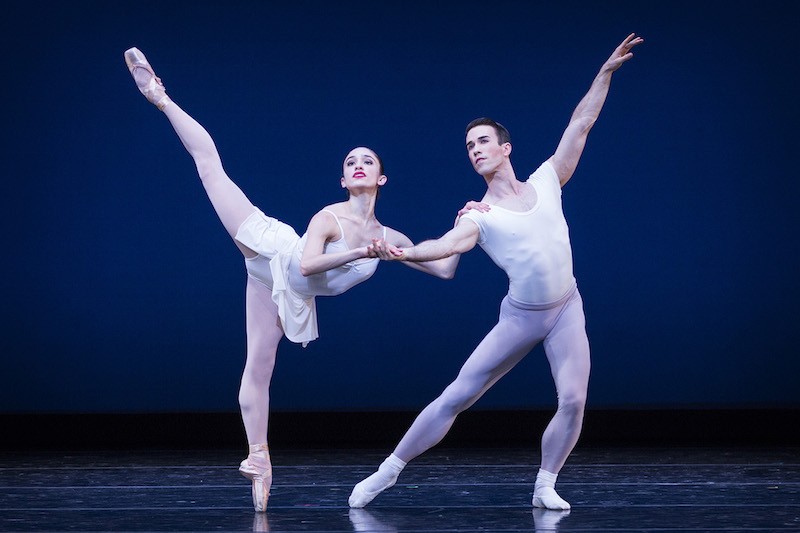 In Square Dance (1957), staged by Boal, Leta Biasucci and Benjamin Griffiths gained in confidence and ease as the demanding work progressed. Their fixed smiles at the outset suggested tension, but they came into their own in the adagio, which was taken at a notably slow tempo. This allowed for some especially gorgeous arcing lifts – a sequence of three in each direction – to register powerfully, and suggested a kinship with the celebrated slow movement of Concerto Barocco.

Shifting into the crisp allegro exchanges that follow, Biasucci and Griffiths displayed a playful rapport and musical attack. Biasucci, who made her debut in the role on the season's first night, didn't quite devour space in the bravura passages to the extent that some ballerinas have, but she met the technical demands with sparkling vigor. Griffiths performed the restrained, resonant adagio solo with scrupulous focus, but did not make it into the seamless, almost meditative soliloquy that it can be (and was in Boal's memorable interpretation).The six couples of the ensemble met their considerable demands with bracing energy and confidence.

Boal also staged Prodigal Son (1929) – a New York City Ballet repertory mainstay since the company's years in residence at City Center, and one in which he, in the title role, was originally coached by Jerome Robbins thirty years ago. This PNB production had aspects both familiar and novel. The earthy roughness of the Drinking Companions and the two Friends (whom NYCB programs identify as “servants to the Prodigal Son”) was particularly exciting. While the costumes for the Prodigal (James Moore) and Siren (Lesley Rausch) were basically the same as NYCB's, these men's costumes resembled burlap and the men attacked the boisterous movement with a rough-hewn aggressiveness. The Friends, whose duet resonated with a delicious crudeness and aggression, were clearly destined to join up with the Companions, sharing their grasping vulgarity.

Their betrayal, and Rausch's implacable, all-business entwining of the Prodigal, made Moore's feistily naive Prodigal a surefire victim – no match for their machinations. Palpably eager to escape in the opening scene, and wondrously entranced by the exciting new vistas he discovered at the start of the second, his humbling downfall and abandonment became all the more poignant. In the final scene, he conveyed less physical devastation and more of a searing emotional need to return to the nurturing comforts of home. 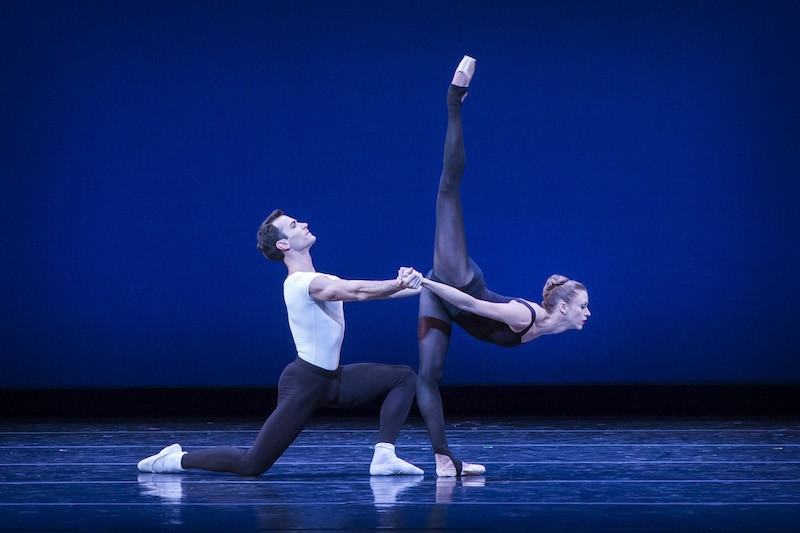 Stravinsky Violin Concerto (1972), staged by Paul Boos and Colleen Neary, benefited from a wonderfully vigorous and bracing musical performance, conducted by De Cou and featuring violinist Michael Jinsoo Lim. All four dancers in the lead roles were new to the ballet for these New York performances, and already conveyed a great deal of this late Balanchine masterpiece's kinship to his earlier “leotard ballets” as well as its rambunctious spirit of folk energy and warm conviviality.

Rausch's long lines and strength were ideally showcased in the Aria I duet; she and Jerome Tisserand adeptly explored its odd, sometimes acrobatic shapes and exchanges of power. Noelani Pantastico did not bring the vulnerability to Aria II that can heighten the poignancy of this tender and intimate duet, but she and Seth Orza already delivered persuasive performances.

“Contemporary Innovators” was the title given for the second program in the season's advance material. The three works were created within the past two decades, and added to the PNB repertory within the past five years.

The most familiar of the trio was also by the best-known of the choreographers: The Vertiginous Thrill of Exactitude, William Forsythe's 1996 display of virtuosic brio set to the 'Allegro molto vivace" from Schubert's Symphony No. 9. A longtime mainstay of San Francisco Ballet's repertory – they've performed it in New York several times – it seems to be sui generis within Forsythe's body of work in its straightforward presentation and choice of 19th-century score.

Dense and overly busy, with what seems like an excess of bravura packed into its brief duration, with the right dancers The Vertiginous Thrill… comes across as a celebration of technical virtuosity. PNB, which acquired the ballet last year, fielded a fine cast that ably met its challenges of speed and technical complexity. Angelica Generosa's joyful abandon was particularly notable, while Margaret Mullin and Elizabeth Murphy each made strong impressions in their solos. Griffiths and Jonathan Poretta, the nicely matched male duo, looked a bit effortful at times, but sustained a vigorous attack. 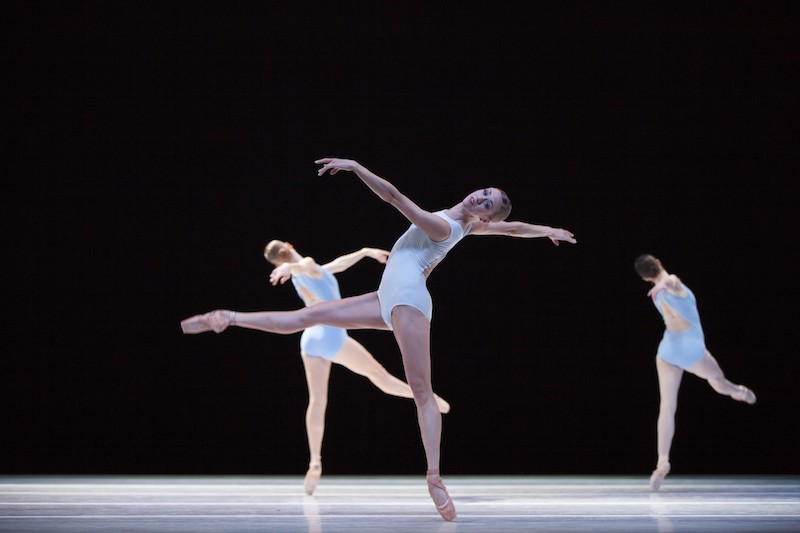 The program didn't exactly open with a bold contemporary statement. A Million Kisses to my Skin, a 2000 work by the British choreographer David Dawson, set to Bach's Keyboard Concerto (Dameron doubled as conductor and pianist), is a respectable, scrupulous, at times invigorating work that showcased the dancers' clean lines and crisp attack. Dawson has had a busy European career (this work was created for Dutch National Ballet, and entered PNB's repertory in 2012), and at times this ballet reminded me of Glen Tetley's Voluntaries (without the angst) – particularly when a crucifix-like lift familiar from that ballet occurred several times in the central slow movement, a succession of efficient but inexpressive duets for three couples.

The dancers wore simple but attractive unitards (tights for the men) in shades of white and pale blue, and the whole ballet had a streamlined but hardly cutting-edge look. It was welcome not to see the kind of hectic, twisty, embattled male-female connections  that mark so much “contemporary” choreography.

And the work allows the dancers' individuality to emerge, since it has no ensemble, but nine featured roles (here shared by ten dancers, since the indisposed Laura Tisserand's role was split between Sarah Pasch and Kylee Kitchens). Angelica Generosa took over for Elle Macy, and the playful phrasing and bold energy of her solo was a highlight of the third movement. 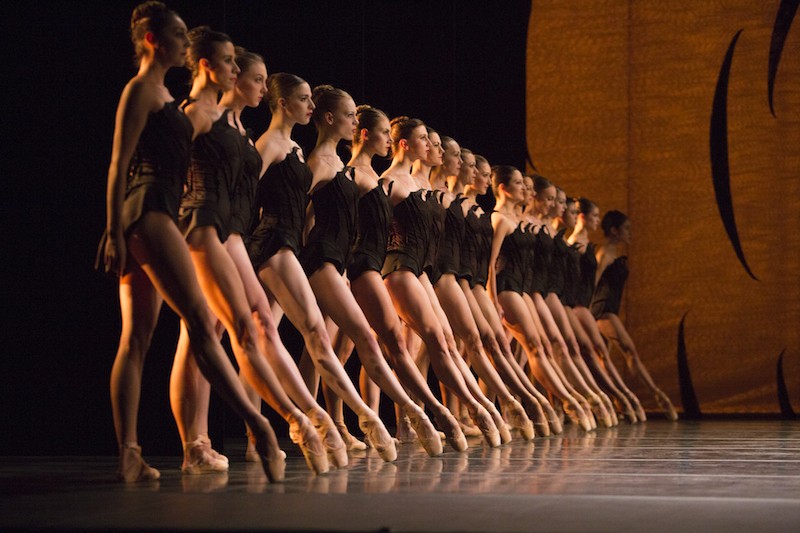 Both Dawson and Crystal Pite – whose Emergence closed the program – are former members of Forsythe's Ballet Frankfurt. The last time a Pite work was seen on the City Center stage, she presented a surging mass of 60 dancers, forming fluidly evolving shapes, as part of the Thomas Ades program last fall. Emergence is also a highly eye-catching and distinctive work. Opening with a couple on a nearly-dark stage, whose barely identifiable splayed limbs evoke insect movement, it opens out to present over three dozen black-clad dancers, with sheer black masks hiding their faces, in separate male and female battalions, suggesting a nightmarish insect society asserting its power.

Jay Gower Taylor's backdrop resembled a diabolical web; in its center was an opening through which dancers emerged and retreated. Owen Belton's electronic score provided a suitably uneasy aural environment. Pite's skill at conjuring resonant and striking stage pictures is evident and the audience was suitably wowed. But what lingers afterwards is more a recollection of impressive imagery, rather than distinctive and evocative movement phrases.