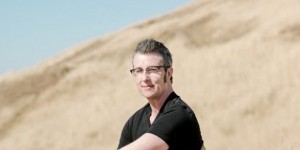 At first, there’s just a tiny sphere of light at center stage. Then, a flicker of fingertips dances across ivory keys. As a gentle aura infiltrates the stage, virtuosa pianist Simone Dinnerstein materializes at a grand piano. Six dancers, evenly spaced and fanning out toward the backstage left wing, stand in stillness, intently listening to the opening of Johann Sebastian Bach’s “Goldberg Variations.” This moment and others in New Work for Goldberg Variations, which was presented by the Joyce Theater, show how choreographer Pam Tanowitz intertwines music and dance into a dynamic conversation.

Dinnerstein is situated at center stage, an obstacle the dancers must circle around, brush past, and even move through. During the piece, the music, musician, and piano feel as alive and present as the dancers.  At times the dance mimics the music, or counters it, and, sometimes, as in the opening, the dancers stand quietly and let the music speak.

The tone is formal and somewhat impersonal. Rarely do the dancers acknowledge the audience, and their facial expressions seldom betray emotion. Rather, the articulation of their bodies causes the work to emote. Tanowitz adds quirky twists to a vocabulary largely inspired by the Cunningham technique — the movement requires strength, balance, and coordination between the torso and the limbs. Stillness contrasts with moments of flight, the dancers rhythmically locomoting with a step-ball-change, a plié shuffle, or a parallel bourrée.

The vibrant cast features performers from other world-class companies like Doug Varone and Dancers, Mark Morris Dance Group, and the Merce Cunningham Dance Company. While many of the movement motifs repeat, each dancer is highlighted in solos and duets, which captures their individual qualities.

Maile Okamura’s dancing exudes serenity. She moves with the lightness of a flower petal blowing in a spring breeze. In a duet with Jason Collins, their buoyancy makes us sit taller in our seats. The dynamism and intentionality of Netta Yerushalmy’s movement consistently catch our eye. Lindsay Jones is crisp and deadpan, her long limbs cleaving clear lines across the space. Christine Flores is spotlighted in powerhouse jumping phrases and astonishing balances. (A program note states that Victor Lozano could not perform in this show, though his absence is not apparent.)

At first, the cast’s attitude toward Dinnerstein is polite but distant. Dancers use the piano as a physical tool, such as when Okamura holds it like a barre during a solo bathed in red light. Slowly, the engagement increases, culminating when Jones sits on the piano bench alongside Dinnerstein. She paddles her feet to mimic the rapid movement of the pianist’s fingers. Eventually all six dancers gather around to watch her play.

It’s hard to pinpoint exactly when, but the dancers change costumes. Some remove their flowing shirt and pants and don a similarly styled one-piece while others simply take off their pants to reveal bare legs. The choice is subtle and reengages our attention to these mysterious details.

Simone Dinnerstein and Jason Collins in New Work for Goldberg Variations at The Joyce Theater; Photo by Erin Baiano

Tanowitz points out intricacies in the music by giving them life with her choreography. Dancers flying across stage in lofty chassé turns accentuate the music’s lightness. A solo by Melissa Toogood — she drags herself across the stage in big, heavy steps, her arms swinging like pendulums — exaggerates the weightiness of a particular movement.

New Work asks us to consider how dance can impact music and vice versa. After watching the piece, it’s difficult to imagine listening to “Goldberg Variations” without the dimension and commentary of Tanowitz’s choreography.