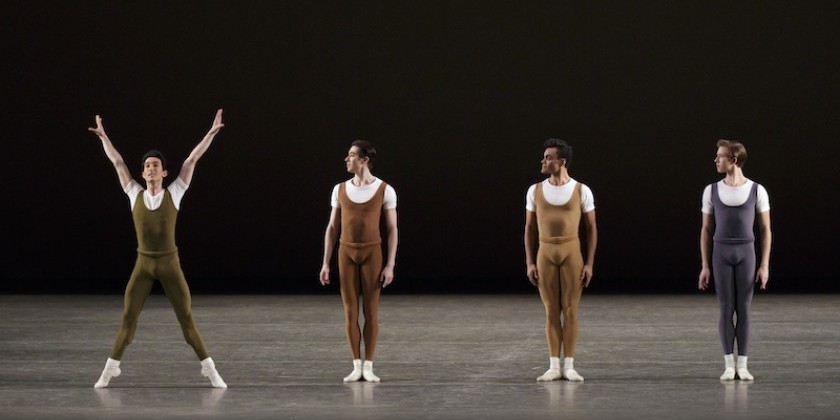 Six programs of 20 ballets in three weeks made up the recent festival in honor of Jerome Robbins at New York City Ballet. Robbins, a giant in the dance world, would have turned 100 years old later this year, but passed twenty years ago shortly before his 80th birthday.

The first program I was able to catch opened with The Goldberg Variations, from 1971 — certainly a fitting introduction to the legacy of Robbins and the history of ballet, which traces its roots to the court of Louis XIV. Even if the Sun King slightly precedes composer Bach, the idea of baroque court dances as the cradle for a new art form could not be more pleasantly evoked.

New York City Ballet in Something to Dance About during Robbins 100; Photo: Erin Baiano

Pianist Susan Walters takes on Bach's score. A dancing couple (Miriam Miller and Aaron Sanz) clad in baroque dance costumes with heeled shoes introduces the Theme. The rest of the ballet is divided into two parts: one of youthful innocence, and the other portraying mature relationships. It amounts to more than 80 minutes of wonderment, introspection, exuberance, community, and interpersonal relationships.

In the first part, dancers in class attire explore the space in constantly changing numbers and configurations. After two trios, a lone male dancer's lyrical quality (Taylor Stanley) is juxtaposed against an octet. One lady gets to dance with six young gentlemen; and fleet-footed Anthony Huxley leads a flock of five fellow dancers. Thoroughly structured sections alternate with informal ones in which individuals who stroll as if in a park are brought together as a community by seemingly random unison. A sextet grows into a double sextet. Then a boy comes into view dancing by himself. He, in turn, sees a girl enter the space; they witness another girl; and all of them are fascinated when another boy arrives. Each one recognizes the others as individuals. Looking at each other with interest, each young person brings movement of their own eventually joining the others to dance as a group and as couples.

However intimate the partnering of Daniel Applebaum and Joseph Gordon might seem if they were alone onstage, they get to touch and support each other innocently while the young ladies watch them become friends. Knowing they all get along, the quartet continues in heterosexual pairings before the ladies get to have time affirming their friendship by supporting, mirroring and shadowing each other. Emilie Gerrity and Lauren Lovette both perform delightfully throughout and give their dancing dynamic nuance.

Shirts and dresses in part two add weight and flow to the movement of the featured senior principals. Three pas de deux introduce various relationships. Overhead lifts announce that it is time for these characters to trust one another and be adults. Sterling Hyltin and Jared Angle navigate through an awkward, acrobatic, and at times more-silly-than-funny alliance.

Sara Mearns and Tyler Angle vividly portray a complicated connection in which she seems emotionally detached focusing on the dreamy extensions of her limbs. He partners her ardently and she asserts her independence in unsupported spins. When the partnering eventually becomes truly engaged and committed and one thinks they have resolved their differences, she decides to walk out. His ensuing solo affirms there is a life to be enjoyed after having had a lover with intimacy issues.

Ashley Bouder and Andrew Veyette grapple with loss and give each other comfort. If their relationship seems less complex than the previous one, it gives me the time to ponder how Robbins miraculously manages to depict emotional states through the timing and dynamic of his movements. A slight tilt of the head, and a hesitation before taking a next step or touching a partner allow for a kaleidoscope of human experience. The choreographer’s delicate choices and the artistry of the dancers who interpret them, create an atmosphere and an implied storyline. Somehow the formality and structure of Bach's score give these dances life and the freedom to be and breathe.

At the end, the group of dancers faces the piano and acknowledges the masterful work of the composer and the heroic efforts of the pianist. One couple dressed in practice clothes appears and takes center stage. Flanked by six dancers on each side, the man sinks slowly to his knee as the rest of the dancers retreat into the wings. Music and dance are done. Long live the music and the dance!

The Goldberg Variations was paired with Robbins' version of Les Noces set to the fantastic Stravinsky score, conducted by music director Andrew Litton, with its unusual orchestration that includes a choir, four pianos, and percussion, making the evening a deeply satisfying event.

For a review of the Robbins Gala by my colleague Erin Bomboy, please click here. For my composite review of the remaining festival programs, check back in a few days.