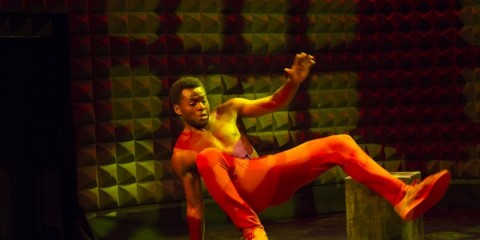 DANCE NOW at Joe's Pub is a delightful tasting menu for dance. In its 23rd season, the festival requires choreographers to take on its challenge: Create a five-minute piece that fits on the Pub's tiny stage and that’s a “clear and complete artistic statement.”

Participants vie for a $1,500 stipend and a residency in Pennsylvania, but the atmosphere is hardly competitive. The boisterous audience laughs, gasps and murmurs its approval during each piece. The program is, by and large, effective, as each artist conjures a distinct onstage world.

Claire Porter opens with a ruminative solo, Lipstick. She reads the names of lipstick colors, each time modulating her voice from amused to puzzled to disdainful, only to chose another color. Eventually, the believable, albeit silly, names are replaced by political barbs (Agent Orange, for example). Finally, Porter chooses a bright red lipstick and slowly draws a line across and around her face as the lights fade. With few words and fewer gestures, Porter plays with the perceived superficiality of “women's interests,” the absurdity of our current political climate, and the sense of powerlessness that can accompany femininity.

She's followed by LAJAMARTIN, the new company of Laja Field and Martin Durov, who perform an excerpt from Unearthed. These phenomenal movers dive across the stage, climb each other's bodies, and fly through the air. They're founding members of Shannon Gillen's VimVigor, so aesthetic similarities arise. As this duo works on finding a unique voice, they might evaluate using their hyper-physical movement for a narrative beyond a combative romantic relationship.

Marion Spencer's excerpt from Rosalie appears to be a continuation from her early-2018 performance as part of Gibney Dance's WorkUp series. Her lovely singing voice and dreamy blue lighting establish an otherworldly atmosphere, but the intimacy of Joe's Pub favors audience-oriented dances, making this not quite the right excerpt for the DANCE NOW format. It's slow to start and then suddenly revs up as Spencer whips around the stage like a tornado. She, however, remains introspective.

Jamal Jackson, director of Jamal Jackson Dance Company, offers a rhythmic solo set to the story of young African boy who runs from instances of abuse or forced labor. In Norman, the storyteller in the recording isn't Norman himself, but an adult woman who knew him. Jackson's bound, staccato movements, repetition, and intense focus honor the resilience necessary for survival.

He's followed by Riley Watts, also with a solo. In Zauberer, which means “wizard” in German, Watts coils and contorts seamlessly around himself. His control is more awe-inspiring than any magic spell, but Zauberer is a little cold. Watts dances so effortlessly that it looks tossed-off. It would be exciting to see such an accomplished artist reveal more vulnerability.

When the light comes up on the Rock Dance Collective performers in Cleo Mack's Exhibit, all the audience sees are quivering earth-toned blobs, the dancers' bulbous costumes purposely obscuring their torsos. Though this quasi Broadway jazz number in heels is a charming break, it's also the least coherent dance of the evening. Committed and entertaining, the performers dash around to Julie Andrews' rendition of “I Feel Pretty.” But if there's a joke beyond the poor-taste implication that awkward bodies can't be pretty, it's not obvious.

In Steps and Stages, Christal Brown, director of Christal Brown/INSPIRIT, performs a solo that breaks the fourth wall. She talks, most memorably, about how choreographers are always making “pieces,” but never a whole, and at this point in her life, she's ready to invest in that whole. Unfortunately, Brown talks more than she dances, and it feels over-rehearsed, especially unfolding against her rippling gestures and footwork. Her work is a literal artistic statement, but she might consider making the audience work a little harder.

In the only tap number of the evening, Subject: Matter dance company performs Ian Berg's We Fear for Your Life. The dancers have swag and technical flair, and their army-green costumes evoke the entertainers of World War II. The music is Bert the Turtle's treacly “Duck and Cover,” a 1951 PSA song that taught children about violent attacks. We Fear for Your Life takes a modern turn, though, when one dancer starts to grimace instead of grin, and stomps far more aggressively than his fellow performers. Eventually, he seems to crack under the pressure of keeping up appearances.

Tsiambwom M. Akuchu's Every Man (Alright) opens with Akuchu standing on a block, facing the audience. It's an unsettling image that suggests both an auctioneer’s block and a winner's pedestal. Every Man is tense, and Akuchu uses both stillness and explosive movement to equally powerful effect.

The last piece of the evening, dendy/donovan projects' excerpt from Made in America is the least successful. The central clown figure, Stephen Donovan, talks about American exceptionalism and colonialism in a muffled, difficult-to-understand voice. Dressed in red, white and blue costumes, three other dancers, all people of color, noodle around the stage without direction. It's unlikely that dendy/donovan projects meant to reinforce racial power dynamics. But it's not a great look to position an active, purposeful central character against non-white performers who lack a clear role onstage.

The Dance Enthusiast Shares IMPRESSIONS/ our brand of review and Creates Conversation.
For more IMPRESSIONS, click here. For Part One of Joe's Pub, click here.
Share your #AudienceReview of performances for a chance to win a prize.

MOVING PEOPLE: Deborah Lohse on the Energy of a Room, Doug Elkins' "Fraulein Maria," and the Time a Drag Show Transformed her Life — Plus, a Special Appearance by TruDee