Impressions of The People Movers’ < /CL!CK >

< /CL!CK > examines the vastness of the Internet and the boisterous characters who populate its virtual space with a humorous, sexy sheen. A quintet of young, trim performers dressed in white — think minimalism meets the Gap — enters the stark gallery space where two adjacent screens frame the room. These screens feature the imaginings of designer Pierre DePaz. Projections of Internet browsers, static, moving stick figures, and controversial (real) tweets flit in and out as the dancers pull cartoonish faces behind the screens. They’re real-life emoticons.

The next 50 minutes surge with affecting vignettes: the perils of dating à la Tinder, a gaggle of desperate attention seekers, and self-promotion on a tricky digital terrain. 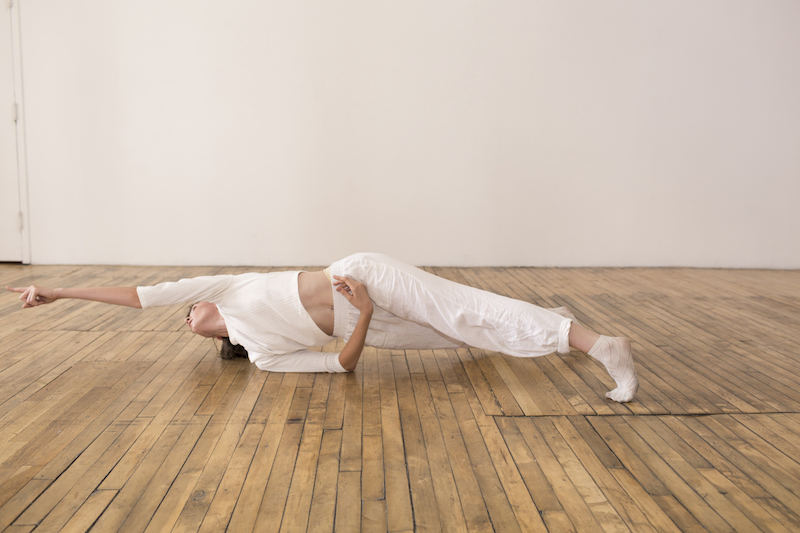 The magnetic performers are not afraid to poke fun at themselves or their peers. In fact, they do so with glee. Shannon Spicer booms, “I’m queen of the universe.” Her eyes — big, expressive, and maniacal — entrance us. Deftly cutting and swirling the air with her equine limbs, Spicer waxes poetic on her awesomeness. Matthew Ortner delivers a tongue-in-cheek song with a pitch-perfect maudlin delivery. “I’m so lonely/No one takes me seriously,” he cracks. Michael Abbatielo, the Costello to Ortner’s Abbott, chimes in to create an absurd and off-key duet. A running joke about “God damn Vicky and her fucking gluten allergy” fills awkward silences. These bits elicit laughs, but after awhile the relentless antics wear on you. 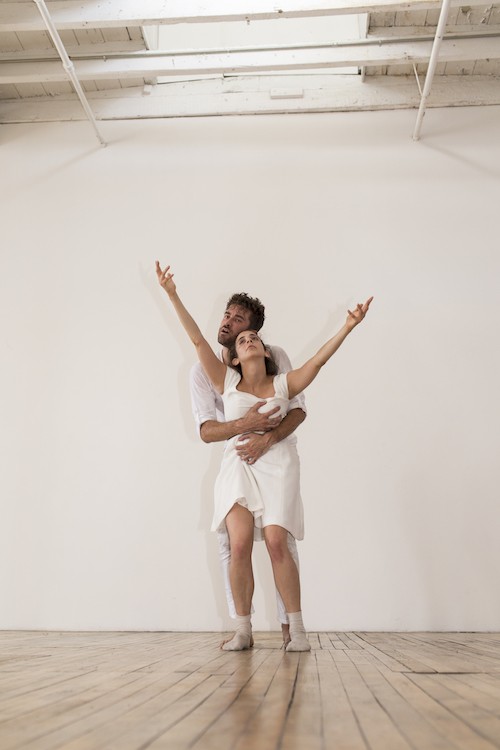 A duet performed by Ayla Weisz and Brian Castillo steers < /CL!CK > in a much-needed new direction. They two are forced into coupledom by Abbatielo and Spicer who physically manipulate their two bodies into off-kilter configurations like puzzle pieces that are jammed together but don’t quite fit. Rapidly, Weisz and Castillo collide with increased sexual frenzy as her breasts are thrust into Castillo’s face and he slaps Weisz’s ass with such force you can feel the sting yourself. Ladenheim doesn’t shy away from depicting the dark underbelly of the Internet’s effect on millennial dating culture. The scene provokes feelings of disgust and arouses us from our swipe/click/like stupor.

Ladenheim and her fellow artists deserve praise for their nuanced performance and production design. They present a world we know well, a place we rely on yet lambast as a distraction and dumping ground for the disgruntled. We nod our heads during heated exchanges and gaffes that normally appear on our screens, but here are presented in the flesh. In this iteration, we can’t unfollow or exit out.