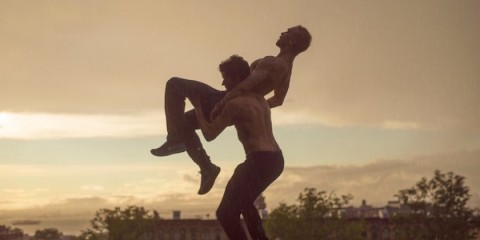 She sings to you sweetly, promising to satisfy your greatest desire. At first, this desire flickers faintly, a lone flame in your abdomen. Later, it ignites into a full-body fire that scorches rational thought into ash. No matter how strong your will is, how clever your wit, you can't resist her.

Part of Homer’s epic poem The Odyssey, the story of Ulysses and the sirens still rings true. A fixation, particularly one of a carnal nature, can lead to downfall, even death. Wisely, Ulysses binds himself to his ship’s mast and orders his men to seal their ears with wax. Only then do he and his men escape the sirens’ song.

This myth is the inspiration behind Pontus Lidberg Dance’s Siren. The piece received its U.S. premiere at the Joyce Theater, featuring performers from Danish Dance Theatre, of which Lidberg was recently appointed the artistic director. Siren is no ordinary retelling — in fact, the program notes caution against that. Instead, it proves to be something much more revelatory than an allegory about male lust.

The non-dance elements point to the source material. Men hoist a lavender-tinted sheet to evoke a rippling ship's sail. This fabric also functions as a screen for a video of smudgy lines that lash like rain in a ferocious thunderstorm. Stefan Levin’s score, which is spliced with Schubert’s turgid Piano Sonata No 18, thrums and hums. With its electronic and symphonic layers, the music imbues the myth with melodrama.

The choreography devotes itself to exposing the inner world of its characters. Low-legged turns, flowing rolls, and gentle lunges stream across the stage. Arms drape over or loop around the head. For all the curlicues that have neither starts nor stops, the pace remains deliberate, occasionally staid. These individuals think before they act.

When desire finally quickens, it manifests as a throb rather than a flail. Tethered to one spot, five men pulse their chests as if their hearts are trying to break free from their bony cage. Sometimes, they drop to all fours while, other times, they hunch their shoulders. But always, they pulse. Desire exists as a contained obsession, not an effusion of messy, unbearable emotions.

There’s a reason for that. Here, desire isn’t just about the ardency of a man’s loins. It’s about a woman, the siren (Sarawanee Tanatanit), who through will and wit unstitches herself from her fate as a literal femme fatale.

In the beginning, Tanatanit floats in a coffin-sized aquarium. After she rises from this watery grave (or is it a womb?), she embarks on a skidding duet with Lidberg, who appears the hero with his swagger and chiseled chest. He manipulates her limbs and sweeps her through lifts, her agency limited to twisting through the holes he constructs. Later, she sheds her emerald-green dress for a suit without a shirt like the men are wearing. Tentatively, then more confidently, she becomes one of the guys, blending into their movement.

Toward the end, the work spirals, reaching around to the start while discovering new crooks. The dancers embrace and kiss on the lips; they also revisit the opening motif of logrolls from downstage to up — a nod to Sisyphus, perhaps. Lidberg and Tanatanit find themselves back in their duet, their roles seemingly reversed. The siren has come into her own. Who, however, will lure sailors to their watery death?

The men raise the “sail” again, but abracadabra, it falls to reveal Lidberg submerged in the aquarium — recalling the early versions of the myth where sirens could be men. The magic trick, though, isn’t the ending. It’s the swiveling of the point-of-view from hero to heroine. From here on out, the siren sings to herself, for herself.