Impressions of: Rachid Ouramdane's "TORDRE (WROUGHT)" at Baryshinkov Arts Center as part of the FIAF Festival 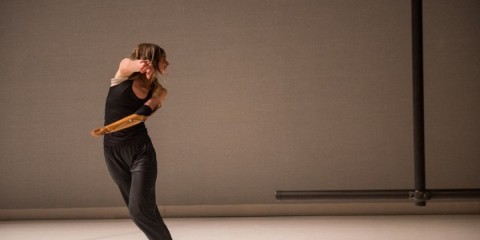 In a place as culturally saturated as New York City, it becomes easy to assume that the world’s greatest talent can be found within ten miles of City Center. Crossing the Line, produced by the French Institute Alliance Francaise (FIAF), challenges this presumption. The festival, which takes place in New York City between September and November, brings in international artists to spark cross-cultural conversation.

Rachid Ouramdane, co-director of the Centre Choreographique National de Grenoble, extends definitions of performer and choreographer, reflecting on the specific identity of his performers while allowing them freedom to take ownership of the work. TORDRE (WROUGHT), the French choreographer’s latest, unravels the identity of two women whose unique physicalities define their relationship with the world.

Annie Hanauer has a prosthetic arm, a fact which characterizes her connection to movement and ultimately makes her a more dynamic performer. Lora Juodkaite has worked since childhood to develop her own gyration practice, a tireless spinning which she uses to comfort and shield herself from her surroundings. In TORDRE (WROUGHT), each woman manipulates her distinct physicality to paint a stirring self-portrait, exploring the interior impulses that drive her to move.

TORDRE, which translates into twisted, acts as a series of intertwining solos that ultimately grows into a duet. Sometimes obsessive, sometimes lonely, occasionally playful, the work is stunningly simple in design and yet spans a vast emotional spectrum.

The pliant Juodkaite is clad in black leggings and turtleneck. Like a gelatinous sea creature, she slithers and writhes and warps her supple body into breathtaking back bends and contortions.

Hanauer's hyper- intelligent body powering of her prosthetic arm contributes to the inimitability of her movement. At times she explores unity in full-bodied dance, other times she plays with the rigidity of her prosthesis to contrast with the fluidity of the rest of her body.

Ouramdane’s movement vocabulary is minimal, but the women probe its nuance and possibilities. Juodkaite’s constant spinning is one of the more dumbfounding parts of TORDRE (WROUGHT). Seemingly never dizzy, she whirls endlessly and then stops on a dime. This spinning may appear ecstatic, like Julie Andrews twirling atop rolling hills in The Sound of Music, or it may seem meditative, like Sufism’s whirling dervishes. Occasionally, it is punchy and aggressive. The incessant whirring hypnotizes, winding us further and further into our own psyche.

In contrast, Hanauer moves as though underwater, navigating challenging balances and weight shifts with airy ease. Her slippery phrases demonstrate total body awareness in a relaxed simplicity. While the solo lacks virtuosity, her control astonishes.

Sylvain Giraudeau’s set consists of two thin black rods that intersect with a horizontal pole at their base, like somber upside-down Ts. One hovers above the dancers’ heads, and another, which Hanauer drapes her lanky body over at one point, hangs just a few feet off the ground, The dark poles juxtapose starkly with the white box theater, as they cast long, stripey shadows on the Marley. When Hanauer crumples into a pile on the ground, her contorted body intersects with the long, cross-shaped shadow projecting an image of Jesus Christ.

The relationship between the women starts and stays ambiguous. In a rambling monologue, Juodkaite references her “sister,” but the women seem like disparate parts of a whole, a left brain and a right brain, or perhaps Hanauer is an older, more mature version of Juodkaite.

In the beginning, the two rarely make physical contact as they transition between solos with a shake of hands. However, as the piece progresses, their relationship becomes more intimate. In a standout moment halfway through, they embrace, their chests softening together as if two could become one.

This intimacy is punctuated by interludes, which are comically presentational. The piece opens with one of these moments: The women rush on stage to a dramatic overture with their arms outstretched in a balletic “we have arrived” gesture. This boastful flair directly diverges from the subtlety found in the challenging movement of their solos.

TORDRE (WROUGHT) can feel self-indulgent in its minimalism. Ten minutes less spinning would have sufficed. Nonetheless, it represents the kind of work that New York City didn’t realize it was missing.

Share your #AudienceReview of this show or others in and outside of NYC for a chance to win a Foodies delight, Gourmet Olive Oil