IMPRESSIONS: RIOULT DANCE NYC in Written for Dance at The Joyce Theater 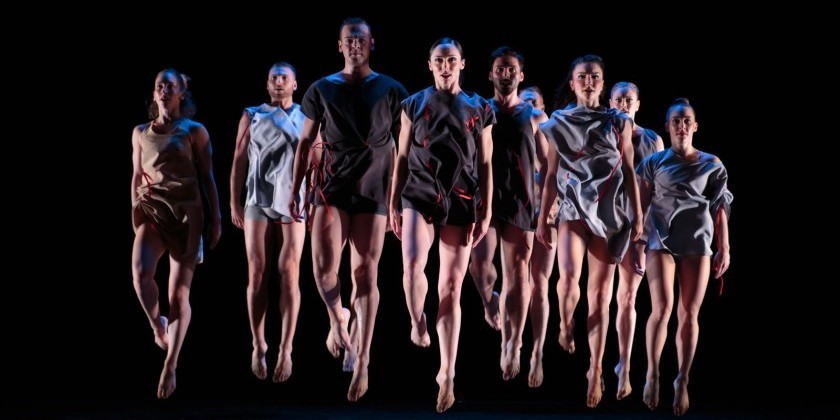 Pascal Rioult, as much a lover of music as he is of choreography, called attention to the work of Russian composers who wrote for dance in his recently completed Joyce Theater season.

The fanciful Dream Suite (2014) danced to Pytor Illyich Tchaikovsky’s Orchestral Suite No. 2 in C Major, finds the company’s gorgeous lead performer, Charis Haines, bathed in golden light, stretching in and out of a pleasant sleep. She dreams up masked creatures — two birds and a bull— who, mirroring the vivacity and romance of the music, run and duck with her among floating lovers, contorting couples, and a two-headed prankster. How enjoyable to watch these surreal characters cavorting in a whimsical space as if they just leapt out of a Chagall painting.

Aurally and visually arresting with sexy details by costumer Pilar Limosner, Rioult’s Les Noces (The Wedding) (2005), set to Igor Stravinsky’s emphatic composition for percussion, vocalists, and piano, presents a contemporary dissection of the marriage ritual. The ballet’s music, originally dedicated, to Sergei Diaghilev by Stravinsky, was first choreographed in 1923 by Bronislava Nijinska. Her work, which many consider a 20th-century masterpiece, depicts the traditions of a Russian folk wedding by powerfully setting movement motifs of a large corps against the simple actions of a bride and groom and their parents. The marriage ritual is portrayed as essential to the community’s continuation — its hope and soul.

For the world premiere of NOSTALGHIA, we are treated to a live musical performance conducted by Polina Nazaykinskaya, the work’s phenomenal, young composer.  Romantic, lush, and sweeping, her score feels cinematic. Indeed the piece is an ode to the poetic vision of Russian filmmaker Andreï Tarkovsky of whom Ingmar Bergman said “…he moves with such naturalness in the room of dreams…”

Hypnotic moving dreamers Catherine Cooch, Jere Hunt, and Charis Haines, respond to the breath and grandeur of the music as they slip in and out of memories of time gone by represented by the corps of dancers. Or is it the corps of dancers who are the reality and the trio simply figments?

As I see it, Cooch attempts to climb into her episodic visions before they disappear; Hunt contemplates his reflections as they haunt him, ominously moving behind him in slow motion; Haines is carried off by her thoughts, as they collapse around her.

The corps work is stilted, jerky. Heels pound, weight slightly shifts, and small body isolations occur. At times their steps recall some type of folk dance. What lingers is the sensation of a weighted, old world, and an uncomfortable dissonance between the past and present. Can we ever truly capture what was? Cooch, Hunt, Haines and the music are all that is vital, beautiful and real in this world.

Kudos to Pascal Rioult’s curiosity and commitment to music, dance and exploration. With each work he offers us new pleasure and shows off the versatility and brilliance of his talented dancers and collaborators. I cannot wait for the adventures we will go on when the company’s new home in Astoria is finished.