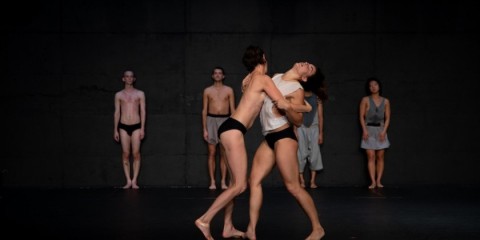 Choreographic Scores: RoseAnne Spradlin in collaboration with the dancers

No one walked out. Even better, everyone stayed rapt until the end. Probably the best, the piece received a second, effusive curtain call.

That’s in marked contrast to RoseAnne Spradlin’s X which was part of the Joyce Theater’s Quadrille in 2016. There, people left early or left grumpy. (I did neither and considered X’s searing imagery to be the most lasting from that festival.)

This difference in reception isn’t due to any alteration in Spradlin’s preoccupations. Those remain intense: repetition, rigor, and an urge to expose and to examine darker impulses.

Y, which received its world premiere at New York Live Arts, veils this strong, sometimes alienating ethos better than X. But make no mistake; it’s there — unyielding and scintillating in its honesty.

The piece commences with what seems to be chaos. Four women and four men spike themselves into the air like a letter I; they flop over, so their heads loll by their feet in an upside down U. A dancer slices a leg and an arm into the air — F. During this roiling alphabet soup, several duos, trios, and larger groups coalesce into momentary sculptures. When Claire Westby rockets into a cabriole, she leans on one crouched body, her extended leg held aloft by another.

The busyness, and it’s very busy, eventually reveals itself to be a well-organized hive. Spradlin has placed her cast on an imaginary carousel, the original “front” rotating to a new direction with each start. They change, so you can change.

It’s not a new idea, having the audience see the same material from various angles. Yet there’s so much to see that it remains gripping. The phrases shade darker and lighter under Roderick Murray’s circular constellation of lights. They sound similar, though; the spare soundtrack by Glen Fogel sometimes mirrors but usually is obscured by the thuds and gasps of bodies pushed to their limit.

The restless, propulsive energy crackles with little respite. Someone, if not everyone, must stay in motion. Occasionally, a dancer or more migrates to the sidelines where they stand like sentries in the shadows, but they don’t linger. As if in a trance, they get sucked right back into the melee.

Y continues like this for a while, the octet maintaining their cool among the sparking physicality  — until they don’t. One starts, and then others join, to dash in a circle. The hub of this wheel, Ainesh Madan, tips his body into a T where he stays steady as the laps add up.

Then, even he breaks form. The community isn’t quite extinct as EmmaGrace Skove-Epes’ prone body attests, but the bonds have been strained as, one by one, the performers leave the stage.

This would make for a natural ending, but like the mythologist she is, Spradlin kinks the arc. Out of nowhere, one man assaults another. They grapple like two boxers at the end of a grueling match. Then, it becomes sexual. A butt is exposed; a hand wanders up a shirt. Annie Heath sits nearby, oblivious.

The others return for a bacchanal, shedding clothing and morals. The connections forged so easily before are now avoided or, worse, rejected. Connor Voss strides away from an outstretched leg, leaving it dangling, untouched. He’d rather slap his hand on top of Skove-Epes’ breast.

Finally, everyone burns themselves out and stands against the back wall as if they’re in a police lineup. They pivot in half turns. They crawl and sprawl across the floor. Near the end, Voss, assisted by another dancer, literally climbs the wall. The art has eaten itself from the inside out.

Why? you ask. Because it’s Y, which is to say it’s RoseAnne Spradlin.