IMPRESSIONS: Rubberband’s “Ever So Slightly” at the Joyce Theater 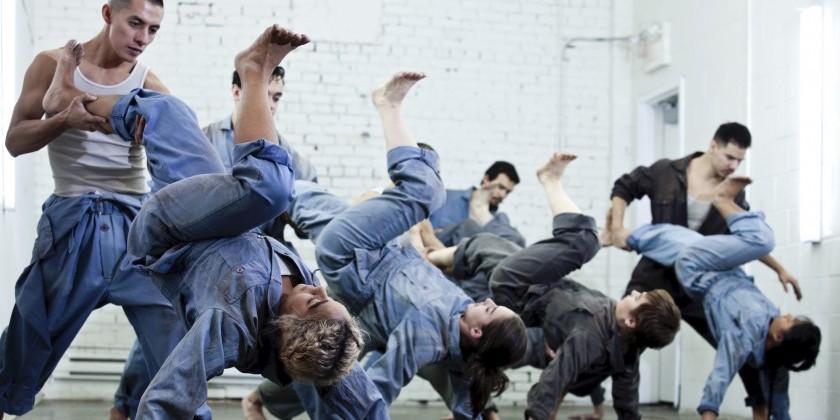 Choreographer: Victor Quijada in collaboration with the dancers

Peaceful guitar chords ripple as 10 performers lie prone across the stage. Slowly they begin to contract and roll like seaweed caught in a wave. Ebbing and flowing, the dancers accumulate and rise, suspending and returning to the floor in kaleidoscope configurations. The movement seems to arise from their bodies effortlessly, as they respond to the score played live by Jasper Gahunia and William Lamoureux. When the electric violin kicks in, their actions become more aggressive. As drums layer, they advance in a Capoeira-like attack. 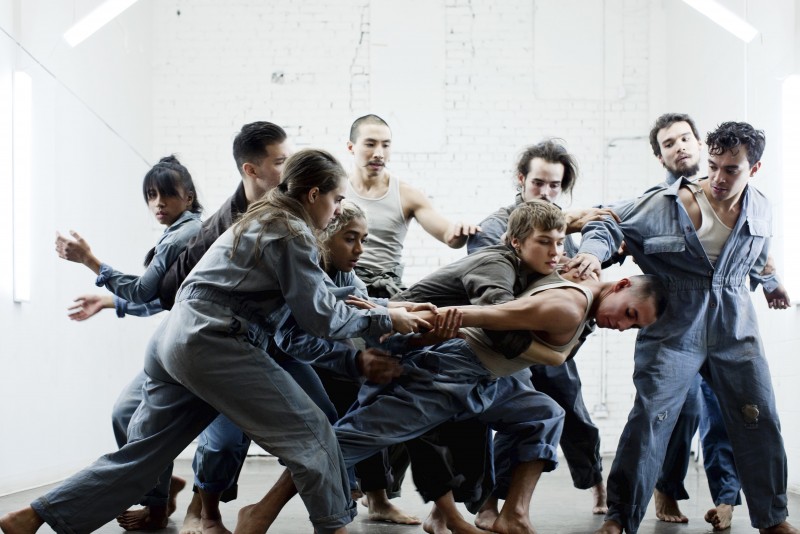 Rubberband's Ever So Slightly; Photo by Mathieu Doyon

From the moment the curtain rises, choreographer and artistic director Victor Quijada and his masterful dancers of Rubberband offer stunning and unrelenting imagery. Delicate, ferocious, and subtle, Ever So Slightly conveys revolt, chaos, and the search for resolution.

Like molecules heating up in close quarters, the performers are wild yet controlled. Their specificity of movement coupled with breathtaking velocity conjures images of brutality and violence. Dressed in drab prison coveralls, the performers seem caught in a riot that soon becomes a revolution. Coalescing and rebounding, they manifest the shared impulses of people pursuing a common end.

However violent their revolution may be, it can only be accomplished through community. The dancers throw each other into death-defying back dives; they rebound like elastic bands. The symbiotic kinetic architecture suggests harmony.

As the high-voltage action climaxes in perpetual motion, dancers peel off their coveralls and use them as bondage, partners, and tormenters. Their soft skin contrasts to the vicious, clawing gestures — shreds of humanity and vulnerability are still present.

Rubberband does not merely present intellectual concepts to be viewed. Rather the company pulls you on a captivating journey, its intensity causing you to think about issues both universal and highly personal: discrimination against immigrants, the herd mentality fostered through propaganda and fear, or the overcrowded prison system.

Quijada melds the form and rigor of contemporary dance and ballet with the vocabulary and spontaneity of break dancing. An accomplished hip-hop dancer in his native LA club scene, he also enjoyed an impressive performance career with companies such as THARP!, Ballet Tech, and Les Grands Ballets Canadiens de Montréal. His Rubberband method, now taught at universities and workshops across the world, trains dancers in his stylistic fusion. Break dancing is an often-overlooked genre in the world of concert dance, but Quijada and his dexterous company are at the forefront of change.

If part one of Ever So Slightly is a revolution, then part two is a rebirth. Dancers pick up and gently relocate each other. Curious and deliberate, they assess their new space as if waking up from a long sleep. Touch that was aggressive becomes gentle, compassionate, as a community rebuilds, cautious and accepting. Slowly a duet develops, one dancer’s movement causing an effect in another, like a conversation, as they learn to work together.

Performers join until peace seems imminent. Suddenly, support becomes a burden, and fear takes over again, spreading confused aggression. Finger-pointing repeats and increases in speed until madness ensues. Convulsions and maniacal laughter take over dancer Jean Bui, and the others can’t bring him back. As he is buried, they tie their coveralls over each other’s faces again and sway back and forth in tight formation, perhaps this time choosing resignation over revolution.