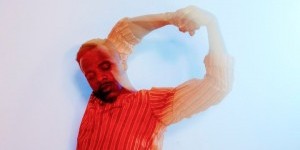 A graveyard is an awfully nice place to catch a dance show. Not just for us, the audience, which on this balmy July evening included dozens of Millennial Brooklynites dressed in hardcore normcore, but for them—the spirits. Seeing as Green-Wood Cemetery has been interring folks since 1838, there are a lot of them. Many lay lonely and forgotten, only a tombstone attesting to their former imprint on the world. I imagine they enjoy gathering with us in the meat world to luxuriate in the collaboration between choreographer Loni Landon and experimental harpist Mary Lattimore, co-produced and co-presented by four/four presents and the Green-Wood Cemetery.

Like a raindrop precipitating a tsunami, a simple, suggestive gesture opens Solace of Surrender. As seven dancers point a foot and then close it, they extend an arm beseechingly, the other arm crooked at the elbow. They repeat and repeat until a performer here adds a tight spin; another there flicks a leg in attitude. Soon, they are streaming through phrases with legs that sweep to the sky and bodies that plunge to the ground. Sometimes, they fold their hands over their hearts, or they slice their limbs as if they’re running in place. Maybe it’s the costumes in shades of gourds and melons, but it appears like a garden has begun its spiraling, tangling surge over the earth.

The tempo and content of that solitary, supplicatory gesture continue to metabolize. The dancers order themselves in clumps of two, three, or four, clasping hands and counterbalancing. Like flesh-and-bone-Rube Goldberg machines, they waft and dart between limbs. My eye registers the arrangements as if they’re bouquets, briefly gifted to us onlookers before nature reclaims them into the eternal cycle of decay and rebirth.

Lattimore’s accompaniment follows a similar yet striking trajectory. Vaguely medieval strums tumble throughout the twilight. As if constructed of sonic starlight, they sparkle for a moment before another overtakes them. The music compounds on itself and then cracks like glass into contrasting electronic thrums and twinkles before reassembling into constancy again. Jagged edges remain, though, and they prick our ears. What is can’t ever be reconstructed exactly as it was.

The emotion swells into a joyous outbreak of skipping and jogging until the dancers ebb away. In the end, one remains. She lifts her arms up and over her head as a breeze floats through the audience. Green-Wood Cemetery looks the same, but it feels different because we feel different.

For those who can stay, a sound bath played by Lattimore closes the evening. Others, perhaps with their souls salved, retrace their steps back to blare and beeps of civilization.

Mary Lattimore in Solace of Surrender; ​Photo by Julia Drummond

Back, In a Solo Again—with Friends: Keigwin + Company Return to The Joyce