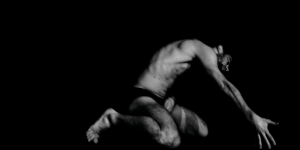 The Dance Enthusiast Asks Stefanie Nelson About Curating "How high is the ceiling in my glass castle?" For Triskelion Arts 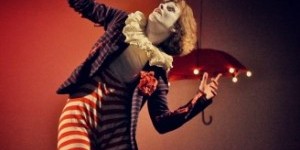 IMPRESSIONS: "A, MY NAME IS. . ." featured as part of Stefanie Nelson DanceGroup's, The Moving Memory Project at Aaron Davis Hall

Before there were apps for kids’ educational games, we played the alphabet game “live” with with one another. The pattern starts: “A, my name is Alice, and my husband’s name is Al, we come from Argentina where we sell Apples.”B, my name is. . . and so on, each player filling the blanks with any names, places, and objects they can think of all the way up to to Z.

Becca Loevy in Stefanie Nelson's A, MY NAME IS. .  . Photo by Gaia Squarci

Stefanie Nelson invokes this child’s game in her  A, MY NAME IS. . . Here, the A, once the first letter we learned to build our brain, also stands for Alzheimer's, the frightening, degenerative disease that destroys it.

A is also for apples, which at the beginning of the piece are lined up, perfectly-spaced at the front of the dark stage. By the end of the work, the fruit has multiplied and is strewn everywhere: thrown, kicked, gathered, thrown again, gobbled and spit out, given to the audience, taken away, then framed as a still life on a side table. Apples fall and float on a video screen above the stage — a slow, unceasing rain.

Becca Loevy in Stefanie Nelson's A, MY NAME IS. .  . Photo by Gaia Squarci

We could be living in the dream world of Rene Magritte, where apples, indeed every object (and in this case, movement) take on a multitude of meanings, at once familiar and absurd. Nelson envelopes us in the surreal to acquaint us with the shifts in reality experienced by Alzheimer’s sufferers. Symbols of recognition, loss, passing time, and memory, swirl abundantly throughout her work. Nelson and her fine collaborators, committed to the poetics of their ravaging subject matter, engage our imagination and inspire understanding and empathy.

Gamine female lead, Christine Bonansea—her creamy fair skin off-set by raven-hair, expressive ebony eyes, and a close-fitting dark outfit—enchants us. She bursts into the space with two other similarly clad women, then is abandoned, left to peer at an enigmatic microphone swinging upside down from the sky.

Christine Bonansea (foreground), and Becca Loevy in Stefanie Nelson's A, MY NAME IS. .  . Photo by Gaia Squarci

After making sounds and laughing into the odd appendage, Bonansea comes to realize that this familiar-unfamiliar object can help her say, “hello.” She greets us and waves enthusiastically. Aha, a connection!  But as quickly as contact is made, it evaporates.

Bonansea is joined by Becca Loevy and Emily Tellier who reflect and refract her actions. They could be versions of her, or elements of her personality. Stretching their arms forward, the three women grasp for fleeting time; they clap their hands together as if to capture the it. Dropping their arms into a loose swing, they let go. “This is time,” says Bonansea in her rich French accent. “This is my time,” she says again and again in moments of clarity.

Becca Loevy and Christine Bonansea (foreground), and Emily Tellie  in Stefanie Nelson's A, MY NAME IS. .  . Photo by Gaia Squarci

Alzheimer's is likened to a bizarre puppet show where the figures become disassociated from themselves. As the trio of women rise and descend, behind a long, black board, the head of one of the women and an apple, hover ghost-like on the the board’s upper edge. Legs emerge from one end of the board, while a head slides out from the opposite side—the grounding center, removed.

Cameron McKinney stands on a ladder at the back of the stage holding an apple which he appears to have just picked. He drops it. Deliberately treading on the outskirts of the stage, he stares at the hand which once held his apple, as if trying to remember the feeling of its weight and circumference.

Cameron McKinney in Stefanie Nelson's A, MY NAME IS. .  . Photo by Gaia Squarci

An ever-present figure, McKinney could represent the persistence of time, an omniscient god, or one of the women’s loved ones, watching, waiting, and living through this real-unreal experience. In a breathtaking solo, he glides to the ground, plunging into a whirlwind of break dance moves, painting intricate floor designs with his body. When he rises, smoke-like, to his feet—all his elaborate patterns gone— we are reminded of complex Buddhist sand mandalas, universes created to be blown away.

I am drawn to the layers of meaning present in Nelson’s work, as well as its luscious physicality and theatrics.

Christine Bonansea in Stefanie Nelson's A, MY NAME IS. .  . Photo by Gaia Squarci

Apples recall the mind, knowledge, memory (and loss of all three), life and death (as when Adam and Eve are cast out of Paradise and denied immortality for eating from the Tree of Knowledge). Then there’s that expression,“Don’t  upset the apple cart.” Well, the applecart has been upended in Nelson’s work.

In a couple of minor moments, I felt overpowered by symbols and choreographic elements.

Watching an apple decay rapidly through stop-motion photography seemed a bit heavy-handed when the rest of the content is so distinct. We know we are dealing with life and death by simply witnessing the dancers and their interactions.

Cameron McKinney and cast  in Stefanie Nelson's A, MY NAME IS. .  . Photo by Gaia Squarci

Toward the end of the performance, we’re taken aback as a group of maybe a dozen dancers, all in black, invades the stage from the audience. (This addition was recently created for the 2019 version of A, MY NAME IS. . . The premiere in 2017 didn’t include it.) The surprise is potent. But after watching rounds of energetic repetition of the core movement, I felt removed from the experience, as if lost in a playground of dancing mimes.

I would like to note that during a talkback after the show, no other audience member mentioned feeling that way. In fact, many of the attendees, caregivers of people with Alzheimer's, were moved to tears. Sadly, all these images reflect their experience.

Read other articles on The Dance Enthusiast  about Stefanie Nelson's work here and here.