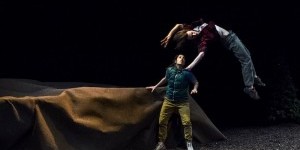 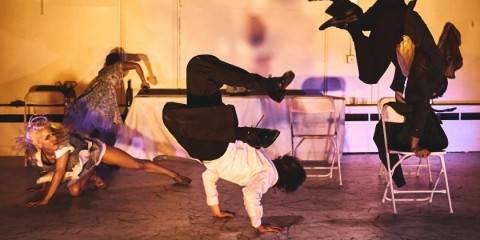 A waitress in a baby-blue apron mops the floor. One small, simple cross hangs on otherwise stark white walls. An old-fashioned radio plays, static between songs.

Soon, a bride enters with her groom. (She’s given away by her calf-length white dress and small bouquet, carried with care.) The waitress now caters to them, setting up four chairs. They slow dance and kiss before a new couple enters. They are definitely not betrothed, their energy that of a first date. They fawn over the bride and groom.

Tension slowly fills the air, betraying everyone’s pasted-on smiles. Something's not quite right. The other woman reads a wedding toast from note cards, many of her lines cliché statements about lasting romance. Her voice and face drop halfway through. She seems to long for something, but it’s not quite clear what. She rallies and rejoins the party. The bride flirts with the other man. As knowing glances fly about, the couples become more interchangeable.

VIM VIGOR’s FOREVER is the story of a wedding with recognizable clues heralding a story yet to be unfurled. There are flowers, drinks, cake, napkins, a microphone for wedding toasts, and even new plates from the registry.

But we won’t get the full story. We won’t really ever know what affairs did or did not happen. We won’t know why we are let in on the inner monologue of the waitress, outlining the steps of her morning routine at home as she prepares to go to work — although this text seems important in revealing her inner life. We won’t fully understand why suddenly a mother is introduced three quarters in, but we will guess, trying to make the connections from what we are given. FOREVER fulfills expectations for dazzling choreography, but its many unanswered questions keep us at arm’s length from the central themes.

Dance theater artists like Shannon Gillen are faced with unique storytelling challenges. Inside the trappings of a play, movement calls for clearer motivation and cannot be included just for movement’s sake. When searching for characters’ objectives and needs, the artist must mine dance moves for story just as much as they mine spoken text.

This production incorporates both, but the selected texts (spoken by performers as well as lip synced from recordings) are not grounded in the same way as the movement. Rather they float as indefinite clues. While VIM VIGOR’s performers exhibit unwavering confidence when they dance, they sound a bit awkward in delivering lines, as if they aren’t sure where in their bodies the sounds are coming from. Yet, when switching from technical movement to natural pedestrian action, they are light in their adaptability. Acting and dancing feel like two different modes because they call on two entirely different skill sets.

The sheer physicality of Shannon Gillen’s choreography already challenges the physical skills of most contemporary dancers. VIM VIGOR’s signature floorwork requires more than a shoulder roll or two. Casually bouncing up from their backs as if possessing springs in every joint, this cast shows a mastery of Gillen’s tricks and techniques. Her dancers are at home with impact and at peace with falling.

At one moment, the light flickers and dims, catalyzing a mad flurry of unison flying and rolling. As pure choreography, it is impressive. The whole back row of spectators, blocked by heads in front of them, don’t hesitate to stand up to better see the dancers move in and out of the floor.

The storytelling, sprinkled amongst the choreography, does not follow a single character’s emotional journey but jumps around the cast, offering short glimpses of each person’s psychology. This makes it difficult to grasp the stakes of this night or to invest fully in anyone.

In terms of separate vignettes, FOREVER shines brightly in several moments. When the groom (Jason Cianciulli) and the waitress (Jessica Smith) are left alone, they battle in a violent and erotically charged duet. Twisted effortlessly around her mop, Smith is tossed about the space, in and out of Cianciulli’s arms and pinned underneath the wooden handle. With the mop head connected to her own, he rings the strings dry as if twisting her hair. In the most inventive partnering of the night, no idea is left unexplored. But again, the question of their bond or conflict looms.

In another clever transformation of props, Cianciulli locomotes entirely on the surface of plates that are constantly moved and replaced by the other four performers.

The mother, the sixth character, makes an abrupt entrance holding a swaddled “baby,” only to pass it off to the Bride and then freely flounce in a featured solo. When she exits, the baby unexpectedly transforms to white roses. When, in the final image, the performers scatter these flowers on top of the bride’s body, it all feels funeral-like. Has this wedding brought about a “death” of this woman’s identity? Is this inevitable future, motherhood and the end of single life, actually too much to bear? And the rest of them, how do they fit in to that fate?

FOREVER’s conclusion seems an ellipsis rather than a period. Gillen and her team of collaborators have filled the stage with images, but in their abstraction, they don’t connect to a thesis. More remembered as dancers than as bride, groom, or guest, these performers have shared one thing for certain — this is not a happy-ever-after.

A Day with Shannon Gillen