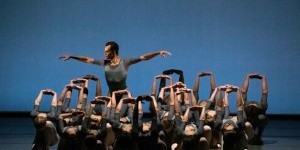 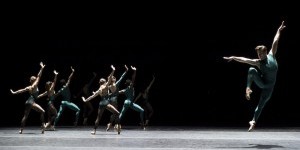 William Forsythe's "In the Middle, Somewhat Elevated" at 30: Then and Now

IMPRESSIONS: William Forsythe’s “A Quiet Evening of Dance” at The Shed

Quiet isn’t silent, and choreographer William Forsythe knows the difference. In his A Quiet Evening of Dance at The Shed’s Griffin Theater, the primary soundtrack in the first act is the dancers’ pants, grunts, and wheezes. Occasional bird chirps and, later, a sparse, grumbling score for piano do knock at the musical void, but the result remains the same — to make you see the movement. Absence directs attention to presence.

Because it’s Forsythe, there’s a lot to see. What you see — and why you see it — may reflect your dancing history.

For me, crossed wrists, one leg extended in croisé derriere, evoke the lasting legacy of a 19th-century swan. To you, fluttering bourrées could point to La Sylphide or maybe Balanchine’s Emeralds. A man kneeling, his chest lifted, is the final flourish after any classical variation even if that variation exists only in our collective memory. Quotes flicker throughout, a series of winks and nods to anyone who can catch them.

The eighty-minute performance contains new and newish compositions. The opening quartet of works refers to and comments on ballet, both its origins and contemporary practices. The second act, Seventeen/Twenty-One (this signifies the 17th and 21st centuries), integrates the previous studies into a radiant climax for ten to Jean-Philippe Rameau’s pellucid “Hippolyte et Aricie: Ritournelle.”

Throughout, the cast maintains a uniform of T-shirts, pants, and, often, vividly hued sneakers and opera gloves. These colorful accents on the feet (usually pointed, but sometimes with articulated heels) and the hands (usually curved with all five fingers visible, but sometimes flexed, like stop signs) filigree the choreography even when it veers into post-modern paces and swiveling directional changes.

Although Seventeen/Twenty-One is my favorite and Dialogue (DUO2015) the most interesting, Catalogue may be the most important piece. Jill Johnson and Brit Rodemund swing their arms through fast, flattened port be bras. The pathways come closer and closer to their bodies until they stroke and smear their fingers down their arms and across their chests, like artists using charcoal to shade and highlight what the viewer should see.

Soon, their parallel foot placement blooms to first position. This turnout allows them to move from tendus and relevés into the skimming jumps and courtly promenades of the Baroque dances. All the while, the two emphasize épaulement, the mannered torque of the upper body.

Ballet can be reduced to a few things (a technique, a history) or expanded to include many things (same-sex pas de deux, plenty of Forsythe’s work). A Quiet Evening of Dance zooms in on ballet’s tidy geometry of the joints. Like a jewel’s facets, the angles of the elbows, wrists, knees, and ankles provide both form and function. The dancing literally sparkles within the exacting organization of limbs that fold and extend.

Yet there’s more to see than just that. The ball-and-socket joints (shoulders and hips) coil and jut; spines swerve and undulate, the formal, uncompromising posture of ballet’s military roots rarely appearing. Here, the body reveals itself as a staff of impulses that organizes into physical chords.

With the tempo relentlessly allegro and the choreography teeming, the dancers can’t travel long distances in one stream of physics-defying movement as they do in classical ballet. Instead, layered phrases spurt in one direction and then pause before suddenly commencing in a new one. This reflects the dynamics of ballroom dancing — the other, less-critically-examined form of dance that developed alongside ballet in the courts of Louis XIV.

To say that A Quiet Evening of Dance is about ballet is true. But to say that it’s only about ballet is untrue. Rauf “Rubberlegz” Yasit takes the elegant geometry of ballet and moves it forward into flesh-and-blood calculus. He dances as if his body were a magic trick, his limbs starting in one place and ending somewhere faraway, the journey between a mystery.

Now that’s something to see.