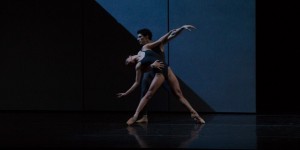 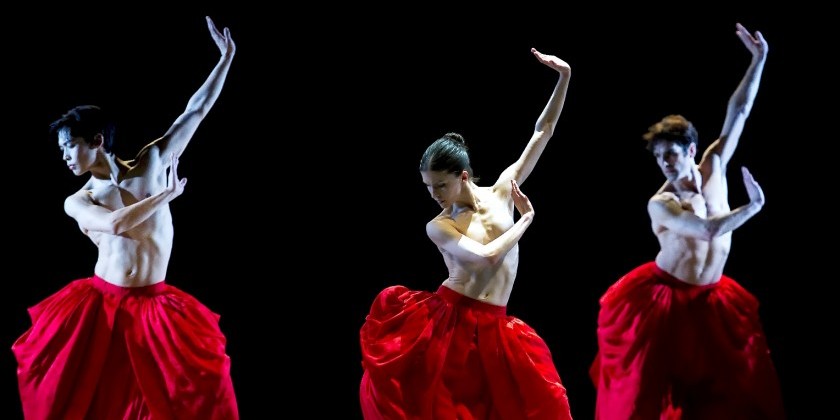 Founded by E. Virginia Williams, Boston Ballet celebrates 50 years this season with its first ever engagement at New York’s Lincoln Center. The company showcases its dancers in mostly contemporary repertoire that allows for a glimpse into the vision of artistic director Mikko Nissinen, who has led the ensemble since 2001. This programming of deconstructionist works mixed with beloved classics accentuates the paucity of new pieces that one has the opportunity to experience by the major New York companies. Even if not every work was a winner, their outlook made Boston Ballet’s New York appearance an important one. Besides, the concerts featured beautiful dancers and dancing.

William Forsythe’s The Second Detail, first performed in 1991, seems oddly dated in its (almost always) frontal approach. The dancers look as strong as racehorses in numerous off-center extensions, and the formations are clear cut and finely executed. The apparent choreographic intent to have the dancers relentlessly face the audience, though, becomes tedious. Even in a fashion show, the models eventually turn around.

Similarly concerned with its effect on the audience, Alexander Ekman’s Cacti (2010) is self-reflective, self-referential, self-reverential, self-mocking, funny at times, and too cute for most of the ballet. Yet, between all the trappings of overlaying text and having to handle cacti on small platforms, there are sublime sections of dancing. The dancers excel at the occasional momentary fusion of balletic and contemporary material. The piece succeeds in its absurdity, and when a dead cat falls from the sky, even I cannot help but laugh. (Presumably no real animals were harmed.)

Using the music of Franz Liszt, José Martinez’s Resonance was commissioned especially for the company this year. Martinez, the current artistic director of Spain’s Compañia Nacional de Danza, showcases some of the same finesse in partnering and timing that he demonstrated when he was one of the treasured étoiles at the Paris Opera Ballet. In a 2009 documentary by Frederick Wiseman, Martinez contemplates two options for executing a double tour that lands in fifth position before balancing in an arabesque. In one, he anchors the fifth position before he changes his body direction; in the other, he springs into the balance from the intermediary landing. Both are perfectly completed, and you marvel at the richness of his choices.

This same care informs his choreography. In Resonance, you see dancers wrap limbs around other dancers’ limbs in mysterious ways. Flow and ease are the main ingredients, which convey an unforced intimacy between the dancers. A pianist sits at the usual off-stage spot, but after the work’s first section, a wall narrowing the stage space is partially pulled aside. It reveals another player, who interprets the next movement. Is there outside music that we listen to and inside music that moves us? Subtext aside, I wish the wall would stop being moved over and over again. These busy shenanigans cause the dance to get lost. When the wall is turned to reveal emptiness, you long for the resonance that the marvelous partnering promised at the beginning.

Doubtlessly intended as a bow to the dancemaker whose long-time home was used for the season, who could argue with the inclusion of Balanchine’s Symphony in Three Movements to Stravinsky’s rich score? Let me be devil’s advocate. Unless you are Edward Villella or Suzanne Farrell with a vision of and an insight to the work that no one else in New York possesses, then I do not want to see Balanchine fare — no matter how delicious — that I get to taste all year anyway.

Boston Ballet’s conductor does take the symphony’s tempi slower than what we are used to, which gives surprising clarity of the choreographic structure in the group sections. Yet, it does not allow for any flow in the central pas deux. The female principal in particular does not let the movement speak for itself; she announces each step with a corresponding facial expression. The corps de ballet, though, looks well trained and their precision and symmetry impress. The final tableau is a stunning lesson in staged architecture.

The other work even more familiar to me (not the least because I performed the central role) was Nijinsky’s Afternoon of a Faun set to Debussy’s music, which is rarely seen in New York. Boston Ballet’s reconstruction by the Paris Opera’s Ghislaine Thesmar is quite different from what I am used to, but the beauty of the sets and costumes (after the original designs by Leon Bakst) is enough to immerse oneself in the story of the Faun whose afternoon nap is disturbed by nymphs. He has a sensuous encounter with one of them, and, retaining her veil, he prostrates himself on it before the curtain comes down. The furor at the work’s Paris premiere in 1912 caused impresario Diaghilev to have his company reprise the work on the spot. A dance legend was born.

Afternoon of a Faun, Photo by Rosalie O'Connor

What was outrageous back then seems an anachronism now. Here is a work so beautiful and stylized that it creates the impression one is looking at it under glass. I question some of the choices in direction and coaching and would like to see a more naturalistic impression within the two-dimensionality of the work. While the hieroglyphs and vase engravings that inspired Nijinsky were two-dimensional, some of them featured fully-fledged characters rather than mere caricatures. As much as one can revel in the beauty of the setting and delight in the ebb and flow of the orchestra, this performance reminds me of cutout figures, who dance by the number.  A more sensually charged performance of this seminal work would make even today’s viewer’s spirits rise.

Jorma Elo’s Plan to B (2004) and Jiri Kylián’s Bella Figura (1995) are not my favorite works of these choreographers, but they make good use of the strong dancers of the company and illuminate the many choices that today’s dancescape has in store. Boston Ballet’s dancers do a great service by performing all of the contemporary works with technical exactitude and brio.

I hope that the full houses that greeted the company at Lincoln Center will inspire the artistic directors of the major New York ensembles to invest in contemporary work by an array of living choreographers.