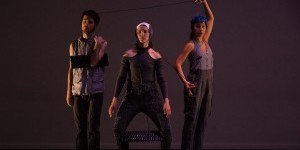 Impressions of Work Up 2.1

Kimberleigh Costanzo's All the Different Kinds of Sweat employs a simple movement vocabulary of side-to-side steps, walking and running patterns, and quick arm movements to communicate the emotional disassociation stemming from sexual assault. As she slowly moves across the stage, reading fragments of diary entries printed on crumpled paper, her body language swerves between uncertainty and confidence. Her arm flicks so that her elbow points up and her hand rests behind her shoulder. She's shielding herself, or, perhaps, posing for the audience.

The stark overhead lighting, combined with Costanzo's choice to withhold eye contact until later in the piece, reinforces her exposure and vulnerability. Eventually the side lighting grows brighter, casting a double shadow against the back wall. Suddenly, there are three Costanzos — her image, if not herself, multiplies. Rather than offering familiarity, it conjures shadow lives, alternate endings and invisible layers of trauma, which must be accessed before healing occurs.

Kimberleigh Costanzo in All the Different Kinds of Sweat. Photo: Scott Shaw

Instead of resolving its multiplicities, this short, complete work ends on an almost unbearably tense note. Costanzo runs in place under a spotlight lifting to her face the papers — the diary entries — she'd read as confessionals only minutes before. I applaud her for her brave choice not to console the audience.

In a farther aspect,choreographer and performer Lily Bo Shapiro creates a bizarre mating ritual set within an unusually complex depth of field. She performs her work with the mirrored classroom wall revealed on stage left, allowing audience members to watch her, or her reflection, as they wish. She  increases the way her image can be consumed and the effect is cinematic, zooming in and out as she moves. Shapiro sits close to an audience member in the front row, then moves backward to plaster herself against the upstage wall. Sometimes she retreats “offstage,” or out of the room entirely. For Shapiro, traditional stage parameters are merely a suggestion.

Though a farther aspect opens with an uncomfortably long static pose, Shapiro eventually introduces hand movements, scuttles, twitches and broad traveling steps. She slumps in a shoulder stand while her fingers continue a delicate gestural conversation of their own. Shapiro's focus and visual language render her movement exceptionally clear, even as her ultimate goal remains elusive. Her loose gold top and white, knit shorts are both hip and frumpy, offering glimpses of her skin through the fabric but obscuring her shape as she moves. Is she taunting, or merely shy? Shapiro, utterly unafraid to look awkward, has created something deeply honest.

This work lingers in the mind thanks to its irreverence and vision, but also because Shapiro is one of only two contemporary choreographers that I've seen lately who uses neither vocalization nor music with lyrics in their work. a farther aspect is all the more powerful for defying trends.

Miřenka Čechová's Vivisecti is a highly stylized examination of the sum of our parts. Two strange creatures, gorgeous bejeweled legs and white, inverted hoop skirts, sit on chairs. They're close but remain too far away to touch no matter how much they gyrate nor spread their legs. As the name of the piece implies, the costuming cuts apart and sections off these bodies, putting them on display and forcing them into blind conversation.

The accompanying soundtrack, by Matous Hekela, gurgles and sighs, reminiscent of digestion. Addressing the creatures' hunger, sexual desire and isolation feels urgent. Eventually they stand and smooth down their skirts to reveal a hysterical surprise: Torsos adorned with plastic sandwich bags full of fruits and vegetables. Now, the creatures are just people — tremendously subtle performers Denisa Musilova and Martin Goga — holding the audience rapt under their gazes. As they munch on snacks from their respective bags, it's unclear whether they've been satiated — or if that's even possible.