Dance Up Close to Faye Driscoll 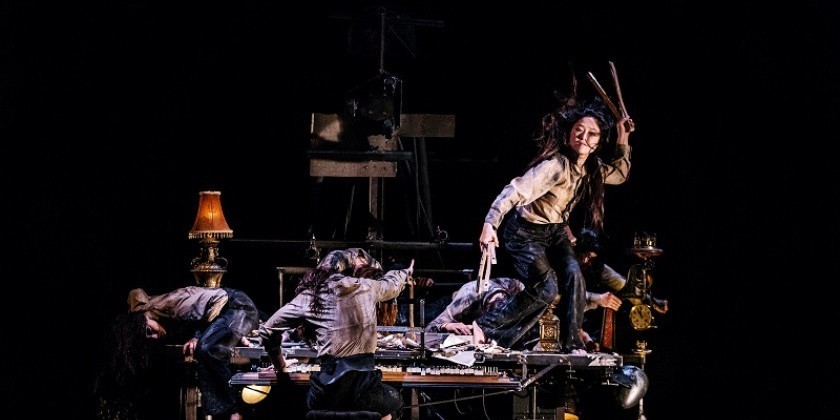 Tabac Rouge (Red Tabacco) is dark. It is set in the smokey bowels of a theatre, with pipes and ropes hanging everywhere. Dusty bodies are draped across the light booms, as if they'd been forgotten. From beginning to end, the work speaks of death, decay and violence, and the perversity of a highly creative mind. I like to imagine it as a psychological landscape, with the supporting cast of nine playing different mental aspects of the main character, an old man played by James Thiérrée.

A group of women bind together like a nest of snakes. One of them has an especially intimate relationship with the old man, coiling easily around him, her foot patting his shoulder affectionately—his special Muse. Full of bright sunshine, she entertains him with her playful antics and contortions, even losing her head (literally) for a while.

The piece transitions into nightmare, the old man wants to leave, but the women pull him back. The group throws themselves at his feet, one after another, as if begging him to 'See me! Pick me! Play with me!'  But they also seem to be pleading with him to keep creating. Eventually their writhing chaos entices him to join them, and he disappears completely into their nest.

There are two other men in the work, in addition to Thiérrée. One stands out as a Majordomo figure. He is in charge of the entire household. He is very irritating -- most particularly as a mover. Like the Muse, he is a contortionist, but he performs wriggling movements with so little sense of his own center that all we end up seeing is a bunch of squirming, to no great affect. And-- this character keeps taking away the music the old man likes to listen to!

By the nightmare section, the Majordomo has stopped the old man from doing anything--standing up, talking, crossing his legs, even scratching his ear. Still, this figure comes in handy from time to time: rescuing the old man when he is lost in the hive of women, and at one point bringing the the ancient one back to life when his heart stops beating.

In spite of how heavy the work is, Thiérrée sprinkles in wonderful moments of whimsical humour.  When the old man starts destroying things, for example, he crumples a piece of paper up into a ball. The Majordomo temporarily becomes this piece of paper, replicating its movements simultaneously and perfectly! The old man, changing his mind, un-crumples the parchment and smoothes it out. Pleasure and satisfaction reign. Then, staring straight into the eyes of his Majordomo, he tears the paper into little pieces. The response, from the Majordomo (even though we can't hear one) is  "How could you do this to me?!  You know I cannot possibly tear myself into a million teeny tiny pieces like that!"

The work is dense -- almost overwhelmingly so. This is one of the things I love about it- the piece overwhelms the logical mind and forces us to swim (or drown) in a universe of poetic imagery. Tabac Rouge is a departure from past productions in that it is more dance-drama and less circus-entertainment. Uncomfortable and unpleasant, it lacks much of the beauty that has been at the heart of Thiérrée's previous works, but this does not diminish its value or importance.

The piece doesn't always gel and definitely goes on too long. (I also don't appreciate that his two main supporting performers are not clearly noted in the program.) Nevertheless, at its core Thiérrée and his team have created a brilliant work that plunges courageously into the chasm where madness and creative genius meet.