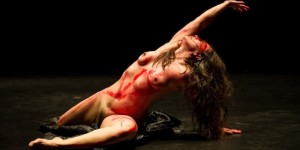 In 2014, luciana achugar (she spells her name with lowercase letters) premiered Otro Teatro at New York Live Arts. Otro Teatro opened conventionally enough: achugar, in a black shift dress that showed smears of red on her legs, twirled in ceremonial rapture. Then, something odd happened. Audience members began moaning and writhing and thumping down the stairs to join her on stage. It appeared that achugar's dancing had hypnotized these individuals — later revealed to be plants — into a trance.

Co-presented by Gibney Dance and the Chocolate Factory Theater, achugar is back with An Epilogue for Otro Teatro: True Love, which employs similar elements: length (like the original, this pushes past three hours), theme (dance as ecstasy), and ritual (as manifested through rhythm and repetition). This piece, though, lacks a grand revelation. 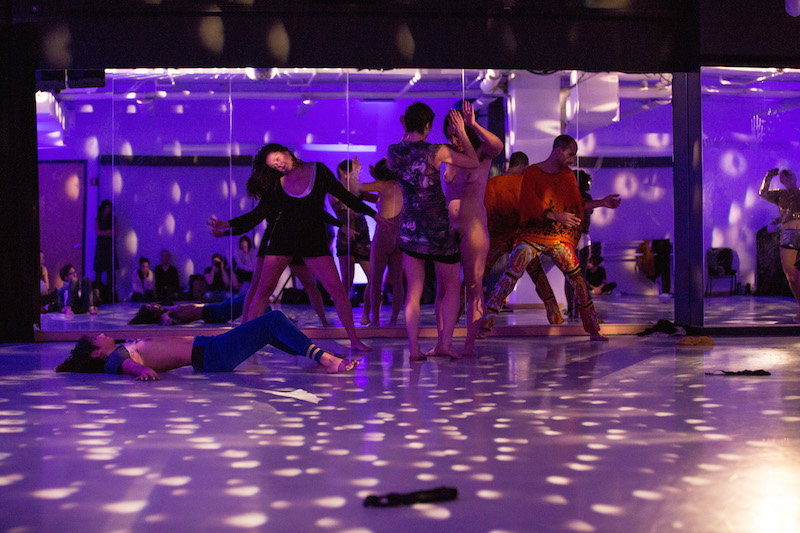 There's no formal start. The audience sprawls along the perimeter of a brightly lit vanilla-box studio where an immobile disco ball hangs from the ceiling. The performers (two men and six women including achugar) bop around in hoodies and shiny leggings. DJ Peter Jacobs, who evokes a yogi with his bare feet and serene demeanor, spins beats laced with soulful melodies.

The vibe still chill, the dancers clump together and stamp their feet in a loose Merengue. Atypical to established performance practices, where the projection is outward, everything is decidedly insular: eyes gaze down, shoulders hunch, and hips swing side to side, all in a form of cadenced navel gazing. From our vantage point, it's like observing a rehearsal of "dancing at a club."

For the longest time, it feels as if this is all that happens, all that will ever happen. In the audience, eyes glaze over and a few surreptitiously check their phones. People leave. Some return, plenty don't. The disco ball remains motionless.

However, achugar is a master of transitions. So subtle as to be almost unnoticeable, the lights dim, the volume amplifies, and the clump splinters. The movement grows wilder, uglier, bolder. Some of the dancers give up and tilt into restorative stretches. The disco ball begins to revolve. 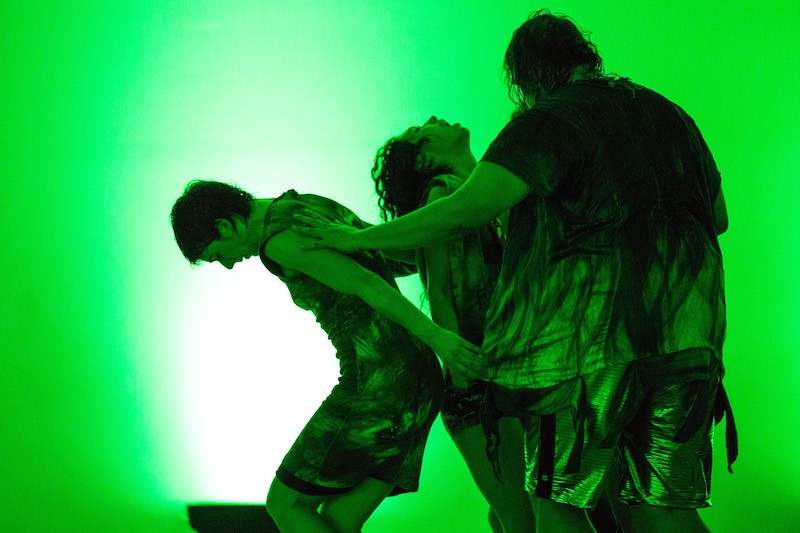 According to the program, the piece is divided into four sections: True Love, Praying, Unraveling, and Spellcasting. In reality, it feels like one long arc from light to dark, from rhythmical sensibility to visceral sensuality. Clothes are shed and replaced; connections between performers’ feet and fingers are made. Second winds are found as the octet segues from punchy prancing to exultant spinning and back again. They end strewn across the floor, puddles of squirming flesh too exhausted and euphoric to respond to the ceaselessly thumping music.

Except for Shantelle Courvoisier Jackson. Supple with a burning intensity, her energy never ebbs. Her hips find the corners in the chunky beats, and her arms imprint zigzags against the air, which stinks of sweat and pleasure. Even when it looks like everyone is doing the same thing over and over, she locates possibility in the monotony.

In the program notes, achugar discusses the inspiration she derives from house music, both two decades ago as a new-to-New-York dancer and now as a reputable choreographer. An Epilogue to Otro Teatro: True Love seems an attempt to marry the stage to the club. To the artists, it may succeed. To the audience, the club democratizes: Everyone and anyone can access transcendence through the alchemical act of moving to music. In contrast, the stage suggests a hierarchy between the passive observer and the active performer. Here, we function as wallflowers to their party animals. 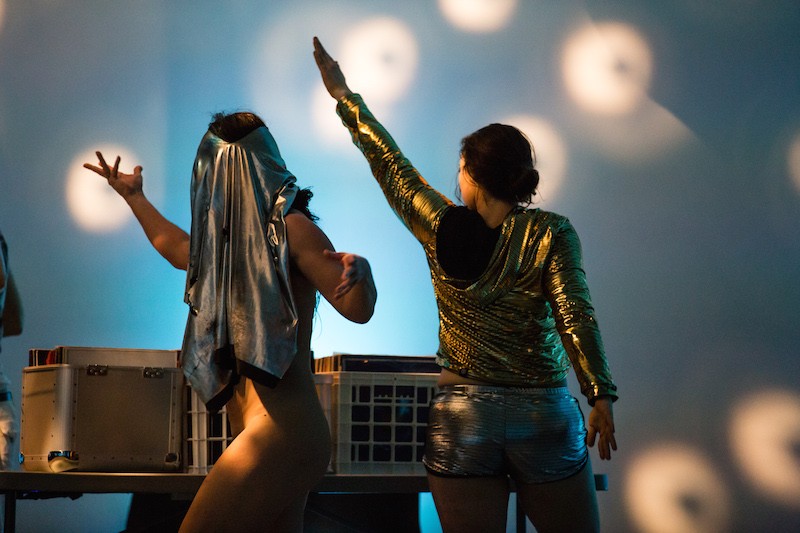 It doesn't have to be this way. One daring audience member joins the fun, and the cast welcomes her. The rest of us sit and watch, watch and sit, stupefied into inertia. With no permission to blur roles, the hierarchy remains unchallenged.

Eventually, everything comes to a full stop. But just for a moment. The DJ mixes another song, and the weary dancers cannot resist its pulsing siren call. The disco ball may spin again, but most of us don’t care. We trudge out, resigned to the ancillary nature of our presence to their experience.