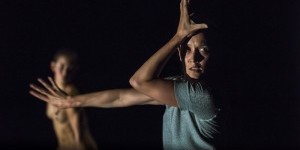 Dedicated to the memory of the men who lost their lives in the West Gate Bridge collapse in Melbourne on October 15, 1970 and their families
By Christine Jowers © 2009
Grief can be sloppy, incoherent and all encompassing. Tragedy is monumental and dramatic. I admire a choreographer who can speak of catastrophe without giving in to ponderous rambling or melodrama. Lucy Guerin did just that, leaving her appreciative audience at the finish gasping, “aha”

Guerin’s Structure and Sadness is all simplicity and clarity. Nothing extraneous or plodding distanced the audience from the works’ spirit.

The performance began on a dark and smoky stage --thin shafts of misty light shone down from above while a few bright squares of light thrown askew on the floor suggested a broken landscape. Just up of center stage stood a rigid rectangular plank-- building material glowingly lit and man-sized, with neat lines of small holes-- like a huge pegboard. Eventually we realize there is a man behind it. He begins to manipulate this thing. It is pliable –a surprise. He plays with it, hangs over it, bends it, twists it around his form melding it and, finally, floats it above his head until the board appears to take flight, or could it be that it is buckling on his head suggesting impending disaster?

This solo with board is a short story on its own, a little gem subtly revealing who and what we will be dealing with in the tale to come. Throughout the work there are many elements illustrating the relationship of man to material--beautiful bits of play engrossing because, similar to the introductory solo, the artists become one with the equipment they work with.

Dressed in grey work clothes, the dancers perform mostly duets and solos, with movement suggesting flight, swaying in the breeze, and balancing while buoyantly unstable. There is a section where two male dancers, each armed with yardstick long thin wooden planks, press the ends of the sticks into each other’s bellies. They balance their props between shoulders and hips, creating lines, angles, and triangles while twisting and rolling the planks like majorette’s batons. All this is done with the precision of a machine. Another segment involves two dancers precariously playing with tension and release as they move opposite each other on either end of a springy, wire cord rectangle. They pull back and forth, shifting from balance to imbalance until one dancer suddenly escapes the springs. The most percussive little movements happen during a women’s duet-- tiny upward flexed wrist gestures reflect some sort of layering of material, while rapid teeterings from side to side offer an alternate view of unsteadiness.

The dancers focus throughout remains always on their tasks. They are their work.
In between moments of dance, the performers matter of factly build. They create a winding structure of blocks and wood planks that eventually snakes from downstage to upstage changing level and shape until finally becoming a mountain. The collapse of the bridge begins as one dancer hits the board furthest downstage causing each wooden piece to fall one after another in a rippling chain reaction similar to dominoes.

The dark abstract beauty of Structure and Sadness is interrupted harshly when a live-recorded radio announcement of the collapse of West Gate Bridge interrupts a woman mock doing dishes and crooning “ Crimson and Clover ”. She freezes. It is a dose of reality that stops her world. There is no angst ridden dancing.

As the work progresses in this newly defined empty space, we are re-introduced to choreographic material seen earlier on. With no structure in the way, movement fills the stage. We can see people. Perhaps this section was about honoring the actual men who gave their lives to their work- the builders (at least that is how I saw it). It was their moment to be acknowledged.

Finally, several of the cast come to rest, lying one after another, head to foot, head to foot, in a long horizontal line on the floor. They were workers just a minute ago; they are at rest now. Their time has passed. A girder that had been used as a prop throughout the evening- first a seesaw, then a bench- -is rested gently on top of their remains.
The lights fade as the dancers left behind gently walk across the beam.

A Conversation With Lucy Guerin