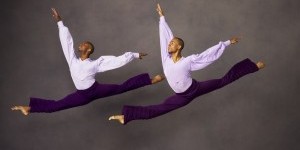 Have Yourself A Naughty Little Christmas

Back with their first full length production since losing their Bond Street theater in Hurricane Sandy, Austin McCormick’s Company XIV, known for extravagant, and genre-melding productions, is once again ripping open corsets, pulling up stockings, and raising eyebrows.

Particularly for non-dancers, the Nutcracker can feel like an antiquated seasonal tradition. In this dazzling rendition, the childhood tale unfolds into a sensual fantasy, leaving us enlivened and a little aroused.

Audience members expecting the full story of The Nutcracker may be confused. McCormick treats the traditional Nutcracker like a sampler platter, taking what he wants and leaving the rest; he ditches the party and battle scene completely and skips right to the good stuff.

The extraordinary Laura Careless takes on the role of Marie-Claire, a naive and curious young woman on the brink of a sexual enlightenment. The loose storyline chronicles Marie-Claire’s eye-opening journey into the sensual land of sweets.

Unfurling like a  like a strange dream, the evening engages us in a series of bizarre and sometimes incongruous fantasies. Just as the Kingdom of the Sweets is a compilation of tastes from different cultures, random pieces of pop culture make sense among the traditional fare. Numbers such as Madonna’s Material Girl, seem at home among Tchaikovsky’s classical score.

Jeff Takacs portrays Drosselmeyer like a raspy Tom Waits, and Shelly Watson is his sassy, voluptuous mistress. Watson carries the show along, guiding our attention with her bold, operatic voice and theatrical presence.

Backstage and the performing space are one and the same as the designated "performance" area takes up about three-quarters of the actual stage. In the background we see into the dressing room: costumes hang, couples embrace, and performers sensually dress and undress one another.

The first half of Nutcracker Rouge strings together various delicacies, many inspired by the spectacle of the circus. One jaw-dropping number is Courtney Giannone's gravity-defying hoop performance to Tchaikovsky's Trepak, traditionally a Russian dance for three men. Giannone soars though the air with elegant finesse, impressively balanced on gigantic hoop.

In an untraditional Spanish performance, Marisol Cabrera, sporting both ruffled skirt and mustache, flirts her way through the audience, castanets tapping. She strips off her garments one at a time, and by the end, she stands topless on a chair, confronting her admirers.

Davon Rainey, a bit of comic relief, emerges from a giant cake singing "If I Knew You Were Comin’ I’d’ve Baked a Cake.” Rainey, one of McCormick's long-time muses, is aggressive, flirtatious, and campy. He stomps about in heels, which accentuate his long, sinewy legs before tripping face first into the cake.

And then, the magical moment we have been waiting for — the deflowering of protagonist Marie-Claire. Careless, freed of her constricting 1700s baroque costume, performs an astounding Sugar Plum Fairy pas de deux with Nutcracker prince Alexander Hille. Rolling around in the pure ecstasy of new love, the two grasp, claw, and throw each other with intense passion and urgent, raw desire.  Careless, indicating her maturity as a dancer, gracefully navigates the subtle nuances of the flashy choreography.

In the world of Nutcracker Rouge, gender is ambiguous and sexuality is abundant. The work navigates the boundaries of art and entertainment; it's not just tits and ass (although there is a fair amount of that) — it's clever, mysterious, and substantial.