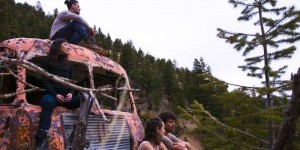 Choreography: Zvi Gotheiner in collaboration with the Dancers

Sitting on my barstool at Joe’s Pub, The Public’s clubby, miniature performance space, I notice an appealing couple standing in the aisle before me. Zvi Gotheiner’s company, ZviDance, is about to launch into their reprisal and reimagination of his 2016 multi-media collaboration, On the Road. I’m trying to focus on video designer Josh Higgason’s images evoking the American road trip that inspired Jack Kerouac’s 1957 seminal novel when a couple, so near I can see the glint in their eyes, steals my attention.

As the lights dim, they strive to get somewhere (perhaps to their seats). The woman sets out in one direction; her companion tries the opposite path. As they veer apart, their clasped hands prevent their separation and jolt them to a halt. Now, how do they proceed?

This episode, lasting only a handful of seconds, won my focus away from the show I was readying myself for. A moment later, I understood that this tense, intimate episode was the show.

ZviDance’s On the Road at Joe’s Pub is a more immersive experience than that of its premiere at BAM’s Fisher space. Gotheiner smartly adapted his hour-long work for this more constrained space. Having not seen On the Road in its other incarnation, this performance did not leave me feeling I missed out.

Drawn in by the dancers’ movement within our arms’ reach, I felt like an accidental witness to intense, private moments of passersby. I marveled at Gotheiner’s clever ways of maneuvering his cast to and from the stage (in one section, a woman—aided by two men—tumbled mid-air down an aisle, briefly stopping to cling to a support beam before finally touching ground as she landed on the stage).

What transpires on the stage and its back walls too captures our attention. The movement, a mixture of the pedestrian and spectacular, was born from improvisation by Gotheiner’s collaborating artists and performers Ying Ying Shiau, Chelsea Ainsworth, Doron Perk, and Isaies Perez Santamaria in a research period for this work during which they retraced Kerouac’s first trip to the west.

These gorgeous dancers, along with the equally excellent Alex Biegelson, Jessica Smith, and William Tomaskovic, are present, natural, and relatable as they deftly segue between sumptuous, bold, vulnerable, daring, hip, desperate, and sexy qualities. Within a space smaller than many NYC apartment living rooms, they thrust their legs, spring through space, hold each other aloft, and fluidly revolve with a lower limb reaching skyward.

Gotheiner alters the movement language, shifts distribution and placement of dancers, and varies compositional techniques to distinguish each scene. In an early duet, what begins as a sexually charged relationship morphs into an internal struggle and a battle between characters. Later, with a moving image of a dark alley as their backdrop, two men vigorously brush their hands against their bodies. They dance in unison, but become increasingly out of control, as though under the influence. Later, a couple begins slow dancing until one dancer repeatedly falls with abandon; each time, and only just in time, her partner rescues her from harm.

Gotheiner’s choreography is enlivened by Higgason’s ever-changing video backdrop. At times, the video acts as a partner to the live performers. A dancer is shadowed by her onscreen doppelgänger; her doubled solo becomes a duet when she freezes but her digital twin continues.

Higgason includes direct visual citations from Kerouac’s tale—like a plate of diner apple pie and ice cream, or a multitude of scenes from and of the road. But his glorious footage also becomes more brilliantly abstract. Similar to the great video artist Bill Viola, he uses the elements as metaphor: like America’s land, its people, too, are solid (tough), liquid (flexible in spirit, vulnerable at heart), air (able to evade obstacles and transcend social constructs), and fire (destined to fall into harm’s way).

Occasionally, quotes from Kerouac float amid Higgason’s dynamic visual scene. As Biegelson tugs at his shirt, toiling with whether to disrobe, a group of naked people streaks across Higgason’s canvas. The line, “On the wall was a nude drawing of Dean,” materializes. The group skinny dips in a natural pond surrounded by red rocks. This and other scenes connect with and are inspired by Kerouac’s novel. But one need not have read Kerouac’s On the Road to be drawn in by ZviDance’s production. We can identify with the states of being—like fear, admiration, yearning, friendship, or struggle—that suffuse the work.

Toward the end of the piece, the dancers on the screen walk along train tracks in myriad ways—playfully, precariously, confidently, fearfully. Answering the question asked by a carnival owner in Kerouac’s On the Road—“You boys going to get somewhere, or just going?”—Gotheiner’s characters seem to be just going.

We are left to consider how we might spend our limited days. Do we strive to reach a finite purpose, or surrender to the unpredictability of each experience along our travels, allowing the process to be our goal?