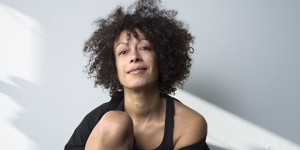 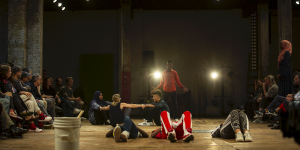 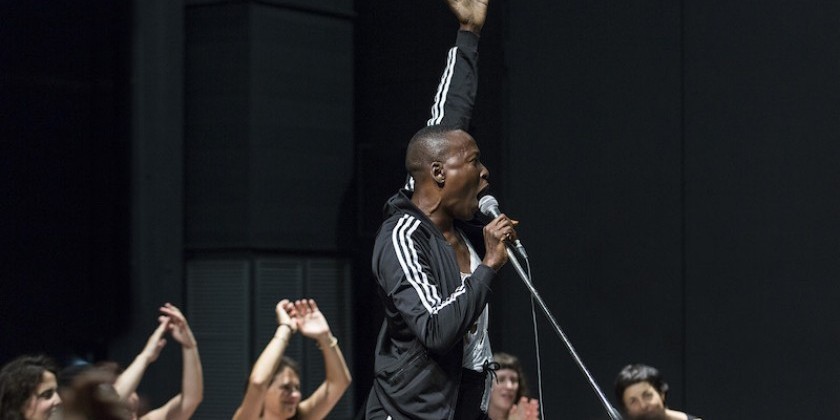 A U.S. Premiere and a Crossing the Line Festival 2017 Commission

nora chipaumire and fellow ruffian Shamar Watt present #PUNK, part one of a triptych that will act as a live performance album titled #PUNK 100% POP*NIGGA. This collection celebrates the ideologies of punk, pop, and rumba through the lens of radical artists Patti Smith, Grace Jones, and Rit Nzele.

“Is everybody here?” chipaumire asks as folks accumulate in the carpeted auditorium. Many settle in front of the raised stage, some trickle along the sides, and others convene on an elevated platform behind the performing space. chipaumire commandeers a microphone stand positioned downstage right. Watt occupies the mic stationed along the upstage diagonal.

Photo Courtesy of the Institute for Creative Arts

nora’s shrill screams pull her onto the tips of her toes in a wide stance. Watt and chipaumire repetitiously recite, “Put your hands together,” “Introducing an introduction,” and “Are you ready?” From beginning to end, these chants put the audience to work with little reprise. We are constantly confronted with statements and told to clap.

Between screams and proclamations, they announce and perform new dances like King Kong Jesus and London Bridges. They find momentous pauses and then burst into unison. Slow, undulating torsos float above circular hips. Thick, syrupy gestures explode into leg extensions and punctuated poses. Reggae and ambient soundscapes accompany the duet throughout. Their highly energetic performance propels our consciousness into melodic trance.

chipaumire relates a street conversation where someone yells to her, “Hey African, go back to Africa.” With every narrative repetition, she takes up more space, diving on and off stage. She proclaims, “Yes, I’m African, and I’’ll f**k with the past and f**k even harder with the future.”

#PUNK illustrates an environment beyond the archetypal space for white male youths. chipaumire claims her rights: to resist, to find joy in rage, and to misbehave. She holds space as an American, Zimbabwean, human, artist here to have fun.

She is defiant, uninterested in sitting on either side of your binary. Watch her go! Safely outside your box, she thrashes in sweat-dripping ecstasy.

The Dance Enthusiast Shares IMPRESSIONS / our brand of review and Creates Conversation.
Check out our other IMPRESSIONS here, and read our 2014 interview with nora.
Share your #AudienceReview of this show or others for a chance to win a prize. 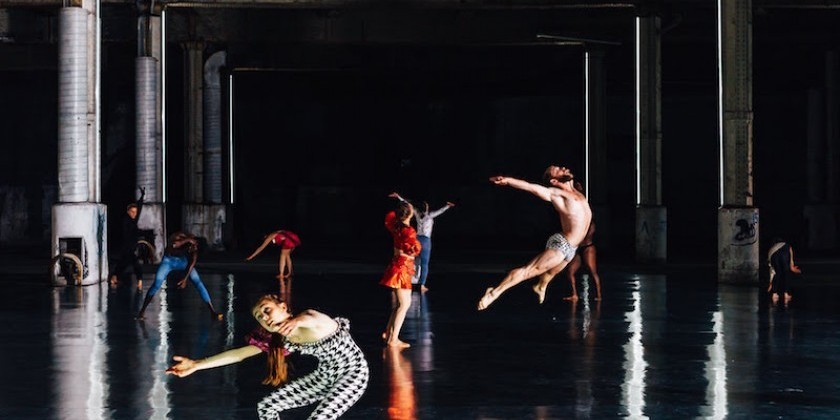