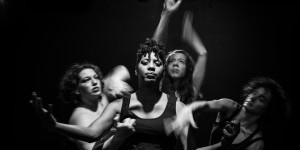 A serene underwater scene greets guests as they enter the theater at Gibney. Gurgling water sounds waft through the air and blue-green light illuminates bubbles pooling on the floor and rising upward. A tattered white linen hangs from the ceiling like a sail leftover from a shipwreck.  Soon, a naked torso emerges projected onto the cloth.  As the lights continue to transform the space into a deep-sea environment, choreographer nia love appears from behind the fabric mimicking the projection.

Part multi-media performance piece, part mobile site of study, g1(host): lostatsea grapples with the “afterlife” of slavery. Exploring themes of loss, geological debris, and generational accumulation, love questions what remains of the Middle Passage in her body. She traces a dense path with much to see and absorb.

Floating like seaweed, love’s arms waft and her torso drifts. Her movements appear primordial, resembling an organism discovering itself. From offstage other bodies drift in, weightless, perhaps ghosts of the drowned.

Projections on the floor, the sail, the back wall, and on randomly arranged fabric-covered rectangles (that look like cargo trunks) shift as the piece progresses. There are images of the earth, old photos of shirtless men posed as if they are products to be examined, pictures of Native American groups, and scenes of deep-sea diving. In these drifting images we see a history of accumulated loss.

At one point, performer Iquo B. Essien tells a traumatic story of childhood swimming lessons. Her teacher insisted that black people couldn’t float, planting a fear of drowning in the little girl. As Essien grew, this memory morphed into a question, “Is this why so many drowned during the Middle Passage as they jumped into the sea, attempting escape?”

Against a soundscape of crashing waves, clanging metal, and haunting cello music played by Nioka Workman, love dives through the spectered archives of her ancestral past. Deep under water, she asserts, all you hear are echos, everything else is timeless. love’s diving is both actual and metaphorical. Underwater images depict her dive into research.  Her cast of four dancers swim with her, illuminating parts of the journey.

Adapted from a solo, g1(host): lostatsea requires performers Lela Aisha Jones, Jesse Phillips-Fein, Veleda Roehl, and Essien to find their personal connection to history. And they accomplish this well. Their movements, at times tossed with abandon or pensively searching, create a feeling state. Most notable are their facial expressions — alive and emotive, shifting from fear, to reverence, to confusion.

In the debris recovered from her symbolic descent, love unearths the image of a child with the word “ships” taped to her forehead. love wonders if this little girl, a victim of one of the many hurricane’s in Haiti, knew she was bound for a ship to an unknown land. “This is why I dive,” says love.  Her descent is a way of confronting her ancestors’ trans-Atlantic passage as well as the passage of time. In the eternal space between the ocean’s surface love can meet, represent, and care for those who lost their lives.

love also takes time to speak of those who didn’t drown, but survived the torturous journey. Reading from a journal, she tells us the story of Phyllis Wheatley, a woman kidnapped from West Africa and sold as a slave in Boston. Wheatley went on to be the first African-American woman to publish a book of poetry and one of the best-known poets in America, transforming past pain into future possibility.

Towards the piece’s end, the covering on the rectangles placed around the stage is removed to reveal fish tanks filled with water.  Jones, Phillips-Fein, Roehl, and Essien dunk their heads in the tanks, hold them there for as long as possible,  then rise only to gulp air before plunging their heads back into the water. The effect, discomfort bordering on dread, serves as a reminder of the torture, trauma, and eventual fate of many.

Today, more than a century after the Middle Passage, love wonders where we stand.  How does history shape and influence us? Can one float in a country where kidnapping, enslavement, and subjugation has occurred? Is there still danger of drowning? love doesn't  answer these hefty questions: rather, pursuing this path, she creates an intriguing environment and a transformative space in which to reflect.