Nominations Announced for the New York Dance and Performance Awards - the Bessies.

By Cory Nakasue
View Profile | More From This Author

Nominations for the New York Dance and Performance Awards, aka the Bessies, were announced on July 18, 2012 at the French Institute Alliance Francaise in Le Skyroom-

The intrepid souls of the NYC dance community braved an angry summer storm that lobbed marble-sized hail to hear the nominations and celebrate an exciting season.

Of course the announcements opened with some dance from a couple of pint sized, or should I say emerging hip-hop artists. Lane Harwell, Chair of the Bessies Steering Committee and Lucy Sexton, Producer of the Bessie Awards followed with and introduction and opening comments.

An impressive range of styles, cultures and practices has been acknowledged by what seems to be a thorough investigation of all New York City has to offer—resulting in a more complete expression of NYC dance as exemplified in this year’s nominees.

This year’s list shows the Bessies expanding their horizons, moving beyond the downtown dance scene to include emerging artists that may have been over looked before and provide them with unique presentation and development opportunities. Read on and rejoice.- Cory Nakasue, The Dance Enthusiast, Associate Editor

The Awards: One Winner and Many Nominees


The New York Dance and Performance Awards, aka the Bessies, announces its nominees for the 2011-2012 season, as well as the recipient of the Juried Bessie Award, Souleymane Badolo.

"This years Bessies' nominees demonstrate the vibrancy and diversity of dance and performance in our city. The nominees show how the arts can lead us all through times of challenge and change," says Lane Harwell, Chair of the Bessies Steering Committee. "We are especially delighted to announce the Juried Award recipient and a new partnership with The New York State DanceForce to connect this emerging artist to venues and artists throughout the state."

The Bessies are pleased to announce the return of the Juried Bessie Award for its second year. The panel, Lar Lubovitch, Yvonne Rainer, and Jawole Willa Jo Zollar, has chosen to honor Souleymane Badolo as its 2012 recipient. The award is given to an artist who the jury believes is investigating some of the more interesting and exciting ideas happening in dance in New York City today. The honored dance maker will tour his work to regional theaters partnering with the Juried Bessie Award in the coming year. The Jury announced their decision on July 18, 2012 during the Bessie Awards annual press conference, held at the French Institute/Alliance Françiase (FIAF).

I am so very honored and excited to be this year's recipient of the Juried Bessie Award," says Mr. Badolo.

"Thank you to the Jury and thank you to the many people who have made this possible, including Nora Chipaumire, Reggie Wilson, Ralph Lemon, Jawole Zollar, Bennington College, and so many others.

I want to thank my dad and mom; they are not anymore in this life, but I know somewhere they are listening."

In speaking of their choice, the Jury said they were interested in the way Souleymane Badolo's work combines a number of different dance traditions, drawing on West African dance and making use of improvisation and experiment. As juror Lar Lubovitch put it, "Souleymane brings a unique history to his artistic point of view, and embodies it within a passionate physical language that can engage the viewer both intellectually and emotionally." The jury was also appreciative of the desire of the inaugural touring partner Nazareth Dance Festival to build and stretch its audience's view of the dance arts, and felt Mr. Badolo would be an excellent choice in that endeavor. In the words of juror Jawole Willa Jo Zollar, "I truly appreciate his commitment to innovation, ritual, culture, and personal narrative. He is the real deal."

Dancer and choreographer Souleymane Badolo is known for his contemporary interpretations of traditional African dance. He began his dance career at DAMA, and founded his dance company, Kongo Ba Teria in Ouagadougou, Burkino Faso in 1993; he has toured throughout Africa, Europe and North America. He has participated in DTW's Studio Series, Harlem Stage's E-Moves Series, and Dance Under the Influence at the Museum of Art and Design. In 2010, Mr. Badolo premiered a commissioned solo work, Yaado (Cemetery), for I Got Lost, Platform 2012 at Danspace. He teaches contemporary dance at Bennington College.

I am so very honored and excited to be this year's recipient of the Juried Bessie Award," says Mr. Badolo. "Thank you to the Jury and thank you to the many people who have made this possible, including Nora Chipaumire, Reggie Wilson, Ralph Lemon, Jawole Zollar, Bennington College, and so many others. I want to thank my dad and mom; they are not anymore in this life, but I know somewhere they are listening." Badolo, who could not be present at the announcement, recorded his speech in both English and French for the occasion."

The Nazareth College Arts Center Dance Festival was the inaugural touring partner for the Juried Bessie Award. Beth Gill, the 2011 award recipient, is currently performing at the 2012 festival at the Nazareth College Arts Center in Rochester, NY. Nazareth College President Daan Braveman says, "We are proud to have served as the inaugural touring partner for the newly established Juried Bessie Award. The Nazareth College Arts Center has a long history of presenting dance companies on our stage. It is an honor to partner with the prestigious New York Performance and Dance Awards and play a role in introducing emerging choreographers to the cultural community here in Rochester, NY. Our audiences have enjoyed seeing Beth Gill's Electric Midwife this week as part of our Summer Dance Festival, and we hope that Gill's experience here has been a rewarding one. We look forward to welcoming the recipient of the 2012 Juried Bessie Award next summer."

Final Works for Each 2012 Award Category- And the Nominees Are: 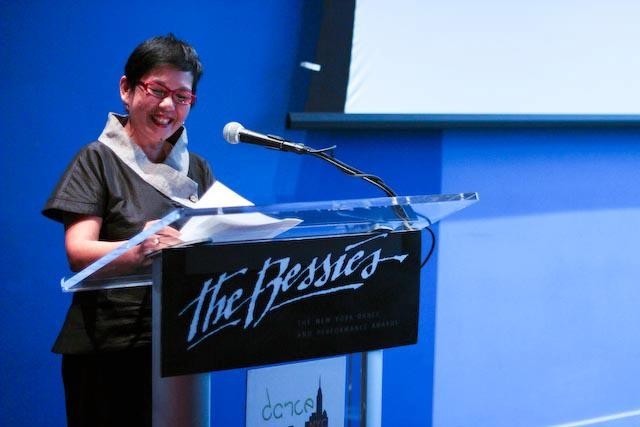 Outstanding Production (of a work not technically considered dance but happening in and influencing dance in New York):
- The Rehearsal by Cuqui Jerez, performed at Performance Space 122, and the French Institute's Crossing the Line Festival at the Performing Garage
- Big Girls Do Big Things by Eleanor Bauer, performed in Perfoma 11 at New York Live Arts, and in American Realness at Abrons Arts Center
- The Thank-you Bar by Emily Johnson, performed at New York Live Arts

Outstanding Performer (of a work performed in a larger capacity venue of more than 400 seats):
- Shantala Shivalingappa in Swayanbhu by Shantala Shivalingappla, performed in World Music Institute at the Skirball Center for the Performing Arts
- Silas Riener in Split Sides by Merce Cunningham at the Brooklyn Academy of Music
- David Hallberg for his work with The Bolshoi Ballet and American Ballet Theatre

Outstanding Performer (of a work that stretches the boundaries of a traditional or culturally specific form):
- Dormeshia Sumbry-Edwards for sustained achievement in performance, and her work with Jason Samuels Smith at the Joyce Theater
- Gianne Abbott in Brazil! Brazil!, performed at the New Victory Theater
- Jessica Alejandra Wyatt in Asuka by Eduardo Vilaro, performed by Ballet Hispanico at the Apollo Theater

Outstanding Performer (of a work performed in a smaller capacity venue of less than 400 seats):
- Omagbitse Omagbemi for sustained achievement in the works of Keely Garfield, Ralph Lemon, David Gordon, Urban Bush Women, and many others
- Ryoji Sasamoto in Glowing by Kota Yamazaki, performed at the Japan Society
- Silas Riener for sustained achievement in the works of Merce Cunningham and in NOX by Rashaun Mitchell

Outstanding Performer (of a work not technically considered dance but happening in and influencing dance in New York):
- John Fleck in Mad Women by John Fleck, performed at La MaMa
- Emily Wexler in Mad Heidi by Yvonne Meier, performed in American Realness at Abrons Arts Center
-Nicole Mannarino in Devotion Study #1 by Sarah Michelson, performed at the Whitney Museum

Congratulations to the Nominees!

Lucy Sexton is the independent producer of the Bessie Awards. A choreographer, director, and producer, she has worked in the field of dance and performance for more than 25 years. Highlights include creating the dance performance duo DANCENOISE, directing the off-Broadway play Spalding Gray; Stories Left to Tell, and producing Charles Atlas's film The Legend of Leigh Bowery. Please contact her with any questions about The Bessie Awards: thebessies@gmail.com

The Bessies are produced in partnership with Dance/NYC,
a branch of the national dance service organization Dance/USA
www.dancenyc.org/bessies

About the Bessie Awards

The Bessies will take place on Monday, October 15, 2012 at 8:00pm at the legendary Apollo Theater in New York City. The 2012 ceremony will mark The Bessie Awards' second year at the Apollo Theater.

The mission of the Bessie Awards is to gather the city's many dance communities, to honor outstanding work in the field of dance, and to advocate on the national and international stage for the extraordinary range of dance being performed in New York.

Established in 1983 by David White at Dance Theater Workshop, the New York Dance and Performance Awards or Bessie Awards-in honor of the treasured dancer and teacher Bessie Schonberg-acknowledge outstanding creative work by independent artists in the fields of dance and related performance in New York City. They honor exceptional choreography, performance, music composition, visual design and others areas of dance and performance. The award recipients are chosen by The Bessie Selection Committee, which consists of artists, dance presenters, producers, journalists, critics and academics

Dance On Camera Festival 2014 at the Walter Reade Theater

A Day in the Life of Vangeline Theater