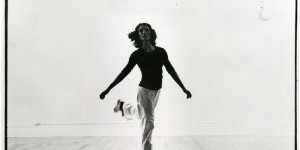 Pictured above: Rose Marie Wright, Twyla Tharp and Sara Rudner in The Fugue at the Roundhouse in London, 1974. ©Tony Russell

The Dance Enthusiast recently had to the opportunity to speak with artists from the Stephen Petronio Company, Tanztheater Wuppertal Pina Bausch, and Twyla Tharp Dance. This season, these dancers are tackling roles created and performed by three dance icons: Pina Bausch, Steve Paxton, and Twyla Tharp. Over the next few weeks, we'll share their rehearsal experiences and the ways they navigate the pressure of living up to these individuals’ legacies.

Twyla Tharp Dance is mixing the old with the new during its Joyce season (September 19-October 8). Along with the premiere of Dylan Love Songs, the illustrious choreographer is bringing back two gems from the 1970s: The Raggedy Dances and The Fugue, the latter of which derives its rigorous form from Bach’s "The Musical Offering." Originally performed by Tharp, Rose Marie Wright, and Sarah Rudner, The Fugue was the first work intended to become a piece of active repertory. This season, dancer Kara Chan will perform Tharp’s role. For details, go to www.joyce.org.

The Dance Enthusiast: What was the rehearsal process like for The Fugue?

Kara Chan, Twyla Tharp Dance: There isn’t music in this piece, so it takes a tremendous amount of focus. Twyla encouraged us to hear and visualize the rhythm in your mind’s eye before you execute it.

TDE: What types of things would Rika [former Tharp dancer Rika Okamoto restaged the work] and Twyla share to help you in the process?

KC: There’s a section we call push and pull, which has movement similar [to] and inspired by boxing punches. Twyla would remind us that these movements, ‘are core-initiated punches,’ requiring resistance and tension. She would say, “Don’t go to your opponent; bring them in. There needs to be an active drawing in of the punch. Focus outward on the target.” Her point being a punch is much more than just the throwing of an arm out into space.

In contrast, there is a phrase we call ‘mush,’ which has movements bleeding in transition from one another. Twyla would say, “Think of melting joints, melting chocolate” and “Dissolve from the high point to the low point.”

TDE: How is this process different from others that you’ve experienced?

KC: The Fugue is based on a 20-count theme, and the whole piece explores 20 variations on that one theme. At first, Rika wouldn’t tell us the steps. We had to discover the different variations by learning the retrograde of the movement and the inverted form [i.e., whatever is front is now back, whatever steps were on the right leg are on the left] of the phrase . . . There was a lot of mental work as a dancer to figure out the different ways how this one phrase can be varied and explored . . . It’s a piece that I can’t compare to another that I’ve done before. There’s a mental resiliency and attunement to command the movement. It’s a great challenge, and I feel lucky to be in this process.

Twyla Tharp in The Fugue at the Delacorte Theater in 1971. © Milton Oleaga

TDE: You’re dancing in Twyla Tharp’s role in The Fugue. What is it like to dance in the shoes of a dance icon like Tharp?

KC: I remember what Twyla told me during the process: I shouldn’t try to be her. As it is a revival, I need to instead find myself within the role. Yes, it’s important to emulate and make sense of her original movement tendencies and replicate it to the best of my ability. But, in the end I must own the movement as if it were my own. I guess that is the challenge of doing any kind of repertoire.

With a work like The Fugue, there isn’t a sense that you’ve mastered it. There’s a constant pursuit of being clearer and in command of the movement. “You are in command of The Fugue; The Fugue is not in command of you.”

This is a direct quote from Twyla. The intention being we must own the movement and not allow the difficulty of the steps to overtake us. We know the movement inside and out, and must take responsibility to be in control of it.

For more on Tharp, read Sara Rudner's feature and Impressions of the company's 50th anniversary tour.