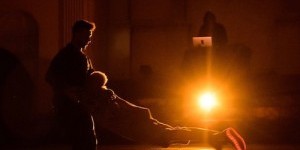 Published on December 4, 2018
"Too Many Bodies." Photograph by Daphne Wu.

Directed by Reena Dutt and choreographed by Nancy Dobbs Owen to "Place Called Us" by Alex Mackey, “Too Many Bodies” began as a music video but evolved into a website outfitted with resources for victims, loved ones, family members and activists against gun violence. "Too Many Bodies" aim to help Americans find resources for:

If you would like to become more active in the fight for common sense gun laws seek support for the repercussions of gun violence in America, visit www.toomanybodies.org

Sammi Lim for The Dance Enthusiast: Where did you build your dance chops?

Nancy Dobbs Owen: I started out in the ballet world, training on a scholarship in the Bay Area with Richard Gibson and Alonzo King, before heading to New York as an apprentice with the Joffrey Ballet.  I then danced regionally with ballet and modern dance companies for a few years before joining the first national company of The Phantom of The Opera as a ballet corps member and as Meg's cover. As a dancer, I alternate between company/concert dance and theater. Since I am now based in LA, [I do] TV and film. I started working as a choreographer when I moved to LA, and joined more collaborative companies, which allowed me to find my voice. Stylistically, I adhere pretty closely to my ballet roots, but always lead with story.

The Dance Enthusiast: Do you watch American Horror Story, by any chance? [Spoiler alert] The scene in the first season where Tate goes on a killing spree at his high school was so horrifically realistic that I had to look away. Though dealing with the same harrowing topic, “Too Many Bodies” does what art does best, that is, to make hard, cold facts approachable. Thoughts?

Nancy Dobbs Owen: Thank you for that! Our Director Reena Dutt, with whom I collaborated very closely, had a very distinct vision of what our story was and was quite clear that we did not want to show any actual violence. This piece is not designed to shock or to hurt the viewer in that way, but to start a conversation. You can't do that if you can't watch it. We wanted survivors and family members to be able to watch it and use it to open up conversations that are too traumatizing or difficult to approach on their own. I believe art can elevate. We can tell a story, especially as dancers, without being literal.

The Dance Enthusiast: What is your measure for excellence when it comes to creating dances?

Nancy Dobbs Owen: Well, I'm a bunhead, so those feet better be pointed! But seriously — though I do treasure technique, the story is of the utmost importance. The dancers' commitment, adherence to music, use of space, and creation of a message that stays with you after the piece is over are all paramount. It is harder in this medium of film. Often you do your work with a specific vision and idea and then it is edited into something that you don't recognize! The process on this video was so collaborative. Since the director, editor and I were all producers as well, we were in the conversation throughout the editing process, which was a gift. My final gauge of excellence asks: how does it land on the audience? Are they receiving the message or story? Are they touched? In this particular case, are they moved to take action? If they are touched and the answers to those additional questions are yes, I feel good about what I have created.

Mia Lind and Malcom in Too Many Bodies. Photo © Daphne Wu. Visit www.toomanybodies.org for more info.

The Dance Enthusiast: Did you conduct any research prior to choreographing the music video? Describe your modus operandi.

Nancy Dobbs Owen: I usually conduct a lot of research, especially when choreographing for theater. I always want to honor what came before while making the choreography fresh and unique. However, for this particular video, I did not spend a lot of time watching other videos or choreographers. I wanted to work with the dancers' personalities and to really create a world where they were clearly identifiable. My assistant Sherri Gonzalez and I spent a few days in a studio mapping out phrases and creating vignettes based on the walk through of the set that Reena and our DP Daphne Wu created. We then had two full days of studio rehearsals. We let the dancers play around with the phrases to see if there were slight changes that would personalize the movement more. Because I knew all of the dancers well, changes were pretty minimal.

The Dance Enthusiast: How did “Too Many Bodies” evolve from a music video to an entire support platform?

Nancy Dobbs Owen: We always knew we wanted to end the video with a call to action. We decided to create the toomanybodies.org website when we were researching websites to add at the end of the video, as we discovered that there was no single place where everything — survivor resources, voter registration and activism websites — was placed together. This led us to reach out to many organizations, including NoRAnow and Survivors Empowered and we decided to create our own. Toomanybodies.org leads the public to established organizations specializing in each action item. We have met so many amazing, impassioned people working to create a safer world. The most recent addition to the community is the education and healing workshops that we are developing with Nurjahan Boulden who is collaborating with me on transforming her healing workshops for shooting survivors into arts workshops that we can bring into schools to address pain before it erupts. All of this is a direct result of community building, which is so desperately needed to address this issue. Violence is a cycle and unless we attend to the issue from all angles, it’ll continue to be a cycle.

The Dance Enthusiast: Which high school served as the set for the music video?

Nancy Dobbs Owen: We actually filmed on the set for the show "Teen Wolf." The EP of the show donated the set for the shoot day, and came to the shoot to root us on! We are indie filmmakers and the generosity of the film community in helping us create this video was astounding. The dancers were very excited to be on the set and were a little star struck!

The Dance Enthusiast: What was the most challenging aspect of this project? Did 'feels' get in the way?

Nancy Dobbs Owen: The most challenging aspect is the most mundane: time and money. We would have loved to spend more time shooting, but the reality is that we had one day and we had to make it work. As for emotion, I wouldn't say that feels got in the way, but there were definitely tears! The hardest scene to work through was the counselor's office. It was the first scene that I worked on with the dancers. Michelle, our teacher, is a mom and both of the dancers used to be my students. Many of the dancers in the video, all professionals now, graduated from AMDA College and Conservatory, where I am on faculty. To see them on the floor... it brings me to tears now. Michelle needed some time to work through the reality that those two girls could be her daughters. Even without violence and the fake blood, the sight of a young person silent and prone on the floor is heartbreaking. The two hardest scenes on set were the counselor's office, including Alexandria coming out of the closet, and our shooter Matthew (who also graduated from AMDA) sitting on that staircase. He was so heartbreakingly alone. There were many moments when the entire crew was in tears. Emotion was high, but never got in the way.

The Dance Enthusiast: What’s next? How does one take the music video’s message further?

Nancy Dobbs Owen: This video is meant to start conversations. The ambiguity of the story, the quietness of the music, and the space at the end are all meant to engage with and to invite people in. We want it to go viral. We want people to use it: in workshops, with their parents, with their friends to say, "This issue is important to me, what can we do?" We are giving them a bit of a map. We believe that the current generation of youth is going to make their voices heard, and we want to give them one more tool to make that happen. We invite any and all organizations advocating for a safer environment to use this video. Screen it at events, discussions, community gatherings. We invite you to use it, and to let us know! We want to know who our allies are and support them as much as we can.