Ranardo-Domeico Grays, Artistic Director of VISIONS Contemporary Ballet on Finding Clarity After Cancer and the Healing Power of Dance 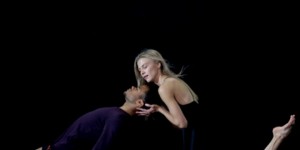 Las Fridas returns for a limited New York engagement in January 2020 after its November 2019 run sold out five performances. The 60-minute duet is inspired by the life and work of Mexican painter and revolutionary, Frida Kahlo. This season, the audience has the opportunity to experience the surreal 60-minute work in an intimate setting with limited seating: Mark DeGarmo Dance Studio Theater 310.

A numerologist once said that the number 16 symbolizes an aching for wisdom. Is this a theme in Las Fridas, which is made up of 16 sections?

Mark DeGarmo: The mandala structure of Las Fridas is reflective of the fundamental dualities inherent in Mesoamerican cosmology, such as life and death, sun and moon, female and male. The work emerged over 6 years and continues to grow, evolve and ripen. It is a living organism. Through the work’s developmental logic and my artistic process emerged 16 sections over 2 parts, again a dyad and duality. What pleasure I had witnessing its birth! 16 sections were inevitable considering the work’s and its subject’s layered, multiple themes, threads, images and connections. There are inexhaustible sources of interpretation embedded in Las Fridas and the title suggests that we are all Frida: the performers, the public, and ex-voto projections of deceased participants from another time. 16 is a mystical number across cultures and human experiences. It was an informed artistic choice. Other mystical numerology and incidents are embedded throughout Las Fridas and the artistic process, now over a decade in practice and over 30 years in gestation, has arrived at this moment in its performative history as a work of art.

How many venues has Las Fridas graced?

We performed it in November in New York as "An Offering for the Days of the Dead" in our newly launched Mark DeGarmo Dance Studio Theater 310 at The Clemente Soto Vélez Center. Our space, owned by The City of New York, is a 600 square-foot multi-use studio, office, archive, board room, and now studio theater in Manhattan’s Lower East Side. Over the past 10 years we have presented Las Fridas in three spaces at the Clemente: two were our studios during MDD's Salon Performance Series, Clemente's Open Studios, and Cutlog/Paris Art Fair, and also in Flamboyán Theater as a Clemente-Mark DeGarmo Dance co-production. During its 6-year initial development we showed the emerging work regularly and I facilitated audience responses to gather creative feedback data on how the work was perceived and received by various publics from New York, the U.S., and internationally, including Mexico, of course.

We also showed the first half for the New York Public Library, my bull solo for Booking Dance Festival at Jazz at Lincoln Center, and other excerpts at 92Y's Mexico Dance Festival, Ailey Studio Theater, and in New York State’s Hudson Valley. We are currently actively booking for 2020-2022 “Las Fridas,” including the U.S., Mexico, and elsewhere internationally. I originally envisioned the work as a miniature with its tiny Casa Azul/Blue House set to be viewed in close proximity so the audience could viscerally feel and connect with the work on a subliminal level. However, it has evolved as a work appropriate for larger venues as well.

What about Las Fridas make it such a 'portable piece'?

Mark DeGarmo: Its small cast is the obvious reason why it is a portable piece. Fridas is a live duo and our production team includes a sound and a lighting director. A week of shows with 3 totally different casts includes 6 performers: 2 female, 2 male, and female/male. We are planning its premiere in Mexico this May and touring Mexico after that.

The set is simple and inexpensive to construct on site with local artists, designers and architects to further engage audiences. As a movement installation and offering, integrating the spirit of local people, materials, and artists in various places with their unique geographies, histories, and contexts into this physical set is part of the concept that we are all Frida, part of Frida, and can access those traits of Kahlo we might need to understand, cope with, and enjoy our lives and what life deals us, whether blows or  kisses, ugly or beautiful, expected or out-of-the-blue. We can travel lightly with this work.

Your dress is a garland of dahlias next to Mark's rather somber suit. Which happens more in the dance? Juxtaposition or synchrony?

Marie Baker-Lee: I think it’s juxtaposition. I don't feel we're synchronous all that much and our relationship in almost every section is different. We're acting independently, but together.

Tell our readers a bit about the characters you play.

Marie Baker-Lee: We're both performing aspects of Frida Kahlo. She was a very complex woman with many sides to her. I'm portraying a tiny little bit of her in each performance that I can't even really put into words.

I think that she was a brilliant artist and I am constantly moved by her history, which was challenging in so many ways: medically, psychologically, being born into a fairly well off-family but seeing a lot of really difficult hardship starting with the accident, her polio, her husband having other lovers, and a lot of upheaval throughout her life.

Do you feel like you've grown into your roles or see the work differently since you started performing it  years ago?

Marie Baker-Lee: I think that my performance has grown since I started performing Las Fridas 8 years ago. On the one hand, it's familiar because I've been performing the same role. But on the other hand, I feel that each night brings a new dimension to my performance and my connection with the piece.

Mark DeGarmo: I was thrown by circumstance into the role 4 years ago. One week, minus a 24-hour food poisoning episode, informed my thrusting into the part due to the medical emergency experienced by one of the women with whom I had worked, created for and directed for 6 years. Instead of cancelling the debut New York preview with all of its advance publicity I assumed the role of Light Frida on the advice of my sound designer, composer Judith Sainte Croix.

Once again, by circumstance of the times, in 2020 at the opening of a new year and decade, I feel thrown into an examination of the present socio-political context. "Welcome to the arena" seems an appropriate tagline. As a professionally trained, Juilliard School Dance Division graduate, my life’s work includes continually mining the role for the depth of its expression and ongoing learning I experience as a dancer, musician, actor, performance artist, and performer. Light Frida is one of the greatest roles I have ever had the honor to embody and bring to the stage. I am continually learning and hopefully growing through this experience. As you know, the only constant in life is change. Movement is both life and cognition or thinking itself. Movement discovery launched the work and continues in our evolving practice and performance, which are a lived and living phenomenology. We bring the tacit and the implicit to our explicit presence for public witness and viewing. I’m curious how the public sees the work’s evolution and changes within we who are performing it.

Do either of you paint or dabble in fine art?

Mark DeGarmo: I create bundles that are soft assemblages of fabric, feathers, medal, totems. I also create an annual personal offering for the Days of the Dead, which include my November 2nd birthday. I dabble in landscape design.

What do Kahlo's paintings say to you?

Marie Baker-Lee: To me, Kahlo's artwork is both very inspirational and very sad. I feel a lot of her torture and her pain when I look at some of the paintings and I'm doing what I can to truly portray that in my performance.

I identify with her connection to nature and the natural world. It reaffirms my own connection, and our human connection, to that. Even when I'm constantly surrounded by skyscrapers and technological devices, I'm looking at the birds and trees, the weeds in the sidewalk, the gravel and dirt and the people around me. I think she showed a lot of that in her paintings.

Mark DeGarmo: Kahlo's work is primordial, confrontational, unflinching. They say Mexico to me. And they say Frida. It feels miraculous to witness such astonishing genius. That is why I call her a secular saint. Especially for all artists.

If you could say something to Diego Rivera, what would it be?