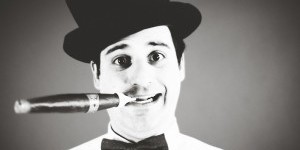 Impressions of Jeff Seal and The Raving Jaynes

The Dance Enthusiast Asks The Raving Jaynes and Jeff Seal

As They Embark on a Side-Splitting Show at Triskelion Arts

“They’re hilarious when they're ‘on’, endearing when they're not, and both irreverent,” says Triskelion Arts Artistic Director Abby Bender. “They border on being just offensive enough to make us laugh with them (and sometimes even at them).”

The Dance Enthusiast met with The Raving Jaynes (Amy Larimer and Jamie Graham) and Seal to talk about what makes them laugh, how they practice comedy, and what it means to fail in performance.

Trina Mannino for The Dance Enthusiast: Raving Jaynes, what sparked your interest in fusing dance and comedy improv? What are its challenges?

Amy Larimer: I thought it would be interesting to combine the two forms to bring more body in the comedy improv and bring more story to the dance.

Jamie Graham: Often, when we first began this process, we would find ourselves in scenes more than in dances, because language is powerful. Keeping the balance between them is tricky.

AL: We have to constantly ask: How does dance fit into the literal narrative we’re trying to tell? How literal do we need to be? We also explore moving abstractly in a way that still supports character development.

TDE: Jeff, how did you arrive at wanting to do comedy and physical theater?

JS: I’ve wanted to do comedy since I was very young. I started taking improv classes in high school…I used to watch old vaudeville stuff. You realize when you’re watching clips of Groucho Marx, Buster Keaton, and Charlie Chaplin that they have similar ways of moving. You can tell it came from their experience in vaudeville and performing in music halls. I found dance through clowning, but I would not call myself a dancer out of respect to actual dancers.

TDE: How are your upcoming premieres different from your previous work?

JS: For the first time, my process has been to sit down and write. Normally, I go to a studio with other people, and we create material on our feet.

I’m struggling with the thought that I’m more funny in life than onstage. I’ve done a lot of clowning, which is about being yourself and being vulnerable. But I still feel that it’s not 100% me. This show is about stripping away everything I’ve been trying to do for several years and going onstage with no theatrical artifice and proclaiming ‘This is me. These are the things I talk about when I’m drunk at a bar. But right now I’m neither drunk or at a bar.’

AL: In the past we’ve taken suggestions from the audience to get started, but we’re not going to do that for this show as a way to see if it really can come from the body.

We’re excited to have a real theatrical experience rather than coming out on a stage about the size of this table. Though we’re doing improvisation, it’s important that we have a trusted technician – like Andy [Dickerson] at Triskelion — because they ultimately call our end.

TDE: In comedy, sometimes the material falls flat with the audience. How do you navigate that possibility in performance?

JG: What’s difficult is that there are many ways you can fail. You can fail if nothing is happening to move the story along, or you can fail if there appears to be constant conflict. Usually, that manifests in fights. One show, we were [pretending to be] boxing the entire time.

JS: You know, comedy is failure. If you’re having fun, even in the failure, and you acknowledge something didn’t work, the audience will often be on your side. But, if you try to brush it off like it didn’t happen then they’ll stop trusting you.

The Raving Jaynes (Jamie Graham in front and Amy Larimer in the background); Photo by Mathieu van den Berk

TDE: The late Christopher Hitchens was lambasted for writing an article asserting women aren’t that funny. Amy and Jamie have you experienced any challenges being dance-trained females in the comedy world?

JG: Sometimes we get: “So you’re the novelty act?”

AL: We talk about whether we need to “prepare” the audience for what we do or can we just go out there. Our brand of comedy works to our advantage and disadvantage. Some people really love it while others may say, “you move really well, but you could work on…” [She impatiently snaps her fingers.]

I think that women aren’t encouraged to be funny in our culture. We have to recognize the times when we hold back socially or in an improv class. I think that’s more stemming from socialization than from people or performers around us.

TDE: Who or what makes you laugh?

JG: I feel the same way about you! I also think that the big cosmic joke — the absurdity and futility of everything — is funny. Amy and I really like the sacred and profane.

JS: I like comedians who you just look at and they make you laugh. They’re not necessarily saying clever jokes. It’s just who they are is funny.

To see someone transgressive to the point of knocking another person back into place can be satisfying. Once you put something through the grinder of comedy, it’s not the same afterward. Comedy can serve as an equalizer.