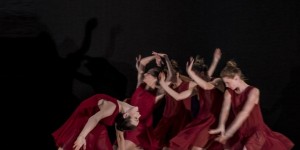 Pictured above: Alessa Rogers and Christian Clark in rehearsal for Liam Scarlett's Vespertine

Gennadi Nedvigin took over the artistic direction of the Atlanta Ballet in August, only the fourth person to hold that post in the troupe’s 88-year history. The Bolshoi-trained Nedvigin, who is 40 but looks half his age, came to Atlanta from the San Francisco Ballet, where he was a beloved and much-lauded principal for 16 years. As a dancer, he was known for his light jump, versatility, intelligence, and sensitive partnering. After accepting the directing job in Atlanta, Nedvigin, still in peak form, announced his retirement from the stage, a decision that took colleagues and fans by surprise.

Nedvigin, who speaks with a gently lilting Russian accent, is now passing on everything he knows to Atlanta Ballet’s 24 members, who benefit from his vast knowledge and his textbook-perfect demonstrations. He has enjoyed a superstar’s welcome from the city of Atlanta, garnering attention far outside the dance world. He’s unfazed by all the fuss and still considers the studio his most-natural element. Beginning March 17, Atlanta audiences will get a taste of where Nedvigin is leading the troupe in a program called Gennadi’s Choice.

The Dance Enthusiast recently spoke with Nedvigin about this program — the first one he has crafted for the company — and his plans for the future.

For tickets to Gennadi’s Choice, which runs from March 17 to 19, go to the Atlanta Ballet website.

Nicole Dekle Collins for The Dance Enthusiast: For the Gennadi’s Choice program, you’ve selected a diverse mix of ballets, pairing selections from Paquita with a recent work by Liam Scarlett and a new ballet commissioned from Gemma Bond. Why did you choose this combination of works?

Gennadi Nedvigin: I think it’s important for the Atlanta Ballet to perform works in all styles: classical, neoclassical, and contemporary. That’s the model that guided my approach to choosing this program.

I was trained at the Bolshoi School, the best training you can receive as far as purely classical dancing. After graduating, I danced with a company in Moscow, then I traveled, moving West: I danced in Paris for a year [at the Jeune Ballet de France], then I moved to San Francisco, where I was exposed to a variety of choreographers and styles. That’s how I grew as an artist: I started from this pure classical base, and then I moved on, adding layer upon layer, like on a cake. [In this way] you become a very versatile dancer. At San Francisco Ballet, in addition to the new works and the large Balanchine repertoire, we always had classical ballets. [Performing them] gave us a routine of perfecting [our classical technique], keeping it alive within us. And then we would jump into contemporary works. I think this is a good model.

Another reason I programmed such a mix of works is to allow us to expand our audience. If you go only one way, you are reaching only part of the community. I want to bring something to everyone, and I think this program will leave most of our audience excited and wanting to see more.

TDE: Why choose selections from Paquita for your first staging of a 19th-century work? Did you perform it at the San Francisco Ballet?

GN: Yes, we danced Natalia Makarova’s version at San Francisco. It’s a ballet I first did when I was in school at the Bolshoi, and I danced it at every company I was in. I chose it partly because it gives me a great opportunity to work with the majority of the female dancers in the company.  Also because it’s so purely classical. In staging Paquita, I have a chance to work with my dancers closely, perfecting even the smallest details, and the small details are so important in classical ballets. Working closely with my dancers on this ballet, I can grab the bull by the horns and start working on the classical dance side. The classical ballets are the hardest to do.

TDE: Gennadi’s Choice features a new ballet choreographed by Gemma Bond, a member of the corps at American Ballet Theatre who has been presenting her own choreography during the off season for a few years now. Why did you choose Bond for your first commissioned work at Atlanta Ballet?

GN: I saw some of Gemma’s works and got in touch with her, asking if I could see a bit more. Learning about her [choreography] through those works, I could see her progression. She has reached a point where she’s ready to step up and create her first commissioned work for a professional ballet company. We are the first ones to give her the opportunity to create a new work on a professional company. I’m very proud of her creating it here. I am really, really satisfied with the final product. More than satisfied. I’m excited. You take a risk with any commission. Even with well-known choreographers, you never know how it’s going to turn out. Not every work is a 100 percent success.

Gemma’s ballet, called Denouement, is very interesting and beautiful. The music is by Benjamin Britten, a piece for piano and cello [Sonata in C, Op. 65], which will be played live. Bringing live music to all performances of Atlanta Ballet, not just for The Nutcracker and two of the repertory programs, is something I’ve really pushed for. We’ll also have live music for Yuri Possokhov’s Firebird in April.

TDE: How did you choose Liam Scarlett’s Vespertine? Scarlett made it for the Norwegian National Ballet, didn’t he?

GN: He did. It premiered in 2013. I knew I wanted to have one of Liam’s ballets in the season. I went through a few options, but Vespertine seemed the best fit. First of all, it fit the budget; second, it had the perfect number of dancers that would allow us to have two casts in which pretty much the whole company would be onstage, giving everyone a chance to perform. Also, it’s a beautiful work.

I first met Liam when he was 27. We worked together on two ballets in San Francisco: Hummingbirds and, just this last season, Fearful Symmetries. I could see in Vespertine similarities to both those ballets: There is a lot of excitement in the ballet, a lot of sensual movement, beautiful choreography. The ballet starts from little [simply] and then opens up like a flower as the darkness falls on us. That’s what “vespertine” means: something that opens up at night.

TDE: Do you have time to teach company class?

GN: When I was named director, I was hoping to teach company class twice a week and spend as much time as possible in the studio. Unfortunately, that hasn’t been possible, but I make sure I can teach class once a week, so that I stay connected with the dancers. It’s important to feel them, to exchange the energy, in a way. And I have so much to share. The time I spend with dancers in the studio, that’s when I forget about everything outside. In the studio, you go back to your “normal mode” the life you were living….

GN: Actually, I started when I was five — but not professionally!

TDE: Did your parents dance?

GN: No, we’re from a small city in the south of Russia. My mom, like pretty much any mom, would have loved to be a ballerina, but she had two sons. So the sons were sent to dance. And we fell in love with it.

TDE: San Francisco Ballet last year created a farewell video for you. Watching it, I was struck by how wistful Helgi Tómasson [SFB’s longtime director] and your colleagues seemed when discussing your departure, and by their surprise at your decision to retire from dancing. Is there any chance you might perform in Atlanta?

GN: No. When I applied for this job, I knew I had to decide what I was going to do: Direct and dance? Dance occasionally? Or not at all? I decided that it doesn’t work doing both because it’s really hard to stay in shape on the level I want to be. Every dancer is a perfectionist; we don’t want to perform halfway. So I decided I would step down from a dancing career and fully concentrate on the artistic director work. Directing requires a lot of time. There are a lot of different things you need to address — some of them artistic, some of them not artistic — and you can’t be in two places at the same time. As a perfectionist, I want to succeed in this new career, and I want to do it well.

TDE: I’ve heard that you come with your daughter to the Saturday Mommy and Me class at the Atlanta Ballet’s school. ….

GN: Yes [laughing]. I have a three-year-old daughter, Mila. She turned three recently, actually. Mommy and Me is for two-year-olds, so now she goes to class by herself. But, yes, before that, I did bring her to class.

TDE: I heard, too, that there were lots of people in the hallway outside the studio looking in ….

GN: Is your wife a dancer as well?

GN: No, she’s not. We’re keeping it healthy in the family.

TDE: One of the San Francisco principals has said that the dancers there called you “the machine.” Why is that?

GN: My peers, also my friends, would say, “Gennadi is like a textbook. He carries it in his pocket, and when you need to do something, he opens the book, reads how it’s done, and then he does it.” In a way, I can see it: Sometimes when a combination was given, I would almost freeze and think through what you need to do in the air, or how you would do the step. I would imagine it, and then I would do it. Maybe gymnastics gave me the idea that I could see the movement and then be able to replicate it. Visualizing it and then copying it. That’s also what I use in the studio with my dancers here at Atlanta Ballet, because I am still capable of doing things. Sometimes you say so many words [to explain how a step should be done] and nothing’s happening. But you show it once, and it would come. …

So maybe that’s why the dancers in San Francisco referred to me that way. Jokingly, of course. And if it doesn’t work, I am like, “Well, I’m rusted. Need oil change.”

TDE: Is there anything else you want to tell me?

GN: I’m very excited to be here in Atlanta. I met the dancers for the first time when I came to stage Yuri Possokhov’s Classical Symphony. That affected a lot my decision to apply for the job. And Southern people are very welcoming. I’m happy to be in this city, sharing all I have with the dancers, with the community. Bringing more people who love the ballet, and bringing more people who don’t know ballet yet and making them love it as well.