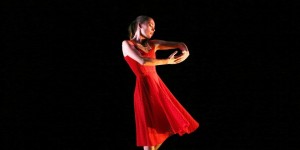 BalletNext will perform 4.0 as part of APAP on January 6-8th at Peridance. Michele will also be featured in the upcoming documentary film Expecting, a profile of fitness during pregnancy.

After a highly decorated career as a principal dancer with American Ballet Theatre, Michele Wiles became eager to push past choreographic boundaries in the world of ballet.  She created her own company BalletNext to create movement that utilized improvisation and new forms of collaboration while maintaining a classical aesthetic. After more than five years, her company has had seasons at both the Joyce Theater and New York Live Arts, and will present a new work 4.0 at APAP this January at Peridance. TDE had an opportunity to speak to Michele about her company and her newest upcoming role – motherhood.

Stacey Menchel-Kussell for The Dance Enthusiast: What inspired the creation of BalletNext and what are you exploring in your work?

Michele Wiles: BalletNext came out of a desire to take the next step and really try new things in ballet. Learning classical ballets in a traditional setting there really wasn’t much room for improvisation or creative play. I became interested in thinking about process with ballet and allowing my dancers to participate in the creation of movement.  We have collaborated with jazz musicians and street dancers – the goal is to keep pushing the limits of what ballet can be.

TDE: What are you exploring in your newest piece 4.0?

MW: I have a company of powerful female dancers and there is a strong sense of community. The new piece is a celebration of  that togetherness. We have also been working with Jay Donn, an icon in the street dance world and pioneer in the Brooklyn-based style of Flex dance. Fusing his highly animated movements with ballet has completely innovated the form.

TDE: You are expecting a baby early this winter? How has this impacted your work as a dancer and choreographer?

MW: I’ve been really lucky and I have been able to move throughout almost all of my pregnancy. Obviously, I have to take certain things easy, but I am still taking ballet class most days and still putting on my pointe shoes to keep my feet in shape. I actually find that I have had a new sense of creative energy as well, and it has helped in creating new work.

TDE: For many years, pregnancy and motherhood were seen as a career ender in ballet. How do you think things have changed?

MW: I think as we learn to take better care of our bodies, we can see just how resilient and powerful the female body can be. There have been other examples in ballet like Julie Kent and Alessandra Ferri, who have danced many years after having babies. The female body is an amazing thing, and I’ve gained even more respect for it being pregnant. The body is doing it’s own type of choreography, and it’s really beautiful.

Share your #AudienceReview of this show or others for a chance to win a $75 giftcard to Trader Joe's. Click here.

A Dance Enthusiast's A to Z: Q is for Wanyue Qiao and Shirlene Quigley