THE DANCE ENTHUSIAST WANTS TO KNOW WHAT YOU'RE DOING THIS SUMMER

THE DANCE ENTHUSIAST ... wanders the web, studios, theaters, offices and streets to uncover the antics of enthusiastic fans of Terpsichore. WANTS TO KNOW:

WHAT ARE YOU DOING THIS SUMMER? (ok not very original but I still want to know)

Nancy, What Are You Doin’This Summer?

Finally, building a website for ALL things DANCE that I do.

Editing the next D&M Press Book.

A lot of yoga.

Eleanor, What Are You Doin’ This Summer?

And Why we love action (Mette Ingvartsen) in Uzes, France.

Alexandra, What Are You Doin’ This Summer?

I am teaching for a week in Russia (St Petersburg) at the Open Look Festival (June 30-July 7).

I am doing a bit of networking and meetings in Holland with some presenters, and probably a few master classes while there.

I am performing my solo show, "us" at the Berkshire Fringe Festival in MA July 17-21.

I am teaching a Composition workshop at DNA (as well as the usual Guest Artist stuff) July 21-28.

I am working on grant writing, company infrastructure and finding a presenter for my next season. 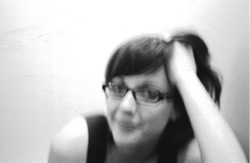 Lauren, What Are You Doin’ This Summer?

I am going on tour with Stephen Petronio Dance Company, The New York Neo-Futurists, and a few other folks.

I am hiding out at various summer stock theaters. I hope to be subletting and thoroughly nomadic.

Dan, What Are You Doin’ This Summer?

New show, "Vicious Dogs on Premises" at the Ontological-Hysteric Theater, May 29-June 14.

Taking it to Romania in July.

Probably taking our 2006 show, "Dancing vs. The Rat Experiment", to Romania in October.

Laura, What Are You Doin’ This Summer?

We will be performing new work at the Byrdcliffe Theatre in Woodstock, NY July 25th and 26th in the Annual Choreographers Concert.

I will be going to my tiniest dancer's (Heather Garbrandt’s) big fat Greek wedding.

Nejla, what are you doing this summer?

"I will be performing my solo program in Avignon, France as part of the Festival OFF d'Avignon at the Gilgamesh Theater for a three week run in July with performances daily."

August I will be in Berlin, Germany for two weeks collecting footage for my next piece to be premiered in 2009.

The last two weeks I will be in Istanbul, Turkey to perform and give workshops for two weeks as well as prepare for a project for 2010.

Jonathan, What are you doing this summer?

WELL, I DO TRY TO MAKE IT TO SIX FLAGS ONCE A YEAR AND IT WILL INDEED HAPPEN THIS SUMMER....IT FEEDS MY SOUL. I NEVER MISS A NINE INCH NAILS TOUR SO I'LL BE SEEING THEM TWICE IN AUGUST...TRENT REZNOR GROUNDS ME.

I'M ALSO PLANNING A PHOTO PROJECT...INSPIRED BY MY INVESTIGATIONS INTO THE THEMES OF INFERNO. LIKE MOST PROJECTS IT'S STARTING SMALL AND EXPERIMENTAL...BUT I THINK IT HAS REAL POTENTIAL. MY BIG NEWS IS THAT I'M FINISHING MY DIVINE COMEDY PROJECT...BELIEVE IT OR NOT THIS IS TRULY MY FUN SUMMER PLAN. "PURGATORY" HAS BEEN FASCINATING AND NOW "PARADISE" IS A TRUE JOY. IT'S LIKE HANGING OUT IN CENTRAL PARK WITH A BUNCH OF MY CLOSEST FRIENDS! AFTER IT'S PREMIERE ON JUNE 14TH AT A GORGEOUS CHURCH IN THE BRONX WE'LL BE TAKING IT TO THE OTHER BOROUGHS IN OTHER SACRED SPACES (CHURCHES, SYNAGOGUES, TEMPLES)...IT'S AN AWESOME PROJECT.