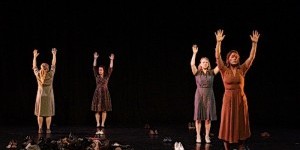 The Dance Enthusiast Asks Ron Honsa, the Director of "Never Stand Still" about his Movie, His Thoughts on Dancers, and Jacob's Pillow

Work, Family, and Life as a Woman Creating and Breaking Boundaries

Nel Shelby, one of the most renowned videographers in the world of dance, has filmed a range of clients from American Ballet Theatre II to Keigwin + Company to The New York Public Library for the Performing Arts. Following her 11th summer at Jacob’s Pillow, she sat down with The Dance Enthusiast to talk about her work, her family, and her life as a woman creating and breaking boundaries.

A. Nia Austin-Edwards for The Dance Enthusiast: Let’s start with your work this summer at Jacob’s Pillow and Vail...

Nel Shelby: I’m the head videographer at Jacob’s Pillow Dance Festival. I have a team of two interns, a video apprentice, and the Virtual Pillow Video Manager. He’s responsible for getting curated content online.

At the Pillow, we film everything - the outdoor performances, the talks, and we work with the marketing department. If there is a show we need to sell more, we’ll create a promotional video.

This past summer we made a video about the internship program, which is a huge part of the Pillow. There are 33 interns there, and they pretty much run the festival. I think there are more interns than staff members. So Christopher (my husband) and I shot interviews with former interns - as far back as 15 years - talking about the impact the program made on them.

And then I spent 2 weeks at The Vail International Dance Festival. Right before I got there, I made a documentary about the Festival, a 30 minute piece that aired on PBS in Colorado. Going to Vail has been a new experience. Damian [Woetzel] has a completely different vision for what he wants there. There’s a lot of creation, as opposed to the Pillow, where the companies come in with their shows already done.

Last summer he commissioned Brian Brooks to make a piece for Wendy Whelan. I made a video about the making of it, and people caught on to that. It’s exciting! It created a lot of momentum for Wendy’s next project, Restless Creature.

TDE: Speaking of Christopher, tell me about the joys and the challenges of working with your husband.

NS: I think there are more joys than challenges, for sure. I had my company going before he started his. He always states that I gave him the courage to start his own thing, because he was in the corporate world before. We’ve been doing this ride together in terms of owning our own businesses. I think it helps a lot that we own separate businesses. So we can step away from each other and ask each other for advice, but we also don’t step on each other’s toes as much.

We also have lived in a one bedroom apartment for the past 8 years, and we worked out of that apartment.  I think we just made it work being in close quarters. We’d both throw ideas at each other. I know one frustration for friends and colleagues is that they don’t have anyone there constantly to bounce ideas off of. It’s so nice that Christopher and I have each other for that.

I really do look to him. We both hired a business coach 5 years ago, and Christopher really grabbed onto the marketing. He realized how much he loves marketing, and how important that was to run your business. The joke in the office is “What would Christopher do?”

I don’t want to make it sound like all sunshine and roses, but there’s nothing that we can’t work out.

TDE: Sunshine and roses are quite amazing. It seems y’all have a clear system of collaboration, and that’s what works. So, as you prepare to get your little one into Kindergarten, thinking into the future, do you think that she will get in on the video business?

NS: Well, she said she wants to be a photographer. I think she’ll be more in the dance world. She said when she gets older that she wants to shoot with me, and I have brought her to dress rehearsals and shows.

She’s really grasped onto this whole dance thing though. She’s become friendly with Wendy Whelan and Brian Brooks. They just adore each other. She’s just been around all of these artists so much, and she takes ballet.

But I mean, who knows? I just want her to be able to do what she’s inspired to do, because that’s what I’m doing.

TDE: That’s exciting. I also heard that you’re working on this documentary called “Where Women Don’t Dance.” Can you tell me a bit about that?

NS: Yes, it has been reincarnated. When Gracie, my daughter, was 18 months old, I got a call from Nejla Yatkin. She was referred to me by the Dance Film Association to go with her to three different countries in Central America.

She felt like she really wanted to document this process. So when I sat down to talk to her, she began telling me her story about growing up as a woman in a Turkish-German family. Her parents come from a Muslim background, and dancing in that culture is seen as a sin. She took a liking to dancing at a young age, so she had to hide this from her family. As she was telling me this, I was like, “Oh my God, why am I just going to Central America to film your company? We should be talking more about your story.”

We had enough funding to make it happen for three weeks. We made the trailer, and then we ran out of money. Now, it’s four years later. This was my first big documentary project. Since then I’ve made the documentary about Vail and I have another film going right now. Amy the marketing manager and I were sitting down doing goals recently, and she’s like “when are you gonna finish that film?”

I think that her story is not just about her, as a woman, but it’s about her perseverance to live her passion and break down those barriers. I feel like she’s giving a lot of people the courage.

TDE: That’s awesome. Broadening that scope, can you tell me a little about things that you’ve witnessed and experiences that you’ve had as a working woman and watching women in the dance world?

NS: When I first started, 11-12 ago, film was more a man’s world. People were surprised that a woman walked up to them with a video camera. I definitely had to be strong in those situations. I had situations where either the men were flirting with me ridiculously or second-guessing my skills.

I realized that in order to make it, I would have to become at peace with it and just keep moving ahead. Honestly, once I had made that decision, I felt more respected. I also feel that respect came a lot from my team and Christopher. He would go on a shoot with me, and they would immediately look to him like he was the boss. He would always turn and say, “She’s the boss. Ask her what’s going on.” He made sure everyone knew I was the one in charge.

I did have a situation for the first time in a while where I walked into a meeting this summer, and a woman stood up and was like, “Oh my God - you’re a woman!” Even she was surprised that I was a woman. I try not to take it too personally. I read Lean In by Sheryl Sandberg. I feel like she gives me a lot of inspiration, running a ginourmous company like Facebook, having her work right next to Mark Zuckerberg, having two kids of her own, and making it happen. I feel like I just had to set my boundaries. If someone needs something immediately at 5pm, I’m giving my daughter dinner, so I can’t answer my phone or e-mail. It’s an ongoing evolution.

Nel Shelby owns and operates Nel Shelby Productions, which is deeply dedicated to the preservation and promotion of dance through filming of live performances, fully edited marketing reels, documentaries and promotional films. She is also Festival Videographer at Jacob’s Pillow and serves as Resident Videographer at the Vail International Dance Festival. Her half-hour documentary on Vail’s festival,The Altitude of Dance, debuted on Rocky Mountain PBS in May 2013, and “Folie a Deux,” a short film created with Adam Barruch Dance was selected and screened at the Dance on Camera Festival in New York City and Dance Screen in San Francisco. Nel has a B.A. in dance, a B.S. in broadcast video, and is a certified Pilates instructor. She often collaborates with her husband, dance photographer Christopher Duggan. www.nelshelby.com